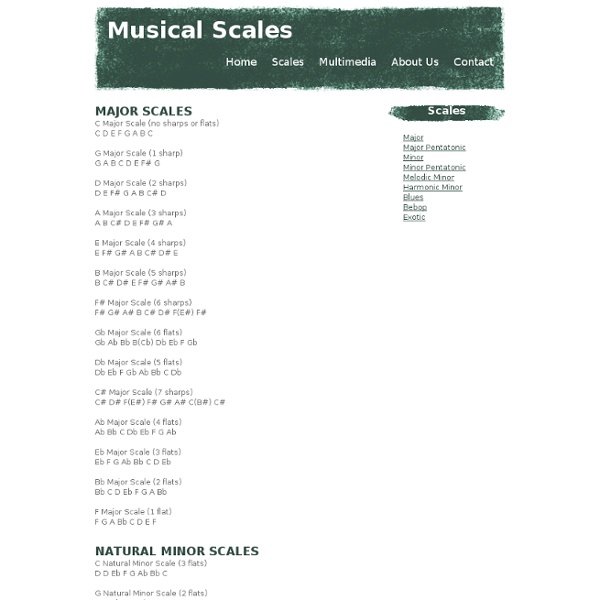 Learning and Loving Music Theory Kelvin, You actually caught a mistake on the roman numerals! Thanks, I’ll have to fix that. Scales and emotions See also a post about making chords from scales. So maybe you want to write a song or an instrumental in a particular mood or style, and you’re feeling overwhelmed by all the scales. Here’s a handy guide to the commonly used scales in Western pop, rock, jazz, blues and so on. Click each image to play the scale right in your browser with the aQWERTYon. These scales have a major third (E in the key of C), which makes them feel happy or bright.

How to construct chords - Piano Clues: Free tips and lessons for playing piano, organ and electronic keyboard You don’t need a “1000 Chords Dictionary” to be able to read and play chords. You can learn how to form chords on your own, because chords are built using simple formulas. A chord is three or more notes played at the same time. It’s as simple as that. Of course, the trick is to know which three notes… Songwriting Exercises - Handout Songwriting Exercises by Joel Mabus Scaffolding Stuck? Harmony Explained: Progress Towards A Scientific Theory of Music The Major Scale, The Standard Chord Dictionary, and The Difference of Feeling Between The Major and Minor Triads Explained from the First Principles of Physics and Computation; The Theory of Helmholtz Shown To Be Incomplete and The Theory of Terhardt and Some Others Considered Daniel Shawcross Wilkerson Begun 23 September 2006; this version 19 February 2012. Abstract and Introduction Most music theory books are like medieval medical textbooks: they contain unjustified superstition, non-reasoning, and funny symbols glorified by Latin phrases.

Better Guitar - Guitar Songs You Should Learn. There are certain songs that every guitar player should try to learn. Either they are commonly requested or they have cool guitar parts that will expand your playing skills. I am going to list songs in several styles of music and explain why I think they should be add to your “play list.” Speak from day 1 You don’t have to be “gifted” to learn a new language, but you do have to be smart about how you learn it. Hi! When you’ve watched the video above and are ready to join the thousands of other language hackers who are using the Fluent in 3 Months PREMIUM package as an unconventional approach to learn languages quickly, click the button below. If you’ve got any questions after watching the video, check out the “Frequently Asked Questions” page.

Best Quotes of All Time It’s been three years since we shared our original list of some of the best quotes of all time, and we felt it was a good time for an update. We’ve added another 25 quotes for you. But these aren’t just any quotes. These are quotes designed to inspire. They’re motivational quotes that will hopefully get you thinking about your life, your work, or your dreams and how you can make these things better. The Chord Guide: Pt I - Chord Progressions Chord progressions are the canvas on which musicians paint their masterpieces, and it’s a canvas which is a piece of art in itself. A chord progression can be subtle and in the background or it can be blatant and up front; it can be simple and catchy, or it can be technical and complex, it can stay in one key or it can change like the seasons. In any of these cases a chord progression is what drives the song as it literally shapes the music that accompanies it.

Products : Overview : Music Software How Music Works is a comprehensive suite of multimedia tutorials which explain music in clear, simple language you can relate to. Packed with 115 topics in nine tutorials, and illustrated with 360 diagrams and 750 demonstration sounds, the tutorials start with the very basics of music and advance to topics which are valuable even for professional musicians. Whatever musical instrument or style you are interested in, these tutorials will be an essential source of information and guidance for years to come. The How Music Works tutorials are available online at www.howmusicworks.org but these tutorials are not printable and do not have the sounds.

30+ Insanely Useful Websites for Guitarists The guitar is an instrument that knows no genre and no boundaries--one of the reasons why it's arguably the world's most beloved instrument. Here are over 30 incredibly useful (and often entertaining) websites dedicated to the guitar and its admirers. Must-see sites 1. Guitar Shred Show follows the escapades of Mr. Useful Websites Here is a list of websites we have featured in the past that might come in handy. Remember to set FuckingHomepage.com as your start page if you haven’t already. Educational/Learning The Cube Game - Find Out The True Nature Of People In this video I am going to play with you The Cube game. This psychological game is from the book “Secrets of the Cube” . Watch the video, remember your answers and check the meanings of your imagined objects below.

How to read sheet music... a free course. The Mystery of Sheet Music To many people, reading sheet music is an intimidating, mysterious activity. But it doesn't need to be! It's actually quite simple, once you understand the secret behind it.

Great so if I have problems I'll ask you :3 by damniel Jun 1

Daniel - YouTube has a lot of great stuff on Modes.. Try it out. Bars and honkey tonks are little resturants that serve alcholic drinks that are favored by local residents. by lynnylouwho Apr 22

Dear Daniel: Thanks for writing. I'm actually not a musician. I just thought these sites might be valuable to someone else who is. I think you know what "bars" are, and "honky tonks" are night clubs. It's a term from the 1920s and 1930s, if I'm not mistaken, You might look up words like "honky tonk" on Wikipedia, since it's an excellent source of information. ¡Buena suerte! by philvenditti Apr 22

Also... where can I find good content about Modes... I know something about Phrygian, Mixolydian, Aeolian modes but don't give a s**t on how to use them... please could you direct me to the right place? LOVE Daniel haha! by damniel Apr 22

I didn't understand half what you say... half because I'm not american, half cuz' my first language was Spanish so... what does "bars and honky tonks" means in a respectful use os the launguage... xD ok I'm overreacting... but could you explain? by damniel Apr 22

I played guitar professionaly for many many mnay years. In bars and honky tonks in the NE USA. Now I am a harp therapist starting my own training program. When you are looking for scales, don't forget to try some modes, too. Enjoy the musical journey! by lynnylouwho Apr 16

yeah and I want to play about three (my voice's included) :3 but those are GUITAR, piano (keyboard) and a kind of Barney Bellamy's voice by damniel Apr 15

what are you looking for exactly? Do you play an instrument? by lynnylouwho Apr 15

Yep.. I am with you.. gotta love it when I makes is simple. by lynnylouwho Apr 5