RSA Animate - Language as a Window into Human Nature 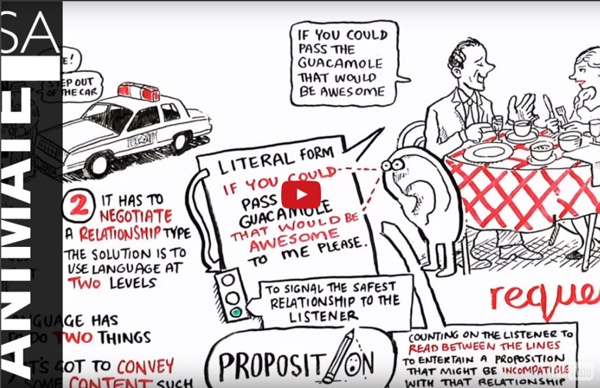 Capital - You need to go back to school to relearn English Until seven years ago, Chicago-born Ben Barron had worked only with fellow Americans. But when he took a job with Zurich Insurance Company, an international company headquartered in Switzerland, Barron found that his new colleagues across Europe, who used English as a shared language, had difficulty understanding him. “Fortunately I was surrounded by people who would stop and say things like, ‘So what do you mean by that?’ and make me clarify,” he recalls.

Languages Grew From a Seed in Africa, a Study Says The finding fits well with the evidence from fossil skulls and DNA that modern humans originated in Africa. It also implies, though does not prove, that modern language originated only once, an issue of considerable controversy among linguists. The detection of such an ancient signal in language is surprising. Because words change so rapidly, many linguists think that languages cannot be traced very far back in time. Why We Need to Study the Brain’s Evolution in Order to Understand the Modern Mind Image via Wikimedia Commons, adapted from Christopher Walsh, Harvard Medical School, by Gary2863 In the September 17th issue of The New Yorker, Anthony Gottlieb analyzes Homo Mysterious: Evolutionary Puzzles of Human Nature, a new book by David Barash, a psychology professor at the University of Washington in Seattle. Gottlieb’s article is more than just a book review—it’s also the latest in a long line of critiques of evolutionary psychology, the study of the brain, mind and behavior in the context of evolution. Gottlieb makes several excellent points, describing the same major shortcomings of evolutionary psychology that critics and proponents alike have named many times before: frustratingly scant evidence of early humans’ intellect, the immense difficulty of objectively testing hypotheses about how early humans behaved, the allure of convenient just-so stories to explain the origins of various mental quirks and talents.

» Get Off Your Butt: 16 Ways to Get Motivated When You’re in a Slump By Leo Babauta Even the most motivated of us — you, me, Tony Robbins — can feel unmotivated at times. In fact, sometimes we get into such a slump that even thinking about making positive changes seems too difficult. Language Quiz: Can You Guess The Language By Listening? Who doesn’t love a punishing language quiz every now and then? If you’re the type of language nerd who can’t back down from a challenge, then we entreat you to try your hand at the following quiz. We selected audio from eight different languages with varying levels of ubiquitousness (just enough to make you second-guess all your choices if you’re not already familiar with how they sound). It’s up to you to choose the correct one, but be warned — you’ll have to select your answer from among a series of choices that all sound very much like they could be correct.

YOU'VE BEEN VERBED Friending, trending, even evidencing and statementing... plenty of nouns are turning into verbs. Anthony Gardner works out what’s going on ... From INTELLIGENT LIFE Magazine, Winter 2010 Mothers and fathers used to bring up children: now they parent. Critics used to review plays: now they critique them. Childhood stimulation key to brain development, study finds Brain scans of participants aged in their late teens showed a correlation between cognitive stimulation at the age of four and a thinner, more developed, cortex Photograph: David Job/Getty Images An early childhood surrounded by books and educational toys will leave positive fingerprints on a person's brain well into their late teens, a two-decade-long research study has shown. Scientists found that the more mental stimulation a child gets around the age of four, the more developed the parts of their brains dedicated to language and cognition will be in the decades ahead. It is known that childhood experience influences brain development but the only evidence scientists have had for this has usually come from extreme cases such as children who had been abused or suffered trauma.

Before I Die What matters most to you Interactive public art project that invites people to share their personal aspirations in public. After losing someone she loved and falling into depression, Chang created this experiment on an abandoned house in her neighborhood to create an anonymous place to help restore perspective and share intimately with her neighbors. How Language Shapes Thought: Scientific American I am standing next to a five-year old girl in pormpuraaw, a small Aboriginal community on the western edge of Cape York in northern Australia. When I ask her to point north, she points precisely and without hesitation. My compass says she is right.

Men's Journal Magazine - Men's Style, Travel, Fitness and Gear Courtesy Michael Finkel These are my final words: "Why a camp chair?" I speak them to a man named Wade. Wade from Minnesota. I'm in line behind him, waiting to enter the Dhamma Giri meditation center, in the quiet hill country of western India, for the official start of the 10-day course. Guerrilla Crochet More info. More info. More info. Two Drunken Dudes Prioritize Language In 'You & Me' With his 2009 The Interrogative Mood: A Novel?, Padgett Powell produced one of the most readable literary oddities of the past decade. In that book, a narrator — perhaps the author himself — fired off questions (and only questions) that come to read less like a novel than a personality test gone haywire: "Should a tree be pruned? Are you perplexed by what to do with underwear whose elastic is spent but which is otherwise in good shape? Do you dance?"

A laughing matter Dishing up tacos and burritos to hungry college students may not sound like much fun, but the women behind the counter at Salsa Rico look like they're having a pretty good time. Their heads are thrown back in laughter as they yell out to each other from either end of the steam tables. Meanwhile, a student grabbing a quick solo meal stands straight-faced near the cash register. Psychology professor Robert Provine, PhD, nods in the direction of the Salsa Rico trio as he takes in the student commons scene.

The Top 10 Relationship Words That Aren't Translatable Into English Here are my top ten words, compiled from online collections, to describe love, desire and relationships that have no real English translation, but that capture subtle realities that even we English speakers have felt once or twice. As I came across these words I’d have the occasional epiphany: “Oh yeah! That’s what I was feeling...” Mamihlapinatapei (Yagan, an indigenous language of Tierra del Fuego): The wordless yet meaningful look shared by two people who desire to initiate something, but are both reluctant to start. Oh yes, this is an exquisite word, compressing a thrilling and scary relationship moment.