To Predict Dating Success, The Secret's In The Pronouns : Shots - Health Blog 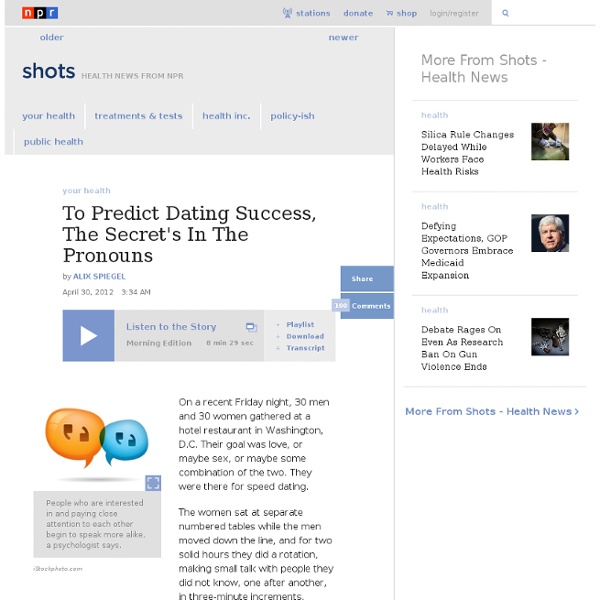 If I was in charge of schools... : mbti Cyclists accuse Toronto mayor Ford of 'war on bikes' 2 May 2012Last updated at 20:49 ET By Jason Margolis PRI's The World VIDEO: Cyclists in Toronto accuse the city's mayor of waging a 'war on bikes'. Toronto's tough-talking mayor has never hidden his disdain for cyclists. Now they are accusing him of trumping up a war on two-wheeled commuters. Bike lanes have been removed but are the city's streets any more dangerous to ride? Rob Ford cruised to victory as city mayor a year-and-a-half ago pledging to end what he dubbed "the war on the car". "And what I compare bike lanes to is swimming with the sharks. "And every year we have dozens of people that get hit by cars or trucks. "My heart bleeds for them when I hear someone gets killed, but it's their own fault at the end of the day." Toronto mayor Rob Ford, right, prides himself on his straight-talking approach - much like Donald Trump. Since Ford came into office, Toronto hasn't just stopped putting in bike lanes; it has started removing some of them. Continue reading the main story

For those who don't remember, MTV actually aired this video. Several times. The Prodigy - Smack My Bitch Up (NSFW) : Music Astronomers see ANOTHER star ripped apart by a black hole! : science Astronomers see ANOTHER star ripped apart by a black hole! Last year, astronomers saw the violent death throes of a star as it was literally torn apart by a black hole (see here, and links within). And now, they’ve seen it again: observations across the electromagnetic spectrum caught another star that wandered too close to a supermassive black hole, and suffered the ultimate fate. These observations show the before-and-after (left versus right) of the event. The top two are from GALEX, a satellite that observes the skies in the ultraviolet, and the bottom using Pan-STARRS1, a powerful telescope (located on which mountain, you ask? The light from the star’s violent demise reached us in June of 2010. The flare happened when the stellar material spiraled into the hole. [You can watch a high-def version of this on the Hubble site.] The material ejected was determined to be mostly helium, a sure sign that the star was old; stars start out mostly hydrogen, and slowly convert it to helium over time. Hmph. Credit: NASA, S. Related Posts:

Css2Less Home Of Happy Wheels - Happy Wheels Full Version Hello pals. I'd like to continue hosting the flash version of Happy Wheels as long as possible. With the loss of certain ad networks, I'm going to try out a few different ad formats on this site as I continue to attempt to regain some of the revenue that went missing. The discord server, which is now official at has been very helpful to me and the game. Though I would prefer to be silent, I feel obligated to say that I am still working full time on the sequel, and it's still reeeeeaally time consuming. ELI5: Kirchoff's current law : explainlikeimfive

Russia warns on missile defence deal with Nato and US 3 May 2012Last updated at 12:22 GMT Russia says it will put more powerful warheads on its own ballistic missiles if the US defence system goes ahead Russia says it is prepared to use "destructive force pre-emptively" if the US goes ahead with controversial plans for a missile defence system based in Central Europe. The warning came after the Russian defence minister said talks on missile defence were nearing a dead end. Moscow fears that missile interceptors would be a threat to Russia's security. But the US and Nato say they are intended to protect against attacks from Iran or North Korea. "A decision to use destructive force pre-emptively will be taken if the situation worsens," chief of the Russian defence staff Gen Nikolai Makarov said. 'Flawed assumptions' Two days of talks opened on Thursday in Moscow between Russia, the US and Nato. Russian Defence Minister Anatoly Serdyukov said the talks were "close to a dead end", but Nato said it remained hopeful of reaching a deal.