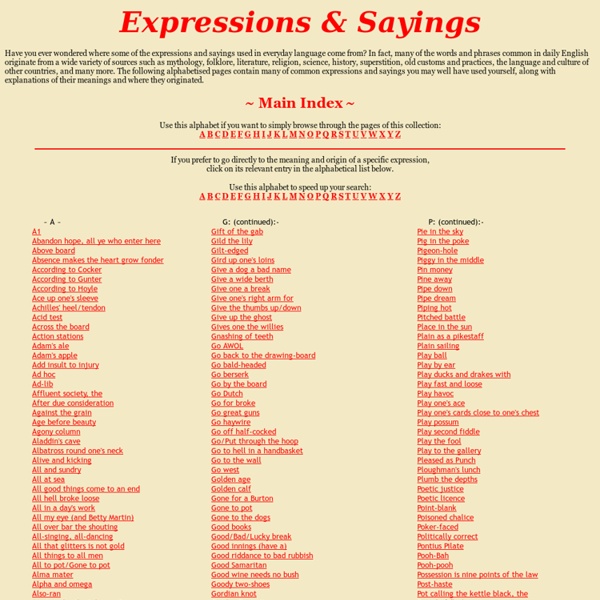 If you prefer to go directly to the meaning and origin of a specific expression, click on its relevant entry in the alphabetical list below. Use this alphabet to speed up your search: A B C D E F G H I J K L M N O P Q R S T U V W X Y Z

Guide for Writers: Latin Phrases It’s a matter of taste and style, but not long ago American writers attempted to demonstrate their credentials to the world by including Latin and French phrases within works. A dash of Latin was expected of the moderately educated throughout the Western world. annus mirabilis - wonderful year arbiter elegantiae - judge of the elegant; one who knows the good things in life bona fides - good faith; credentials How Ancient Cultures Used Healing Crystals And Stones As written by Stephanie Lucas on QuantumStones| “In a crystal we have clear evidence of the existence of a formative life principle, and though we cannot understand the life of a crystal, it is nontheless a living being”. This is a quote from his work “The Problem of Increasing Human Energy” by Nikola Tesla written in the year 1900. Crystals have been thought to be alive and possess healing powers, and many ancient cultures took this to be just another fact of life. Today, we understand that all things in the universe are forms of energy with their own vibration – including crystals. Nikola Tesla declared this concept as the key to understanding the universe and proved how certain forms of energy can alter the vibrational resonance of other forms of energy.

American Slang Dictionary A dictionary that explains commonly used American slang words can be a very useful resource for anyone interested in learning more about how language continues to evolve throughout the United States. YourDictionary includes definitions of the most common of these slang words and provides additional usage information in various slang articles. About Slang in Popular Culture To My Old Master In 1864, after 32 long years in the service of his master, Jourdon Anderson and his wife, Amanda, escaped a life of slavery when Union Army soldiers freed them from the plantation on which they had been working so tirelessly. They grasped the opportunity with vigour, quickly moved to Ohio where Jourdon could find paid work with which to support his growing family, and didn’t look back. Then, a year later, shortly after the end of the Civil War, Jourdon received a desperate letter from Patrick Henry Anderson, the man who used to own him, in which he was asked to return to work on the plantation and rescue his ailing business. Jourdon’s reply to the person who enslaved his family, dictated from his home on August 7th, is everything you could wish for, and quite rightly was subsequently reprinted in numerous newspapers.

Perry Index The Perry Index is a widely used index of "Aesop's Fables" or "Aesopica", the fables credited to Aesop, the story-teller who lived in ancient Greece between 620 and 560 BC. Modern scholarship takes the view that Aesop probably did not compose all of the fables attributed to him;[1] indeed, a few are known to have first been used before Aesop lived, while the first record we have of many others is from well over a millennium after his time. Traditionally, Aesop's fables were arranged alphabetically, which is not helpful to the reader.[2] Perry and Rodriguez Adardos separated the Greek fables from the Latin ones, with the Greek ones first; then they arranged each group chronologically and by source; finally they arranged the fables alphabetically within these groups.[2] This system also does not help the casual reader, but is the best for scholarly purposes.[2] Ben Edwin Perry (1892–1968) was a professor of classics at the University of Illinois at Urbana-Champaign from 1924 to 1960.

There's a Word for That: 25 Expressions You Should Have in Your Vocabulary Recently I came across this amazing little Tumblr named ‘OtherWordly‘ – itself a play on words. It consists of a collection of strange and lovely words from different languages through different times. What I like most about this selection of consonants and vowels – little meaning-carrying packages of vibration – is that they all try to point to the unspeakable, the transient or the neglected. That which we forget in the busyness of our daily grind. Words have the power to remind us – and therefore we should choose our words carefully so we are reminded of the things that nourish our souls.