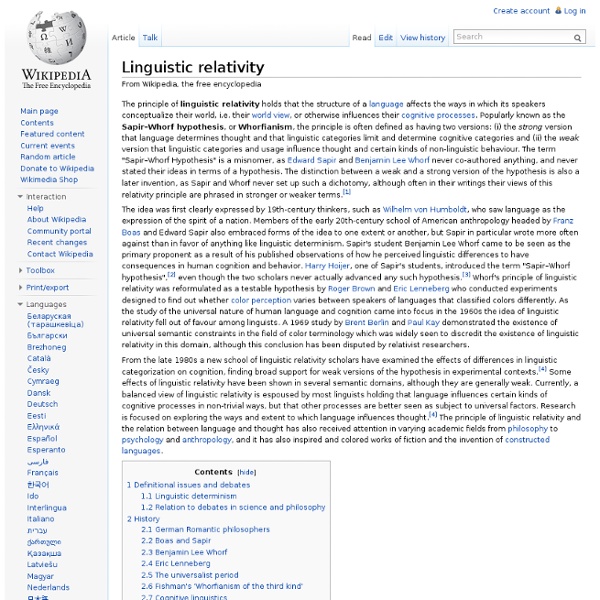 The principle of linguistic relativity holds that the structure of a language affects the ways in which its respective speakers conceptualize their world, i.e. their world view, or otherwise influences their cognitive processes. Popularly known as the Sapir–Whorf hypothesis, or Whorfianism, the principle is often defined to include two versions: Strong version: that language determines thought and that linguistic categories limit and determine cognitive categoriesWeak version: that linguistic categories and usage influence thought and certain kinds of non-linguistic behaviour. The term "Sapir–Whorf hypothesis" is a misnomer, because Edward Sapir and Benjamin Lee Whorf never co-authored anything, and never stated their ideas in terms of a hypothesis. Definitional issues and debates[edit] The concept of linguistic relativity holds that cognitive processes, such as thought and experience, may be influenced by the categories and patterns of the language a person speaks. History[edit]

Fourier series In mathematics, a Fourier series (English pronunciation: /ˈfɔərieɪ/) decomposes periodic functions or periodic signals into the sum of a (possibly infinite) set of simple oscillating functions, namely sines and cosines (or complex exponentials). The Discrete-time Fourier transform is a periodic function, often defined in terms of a Fourier series. And the Z-transform reduces to a Fourier series for the important case |z|=1. History[edit] The Fourier series is named in honour of Jean-Baptiste Joseph Fourier (1768–1830), who made important contributions to the study of trigonometric series, after preliminary investigations by Leonhard Euler, Jean le Rond d'Alembert, and Daniel Bernoulli. The heat equation is a partial differential equation. Definition[edit] is a periodic function with period P. Function s(x) (in red) is a sum of six sine functions of different amplitudes and harmonically related frequencies. we can also write the function in these equivalent forms: where: approximates on .

Language and Thought Stacy Phipps December 13, 2001 The Sapir-Whorf Hypothesis has changed the way many people look at the relationship between language, thought and cultural perception of reality. It has influenced many scholars and opened up large areas of study. While many like Edward Sapir and Benjamin Whorf support the notion that language strongly influences thought and others argue that language does not influence thought, the evidence from research indicates that language does influence thought and perception of reality to a degree but language does not govern thought or reality. Language and Thought The relationship between language, thought and reality has occupied philosophers, linguists, anthropologists and psychologists for centuries. Our senses, conversant about particular sensible object, do convey into the mind several distinct perceptions of things according to those various ways wherein those objects affect them. 1. 2. 3. 4. Brown, Roger. 1968. Carroll, John (ed.) 1956. Chaika, Elaine. 1989.

How To Harmonize Your Dual-Boot Setup for Windows and Ubuntu Looking for some harmony between Windows 7 and Ubuntu in your dual-boot setup? Here are a few ways you can make the tense OS situation a little more unified and copacetic. Background When we covered How to Choose a Partition Scheme for Your Linux PC, we noticed that some people were wondering how to use a third partition between Linux and Windows to act as a storage partition. Why It’s Difficult As a few commenters pointed out, you can’t use an NTFS-formatted partition for /home in Linux. Image from cellguru.co.cc, assumed fair use A Work-Around There isn’t a way to run your /home directory from a FAT32 or NTFS partition, so your configuration files and scripts will have to remain there. This isn’t a proper workaround. Linux has come a long way with regards to reading and writing NTFS, and since it’s much better than FAT32 and tougher to configure this setup with, that’s what we’ll be covering in this guide. Partition Scheme Auto-Mount Your Storage Partition (Linux) Prep Work fstab sudo blkid

Why Does My iPhone 4S Now Say 4G, Not 3G? Because It Is* 4G? Psh. Tell us when a software update transforms our phones into 5G devices: Then we'll be excited. Yes, you read that right. A Tuesday software update released by Apple bumped all iOS devices up to version 5.1 of the operating system. In other words, Apple has finally patented a method for upgrading the hardware of one's device over the airwaves. We kid. Much has been written about how AT&T's playing a "marketing game" with the 4G terminology, but is it really the carrier's fault that it brands non-LTE devices as "4G?" Spoiler: All of the major U.S. carriers share a little blame. When the International Telecommunications Union (ITU) released its first definition of "4G," the umbrella term included just two networking technologies: WiMax 2 and LTE-Advanced, representing two standards that could hit the ITU's "4G" speed requirements of 100 Mbps while mobile and 1 Gbps while stationary. So how did the carriers solve this dilemma? Confused?

Invent Your Own Computer Games with Python - Learn how to program with a free ebook programming tutorial John R. Ehrenfeld: Sustainability and the Sacred Hacking a metaphor in five steps | Metaphor Hacker - Hacking Metaphors, Frames and Other Ideas Preliminaries 1. Before you start metaphor hacking you must first accept that you don’t have a choice but to speak in some sort of a figurative fashion. 2. Once you’ve done the above, you can start hacking (or really do them at the same time). 1. 2. 3. 4. 5. But driving a metaphor forward is most often a positive experience. This process never stops. Conclusion All good hackers, engineers, journalists or even just members of a school or pub debate club have been hacking at metaphors ever since the phrase “is like” appeared in human language (and possibly even before). George Lakoff and Mark Johnson, Metaphors we live by (Chicago: University of Chicago Press, 1980).Jeffrey R.

theories of metaphor Metaphors are not simply literary devices, but something active in understanding, perhaps even the very basis of language. Read this section for arguments that metaphors organize our experience, uniquely express that experience, and create convincing realities. Poetry, which uses them instinctively, is following a scientific truth. Introduction Metaphor commonly means saying one thing while intending another, making implicit comparisons between things linked by a common feature, perhaps even violating semantic rules. {1} Scientists, logicians and lawyers prefer to stress the literal meaning of words, regarding metaphor as picturesque ornament. But there is the obvious fact that language is built of dead metaphors. Metaphors are therefore active in understanding. Metaphors in Science How does science and scientific prose deal with this most obvious of facts? Linguistic Philosophy Can metaphors be paraphrased in literal terms? Not everyone agrees. Lakoff and Johnson Evidence of Psychology 1.

Should we stop calling people 'overweight'? 30 May 2012Last updated at 12:14 ET By Vanessa Barford BBC News Magazine An MPs' report on body image has advocated the use of "weight-neutral language". So should we stop calling people "overweight"? There are many people who would agree that using the term "fat" to somebody's face is neither helpful or pleasant. But there's a growing movement to get doctors and other public health professionals to stop using words such as "overweight" and "obese" as well. MPs think the terms have a negative impact on body image and self-esteem, and want doctors to promote broader health and lifestyle messages instead. The idea has been gaining momentum for a while. And in March, draft guidance issued by the National Institute for Health and Clinical Excellence said those who were obese should merely be encouraged to get down to a "healthier weight". But not everyone agrees. Somebody with a BMI of 30 or more is classed as obese So does weight terminology need a rethink? Continue reading the main story

New metaphors for sustainability: nine so far « The Center for Sustainable Practice in the Arts This post comes to you from Ashden Directory From the ‘iron curtain’ to the ‘glass ceiling’, metaphors are one of the most powerful ways in which we frame the way we think. Yet one of the key concepts in environmentalism – sustainability – seems to be remarkably short of vivid metaphors. So we asked some artists, writers, architects, cultural commentators, environmentalists, activists and scientists to come up with their own metaphors for sustainability. We’ve published nine new metaphors so far. More to follow. Watch a film about four of the new metaphors. Please suggest metaphors of your own. “ashdenizen blog and twitter are consistently among the best sources for information and reflection on developments in the field of arts and climate change in the UK” (2020 Network)The editors are Robert Butler and Wallace Heim.

Words That Don’t Work | George Lakoff By George Lakoff Progressives had some fun last week with Frank Luntz, who told the Republican Governors’ Association that he was scared to death of the Occupy movement and recommended language to combat what the movement had achieved. But the progressive critics mostly just laughed, said his language wouldn’t work, and assumed that if Luntz was scared, everything was hunky-dory. Just keep on saying the words Luntz doesn’t like: capitalism, tax the rich, etc. It’s a trap. When Luntz says he is “scared to death,” he means that the Republicans who hire him are scared to death and he can profit from that fear by offering them new language. What has been learned from the brain and cognitive sciences is that words are defined by fixed frames we use in thinking, frames come in hierarchical systems, and political frames are defined in moral terms, where “morality” is very different for conservatives and progressives. But Luntz is not just addressing his remarks to Republicans. Like this:

Birdsong Not Music, After All In the Hans Christian Andersen tale "The Nightingale," a songbird melts an emperor's heart with its singing, but flies away when the ruler forces it to sing duets with a jeweled, mechanical bird that warbles only waltzes. There's a moral here, a new study suggests. Although humans have long attributed musical qualities to birdsong, cold, hard statistics show that's all an illusion. The birds we prize most for their songs sound most like the human voice, says Robert Zatorre, a cognitive neuroscientist at McGill University in Montreal, Canada, who was not involved in the study. Billions of potential notes exist between the low and high notes in an octave. Unlike a piano, a human or bird is capable of making seamless transitions between notes without paying heed to any definite scale, blurring intervals willy-nilly. The study, published in this month’s issue of Animal Behavior, shows that the resemblance between a nightingale wren's song and music is nothing more than a coincidence.