Harmony Explained: Progress Towards A Scientific Theory of Music 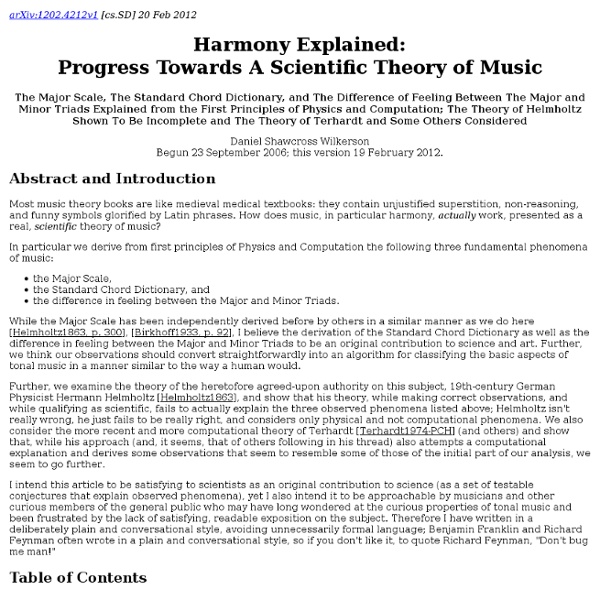 Music Monday: Best Basslines Happy Music Monday! Today we're gonna talk about basslines, those things you never notice unless they're very, very, very good. But when they are, boy do they improve a song, right? Scott's picked five good ones but overlooked several on purpose, in hopes you might call him out on what he's missed. Go on, start taking notes so you can put him in his place. Here's the first one: Outline of basic music theory - www.oscarvandillen.com Professional music theory: an outline of basic music theory. Preface and Chapter 1 of the Outline of basic music theory – by Oscar van Dillen ©2011-2014 The beginner’s learning book can be found at Basic elements of music theory. Overview of chapters: Chapter 1: Introduction Chapter 2: Sound and hearing Chapter 3: Musical notation Chapter 4: Basic building blocks of melody and harmony Chapter 5: Consonance and dissonance Chapter 6: Circle of fifths and transposition Chapter 7: Concerning rhythm, melody, harmony and form Chapter 8: Further study Preface

Scales and emotions See also a post about making chords from scales. So maybe you want to write a song or an instrumental in a particular mood or style, and you’re feeling overwhelmed by all the scales. Here’s a handy guide to the commonly used scales in Western pop, rock, jazz, blues and so on. Click each image to play the scale right in your browser with the aQWERTYon. Interactive Circle of Fifths 1.) Click on a key name (C,D, Ab, G# etc…) to spin the circle until that key is at the top. The name in the red oval should always be the key you are interested in so make sure it is at the top. You are now working in that MAJOR key. 2.)

Bucket List: 225 Things to Do Before You Die 211. Zip Line in Monteverde, Costa Rica Zip line above and through the foggy, almost mystical cloud forests of gorgeous Monteverde in Costa Rica. These lines, courtesy of Costa Rica Sky Adventures, span mountain-to-mountain, shooting zip-liners (i.e. you!) over the jungle at up to 330ft and speeds approaching 40mph. How to be a Rock Star in 5 Minutes: The 4 Chords to Stardom Sharebar Many of the greatest rock and pop hits from the past 40 years only use the same 4 chords. THE SAME 4 CHORDS. So if you were every thinking of being a rock or pop star, well then all you gotta do is keep writing sappy love songs using these same 4 chords until you make that hit!

Music, Mind, and Meaning This is a revised version of AI Memo No. 616, MIT Artificial Intelligence Laboratory. An earlier published version appeared in Music, Mind, and Brain: The Neuropsychology of Music (Manfred Clynes, ed.) Plenum, New York, 1981 Why Do We Like Music? Why do we like music? The Problem With Music Whenever I talk to a band who are about to sign with a major label, I always end up thinking of them in a particular context. I imagine a trench, about four feet wide and five feet deep, maybe sixty yards long, filled with runny, decaying shit. I imagine these people, some of them good friends, some of them barely acquaintances, at one end of this trench. I also imagine a faceless industry lackey at the other end holding a fountain pen and a contract waiting to be signed. Nobody can see what's printed on the contract.

Top 50 Youtube Guitar Channels The Top 50 Youtube Guitar Channels covers lessons, magazines, manufacturers, guitar stores, reviews, guitarists, and pretty much everything guitar centric. All of the channels below had reached at least 2 million total views by March of 2012. Our focus was on channels producing high quality guitar videos at regular intervals. 1. GuitarJamz.com #1 (martyzsongs) 155,460,210 views – guitar tabs 2. List of common misconceptions From Wikipedia, the free encyclopedia This incomplete list is not intended to be exhaustive. This list corrects erroneous beliefs that are currently widely held about notable topics. Each misconception and the corresponding facts have been discussed in published literature. Note that each entry is formatted as a correction; the misconceptions themselves are implied rather than stated.