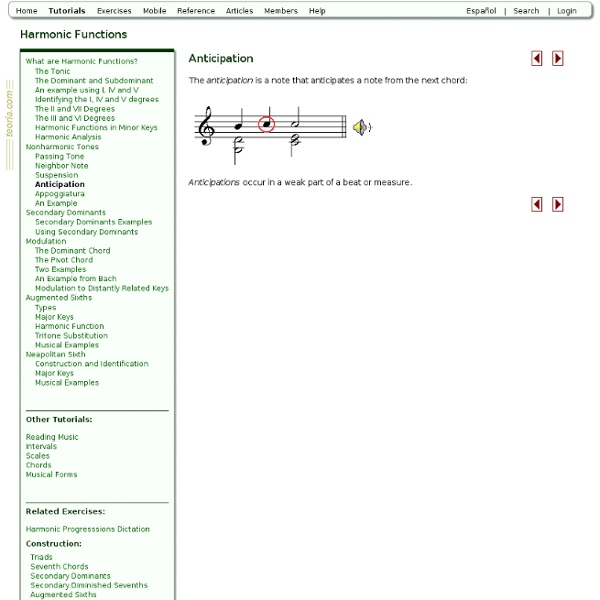 Scales and emotions See also a post about making chords from scales. So maybe you want to write a song or an instrumental in a particular mood or style, and you’re feeling overwhelmed by all the scales. Here’s a handy guide to the commonly used scales in Western pop, rock, jazz, blues and so on. Click each image to play the scale right in your browser with the aQWERTYon. These scales have a major third (E in the key of C), which makes them feel happy or bright. Major scale Happy; can be majestic or sentimental when slow. Mixolydian mode Bluesy, rock; can also be exotic/modal. Lydian mode Ethereal, dreamy, futuristic. Lydian dominant mode Also known as the overtone scale or acoustic scale, because it is close to the first seven pitches in the natural overtone series. Phrygian dominant mode Exotic, Middle Eastern, Jewish. Harmonic major scale Majestic, mysterious. These scales have a flat third (E-flat in the key of C), which gives them a darker and more tragic feel. Natural minor scale (Aeolian mode) Dorian mode

Harmonic Progressions | Learning and Loving Music Theory - StumbleUpon Kelvin, You actually caught a mistake on the roman numerals! Thanks, I’ll have to fix that. The first and last chords of the progression are not 7th chords. Somehow I inadvertently typed “I7″ on the first chord of all the major keys. (Notice that I didn’t do that for the minor keys.) In the classical tradition, for the sake of stability, the first and last chords of a circle-of-fifths progression are usually triads, not 7th chords. Harmonic Sequences Part 2 In the jazz tradition all chords usually are 7ths, in which case the progression will start and end with 7th chords. Thanks again for your interest and input.

stereomood – emotional internet radio - music for my mood and activities Music Theory & Ear Training How to construct chords - Piano Clues: Free tips and lessons for playing piano, organ and electronic keyboard You don’t need a “1000 Chords Dictionary” to be able to read and play chords. You can learn how to form chords on your own, because chords are built using simple formulas. A chord is three or more notes played at the same time. It’s as simple as that. Obviously, not all combinations of notes sound good. Of each chord type, there are 12 possible chords: one for each note. The note that names the chord is called the root note. What’s the difference between all these chord types? Chord formulas To form a chord you simply apply a formula to the major scale named by the root tone. So to build any type of chord, you need to know: the major scale for the root tone of that chord, andthe formula for that chord. I am assuming that you already can play the 12 major scales. Let’s put this knowledge into practice. The formula for major chords is: 1 – 3 – 5 We know that the scale for C major is: If we fill in the numbers from the formula, we get: C – E – G. The chart Major chords: Minor chords:

Dry The River: An Oasis Of Calm Amid The Feedback Chord Progressions Chord progressions are the canvas on which musicians paint their masterpieces, and it’s a canvas which is a piece of art in itself. A chord progression can be subtle and in the background or it can be blatant and up front; it can be simple and catchy, or it can be technical and complex, it can stay in one key or it can change like the seasons. In any of these cases a chord progression is what drives the song as it literally shapes the music that accompanies it. Chord progressions are like a cozy home where melody and rhythm can kick their feet up. All the songwriting giants, like John Lennon, Paul McCartney, George Harrison, and Bob Dylan, to name a few, have/had a tremendous knowledge of the art of the chord progression. I’m not going to promise you tremendous knowledge, but I will offer you a good head start in the way of making your own music – in an easily digestible chunk to boot. Chord Progression Guide Major Chord Chart Above is a chord chart for the 7 most used keys. Chord Theory

How to Notate Musical Rhythm | Learning and Loving Music Theory Notating rhythm often is the most difficult part of music notation. In this music theory lesson, I will show you principles that will help you to notate rhythm in the clearest possible manner. When I teach this lesson in the classroom, I’m often asked, “Why do I have to do it this way?” I always say that you can notate your music any way you want. The secret behind notating rhythm clearly is to clarify the beat, that is, make the beat easy to see on the written score. Measures with No Beat Divisions If a measure has no beat divisions, combine the beats (this is sometimes referred to as beat multiplication): Measures with Beat Divisions Simple Quadruple Meters When a measure has beat divisions in a simple quadruple meter (e.g., common time), beats 1 and 3 should be clearly visible. Simple Triple Meters When a measure has beat divisions in a simple triple meter, there is more flexibility. Compound Meters Measures with Beat Subdivisions Rhythm and Meter Lesson 5 Print This Post

Know Every Note on the Guitar in 9 Days | Deft Digits Guitar Lessons Knowing every note on the guitar is a challenge unique to the instrument. A saxophone has only one way to finger each note, while a guitar usually has a few different strings and four fingers to choose from. String a few notes together and the permutations of how to play them will wreck your brain. The challenge with navigating the guitar fretboard is its two-dimensional layout. Why Know the Whole Fretboard? If you don’t know every single note on the guitar cold, without hesitation, then I highly recommend taking a little time to get that under your belt. The primary advantage to knowing every note on the fretboard is in creation. If you haven’t started playing yet, come back to this after you’ve learned some music. Day 1: Open Strings From low to high (in pitch), thickest to thinnest, ceiling to floor:E A D G B E Know your open strings like you know your alphabet. Day 2: Structure of the C Major Scale The C major scale is the only major scale without any sharps or flats. Conclusion

Learning and Loving Music Theory Musical composition Musical composition can refer to an original piece of music, the structure of a musical piece, or the process of creating a new piece of music. People who practice composition are called composers. Although today composition is considered to consist of the manipulation of each aspect of music (harmony, melody, form, rhythm, and timbre), according to Jean Benjamin de Laborde (1780): Composition consists in two things only. The first is the ordering and disposing of several sounds...in such a manner that their succession pleases the ear. Musical compositions[edit] A piece of music exists in the form of a composition in musical notation or as a single acoustic event (a live performance or recorded track). Composition as musical form[edit] Composing music[edit] Methods Another method involves free playing of your desired instrument. As technology progresses, new and inventive methods of music composition come about. Structure Composers may decide to divide their music into sections. In the U.S.

Ascension Sounds | Music for a Higher Generation Harmony Barbershop quartets, such as this US Navy group, sing 4-part pieces, made up of a melody line (normally the lead) and 3 harmony parts. Etymology and definitions[edit] The term harmony derives from the Greek ἁρμονία (harmonía), meaning "joint, agreement, concord",[4] from the verb ἁρμόζω (harmozo), "to fit together, to join".[5] The term was often used for the whole field of music, while "music" referred to the arts in general. In Ancient Greece, the term defined the combination of contrasted elements: a higher and lower note.[6] Nevertheless, it is unclear whether the simultaneous sounding of notes was part of ancient Greek musical practice; "harmonía" may have merely provided a system of classification of the relationships between different pitches. In the Middle Ages the term was used to describe two pitches sounding in combination, and in the Renaissance the concept was expanded to denote three pitches sounding together.[6] Historical rules[edit] Types[edit] Close position C major triad.