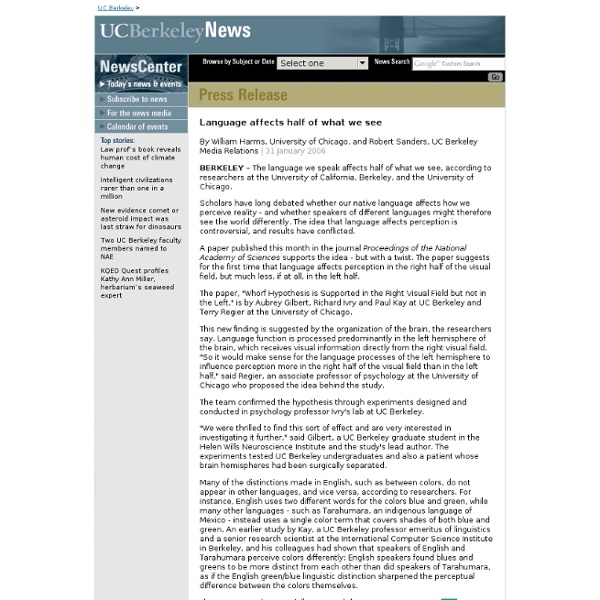 UC Berkeley Press Release Language affects half of what we see By William Harms, University of Chicago, and Robert Sanders, UC Berkeley Media Relations | 31 January 2006 BERKELEY – The language we speak affects half of what we see, according to researchers at the University of California, Berkeley, and the University of Chicago. Scholars have long debated whether our native language affects how we perceive reality - and whether speakers of different languages might therefore see the world differently. A paper published this month in the journal Proceedings of the National Academy of Sciences supports the idea - but with a twist. The paper, "Whorf Hypothesis is Supported in the Right Visual Field but not in the Left," is by Aubrey Gilbert, Richard Ivry and Paul Kay at UC Berkeley and Terry Regier at the University of Chicago. This new finding is suggested by the organization of the brain, the researchers say.

MSNBC - How to Think About the Mind How to Think About the MindNeuroscience shows that the 'soul' is the activity of the brain Sept. 27 issue - Every evening our eyes tell us that the sun sets, while we know that, in fact, the Earth is turning us away from it. Astronomy taught us centuries ago that common sense is not a reliable guide to reality. Today it is neuroscience that is forcing us to readjust our intuitions. Modern neuroscience has shown that there is no user. This resistance is not surprising. The disconnect between our common sense and our best science is not an academic curiosity. Prozac shouldn't be dispensed like mints, of course, but the reason is not that it undermines the will. To many, the scariest prospect is medication that can make us better than well by enhancing mood, memory and attention. In Galileo's time, the counter-intuitive discovery that the Earth moved around the sun was laden with moral danger. Pinker is the Johnstone Family Professor in the psychology department at Harvard.

Does Language Shape What We Think? My seventh-grade English teacher exhorted us to study vocabulary with the following: "We think in words. The more words you know, the more thoughts you can have." This compound notion that language allows you to have ideas otherwise un-haveable, and that by extension people who own different words live in different conceptual worlds -- called "Whorfianism" after its academic evangelist, Benjamin Lee Whorf -- is so pervasive in modern thought as to be unremarkable. Eskimos, as is commonly reported, have myriads of words for snow, affecting how they perceive frozen percipitation. For all its social success, Whorfianism has fared less well scientifically. Oh, and Eskimos don't have all that many words for snow. In fact, scientists have had so much difficulty demonstrating that language affects thought that in 1994 renown psychologist Steven Pinker called Whorfianism dead. The lack of number words had a profound and surprising effect on what the Pirahã could do. But the Pirahã can't count.

Enhancing Brains Editor’s note: In 2008, Henry T. Greely, a professor at Stanford Law School, co-authored a commentary in Nature; it concluded that “safe and effective cognitive enhancers will benefit both the individual and society.” The article inspired an impressive number of responses from readers, and the debate has continued in scholarly journals and the mainstream media in the years following publication. Here Professor Greely builds on that momentum, arguing that only some concerns about cognitive enhancements are justified and proper attention is needed to address such issues. He contends that rather than banning cognitive enhancements, as some have suggested, we should determine rules for their use. Probing that question is my ultimate aim in this article, but we will get there somewhat indirectly. Note first, though, that this is largely a hypothetical discussion, as cognitive enhancement remains largely in the future. Why Cognitive Enhancement—and What Kinds of Enhancements?

Information Processing Theory Humans process information with amazing efficiency and often perform better than highly sophisticated machines at tasks such as problem solving and critical thinking (Halpern, 2003; Kuhn, 1999). Yet despite the remarkable capabilities of the human mind, it was not until the 20th century that researchers developed systematic models of memory, cognition, and thinking. The best articulated and most heavily researched model is the information processing model (IPM), developed in the early 1950s. The IPM consists of three main components, sensory memory, working memory, and long-term memory (see Figure 1). Sensory and working memory enable people to manage limited amounts of incoming information during initial processing, whereas long-term memory serves as a permanent repository for knowledge. Sensory memory processes incoming sensory information for very brief periods of time, usually on the order of 1/2 to 3 seconds. Figure 1 Table 1 pool of limited cognitive resources. Alexander, P.