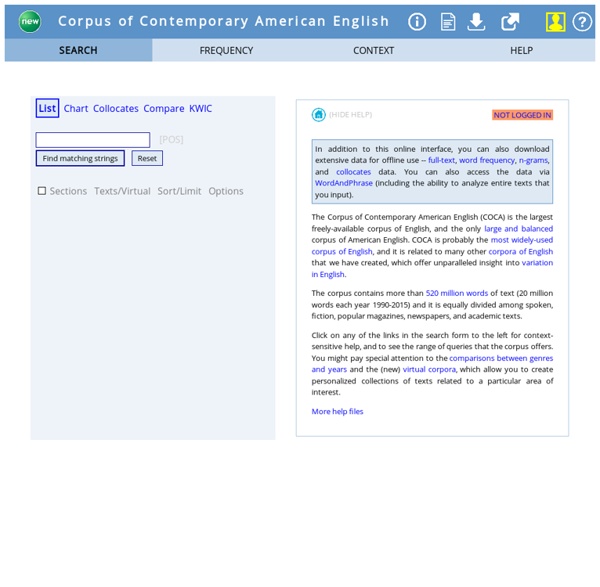 Parable Some scholars of the canonical gospels and the New Testament apply the term "parable" only to the parables of Jesus,[2][3] though that is not a common restriction of the term. Parables such as "The Prodigal Son" are central to Jesus' teaching method in both the canonical narratives and the apocrypha. Etymology[edit] The word parable comes from the Greek παραβολή (parabolē), meaning "comparison, illustration, analogy. 100 Helpful Web Tools for Every Kind of Learner For those unfamiliar with the term, a learning style is a way in which an individual approaches learning. Many people understand material much better when it is presented in one format, for example a lab experiment, than when it is presented in another, like an audio presentation. Determining how you best learn and using materials that cater to this style can be a great way to make school and the entire process of acquiring new information easier and much more intuitive. Here are some great tools that you can use to <a href=">cater to your individual learning style, no matter what that is. Visual Learners

NewYorker article gives insight into the Brand Naming process – and why your brandable domains may be so valuable Naming companies spend months and weed through thousands of names before settling on a new brand name for a major product launch, according to a recent article entitled Famous Names, in the NewYorker. The lengthy article follows a company called Lexicon, and tells the story of the creative process that resulted in the brand names BlackBerry, PowerBook, Swiffer, and Pentium among others. After reading about the amount of time, effort, and brain power devoted to coming up with a new brand name, I have a new appreciation for how valuable the domain name must be that is the exact match for that newly minted product name. The number of high-tech trademarks has jumped from under 10,000 in 1980 to over 300,000 now, according to the article, suggesting a huge demand for brandable domains.

English language is descended from ancient Turkey, experts claim New Zealand scientists say Indo-European language family - including English, French, German and Hindi - originated up to 9,500 years ago in western Asia By Helen Lawson for the Daily Mail Published: 21:09 GMT, 23 August 2012 | Updated: 07:02 GMT, 24 August 2012 English is descended from a language that emerged in Turkey 8,000 and 9,500 years ago, new research suggests. ESL Help Resources Are you learning how to speak English? You've come to the right place! Here, tutors have shared their knowledge so that you won't be confused as to what a preposition is.

Suzette Standring: Teen Empowerment Creates Agents for Positive Change The regenerative power of youth can heal violence. Kids just have to be empowered to do so. Since 2000, 36-year old Craig McClay has been a program coordinator for The Center for Teen Empowerment. He knows firsthand how teens will choose non-violence over aggression if they have hope in their future. Artisan and Fabrication Lab, Purdue University Purdue University Artisan and Fabrication Lab (AFL) The AFL is open to ALL students, faculty & staff at Purdue! Announcements Welcome back students!

English languages English-based creole languages are not generally included, as only their lexicon, not their linguistic structure, comes from English. See also[edit] References[edit] Jump up ^ Nordhoff, Sebastian; Hammarström, Harald; Forkel, Robert; Haspelmath, Martin, eds. (2013). "Anglian". Institute for the Future of the Book - Mission The Mission The printed page is giving way to the networked screen. The Institute for the Future of the Book seeks to chronicle this shift, and impact its development in a positive direction. The Institute is a project of the Annenberg Center for Communication at the University of Southern California, and is based in Brooklyn, New York.

Constitutive Modeling of 3D Printed FDM Parts: Part 2 (Approaches) ·ANSYS Blog In part 1 of this two-part post, I reviewed the challenges in the constitutive modeling of 3D printed parts using the Fused Deposition Modeling (FDM) process. In this second part, I discuss some of the approaches that may be used to enable analyses of FDM parts even in presence of these challenges. I present them below in increasing order of the detail captured by the model. Conservative Value: The simplest method is to represent the material with an isotropic material model using the most conservative value of the 3 directions specified in the material datasheet, such as the one from Stratasys shown below for ULTEM-9085 showing the lower of the two modulii selected. The conservative value can be selected based on the desired risk assessment (e.g. lower modulus if maximum deflection is the key concern). ULTEM-9085 datasheet from Stratasys – selecting the conservative value is the easiest way to enable preliminary analysis

Linguistics 201: The Dialects of American English The Dialects of American English The various Germanic tribes (Angles, Saxons, and Jutes) who invaded Britain after 437 AD brought with them their own dialects of West Germanic. These formed the basis for the emergence of later dialect areas. The submergence of the various British Celtic languages (of which Welsh is the only modern survivor) also lead to innovations in British English. The Viking invasions resulted in more Norse influence in the north than in the south, thereby contributing another layer to the existing dialects.

Comprehension and Collaboration Meet the standards? Celebrate kids' curiosity and questions? Cover the curriculum? Applied Mechanics of Solids (A.F. Bower) Chapter 1 - Introduction Chapter 1 Introduction – Objectives and Applications of Solid Mechanics Solid Mechanics is a collection of physical laws, mathematical techniques, and computer algorithms that can be used to predict the behavior of a solid material that is subjected to mechanical or thermal loading.

Ideas for using corpora to make students more independent in their learning: by sujava Oct 1