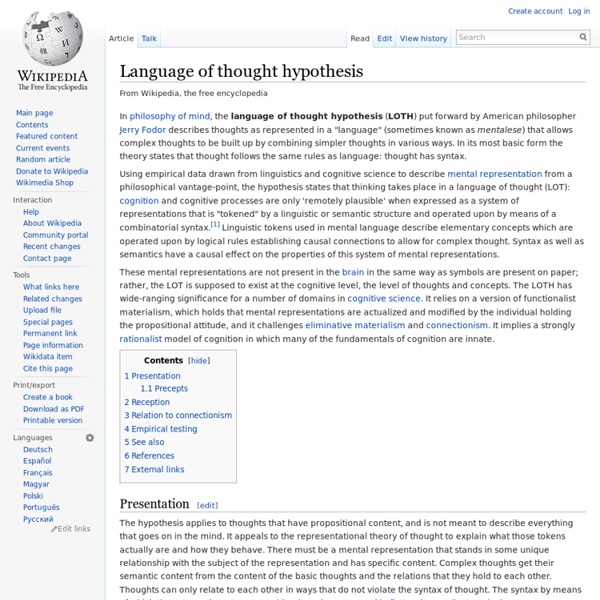 In philosophy of mind, the language of thought hypothesis (LOTH) put forward by American philosopher Jerry Fodor describes thoughts as represented in a "language" (sometimes known as mentalese) that allows complex thoughts to be built up by combining simpler thoughts in various ways. In its most basic form the theory states that thought follows the same rules as language: thought has syntax. These mental representations are not present in the brain in the same way as symbols are present on paper; rather, the LOT is supposed to exist at the cognitive level, the level of thoughts and concepts. The LOTH has wide-ranging significance for a number of domains in cognitive science. It relies on a version of functionalist materialism, which holds that mental representations are actualized and modified by the individual holding the propositional attitude, and it challenges eliminative materialism and connectionism. Presentation[edit] Precepts[edit] 1. 2. Reception[edit] Empirical testing[edit] Related:  Lingüistics • Mentalese

Which Comes First – Vocabulary or Knowledge? « mytokessay “The vocabulary we have does more than communicate our knowledge; it shapes what we can know.” Evaluate this claim with reference to different areas of knowledge. Word Count: 1,699 Knowledge acquisition is a complex process, constantly being influenced and restricted by various factors, and the validity of the knowledge we acquire is often questionable depending on the ways of knowing that are used. In this sense, though vocabulary communicates our knowledge, it can also shape what we can know to a certain extent because it does not represent the totality of reality. Before analyzing the statement, it is necessary to first define ‘vocabulary’. Vocabulary sometimes limits what we can know because it does not always encompass the entire reality of a concept. However, while vocabulary does not always encompass the totality of reality, the absence of vocabulary does not necessarily suggest the absence of knowledge, as the claim indicates. Works Cited: Crane, John, and Hannibal, Jette.

Language of Thought Hypothesis [Internet Encyclopedia of Philosophy] The language of thought hypothesis (LOTH) is the hypothesis that mental representation has a linguistic structure, or in other words, that thought takes place within a mental language. The hypothesis is sometimes expressed as the claim that thoughts are sentences in the head. It is one of a cluster of other hypotheses that together offer a theory of the nature of thought and thinking. The other hypotheses in the cluster include the causal-syntactic theory of mental processes (CSMP), and the representational theory of mind (RTM). The former is the hypothesis that mental processes are causal processes defined over the syntax of mental representations. The latter is the hypothesis that propositional attitudes are relations between subjects and mental representations. LOTH was first introduced by Jerry Fodor in his 1975 book The Language of Thought, and further elaborated and defended in a series of works by Fodor and several collaborators. This article has three main sections. 1. a. b.

Does Language Shape What We Think? My seventh-grade English teacher exhorted us to study vocabulary with the following: "We think in words. The more words you know, the more thoughts you can have." This compound notion that language allows you to have ideas otherwise un-haveable, and that by extension people who own different words live in different conceptual worlds -- called "Whorfianism" after its academic evangelist, Benjamin Lee Whorf -- is so pervasive in modern thought as to be unremarkable. Eskimos, as is commonly reported, have myriads of words for snow, affecting how they perceive frozen percipitation. A popular book on English notes that, unlike English, "French and German can distinguish between knowledge that results from recognition ... and knowledge that results from understanding." For all its social success, Whorfianism has fared less well scientifically. Oh, and Eskimos don't have all that many words for snow. The lack of number words had a profound and surprising effect on what the Pirahã could do.

The Language of Thought: Entry In his (1975) Jerry Fodor offered a bold hypothesis: the medium of thought is an innate language that is distinct from all spoken languages and is semantically expressively complete. So-called "Mentalese" is supposed to be an inner language that contains all of the conceptual resources necessary for any of the propositions that humans can grasp, think or express--in short, the basis of thought and meaning. While few have followed Fodor in adopting this extreme hypothesis, some weaker form of a language of thought (LOT) view, i.e., that there is a mental language that is different from human spoken languages, is held by many philosophers and cognitive scientists. As we will see below, however, although it is fairly clear that (some) thought is linguistic, there is no basis for believing in a Mentalese, let alone an innate, semantically complete Mentalese. Fodor's LOT hypothesis may be divided into five component theses: Representational Realism Linguistic Thought I. (1) I'm very worried. II.

18. Newspeak The whole aim of Newspeak is to narrow the range of thought. 18. Newspeak Newspeak was the official language of Oceania and had been devised to meet the ideological needs of Ingsoc, or English Socialism. It was intended that when Newspeak had been adopted once and for all and the Oldspeak forgotten, a heretical thought - that is, a thought diverging from the principles of Ingsoc - should be literally unthinkable, at least so far as thought is dependent on words. ...All words grouping themselves round the concepts of liberty and equality, for instance, were contained in the single word crimethink, while all words grouping themselves round the concepts of objectivity and rationalism were contained in the single word oldthink. ...So far as it could be contrived, everything that had or might have political significance of any kind was fitted into the B vocabulary. "The Eleventh Edition is the definitive edition," said Syme. Reader asks for doublethink examples: DUCKSPEAKING DOUBLETHINKERS

Everybody in Almost Every Language Says “Huh”? HUH?! Listen to one end of a phone conversation, and you’ll probably hear a rattle of ah’s, um’s and mm-hm’s. Our speech is brimming with these fillers, yet linguistic researchers haven’t paid much attention to them until now. New research by Mark Dingemanse and colleagues at the Max Planck Institute for Psycholinguistics, in Nijmegen, the Netherlands, has uncovered a surprisingly important role for an interjection long dismissed as one of language’s second-class citizens: the humble huh?, a sort of voiced question mark slipped in when you don’t understand something. Dingemanse’s team analyzed recordings of people speaking ten different languages, including Spanish, Chinese and Icelandic, as well as indigenous languages from Ecuador, Australia and Ghana. In each of the languages investigated, the vowel is produced with a relatively relaxed tongue (never a vowel that requires you to lift your tongue, like “ee,” or pull the tongue back, like “oo”). Huh? But why would huh?

The Language of Thought Hypothesis (Stanford Encyclopedia of Philosophy) 1. What is the Language of Thought Hypothesis? LOTH is an empirical thesis about the nature of thought and thinking. LOTH can now be formulated more exactly as a hypothesis about the nature of propositional attitudes and the way we entertain them. Representational Theory of Mind (RTM) (cf. The relation R in (A1), when RTM is combined with (B), is meant to be understood as a computational/functional relation. The Language of Thought Hypothesis is so-called because of (B): token mental representations are like sentences in a language in that they have a syntactically and semantically regimented constituent structure. It is (B2) that makes LOTH a species of the so-called Computational Theory of Mind (CTM). This triadic view seems to have several advantages over the orthodox dyadic view. 2. When viewed this way, scientific theories advanced within the LOTH framework are not, strictly speaking, committed to preserving the folk taxonomy of the mental states in any very exact way. 3. 4. 5.

Tackling Nov 2011 & May 2012 TOK Questions » TOK Essay Comments We aim to give some outline as to how to approach these titles, no more and no less than what your TOK teachers at school would do. Please note that the suggested interpretation is one of various ways possible. There are many ways to approach a TOK essay. Question 1: The command term “evaluate” would require you to argue to what extent you agree with the statement. Understanding the question – In order for knowledge to be generated, does it require the interaction of critical thinking and creative thinking? What not to do – an extensive treatment of what knowledge is all about, the philosophy behind knowledge etc. What to do – focus on ONLY two AOKs. natural sciences and human sciencesnatural sciences and artsnatural sciences and historynatural sciences and ethicsmath with any of the AOKs above (except natural sciences) Links to WOKs – ensure that at least two WOKs are used. Some ideas – one would generally equate natural sciences/math with critical thinking. Question 2: Question 3: