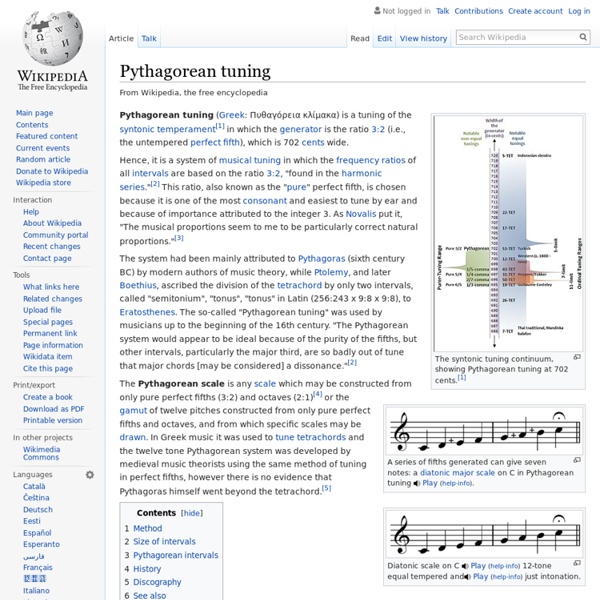 The syntonic tuning continuum, showing Pythagorean tuning at 702 cents.[1] Diatonic scale on C Play 12-tone equal tempered and Play just intonation. Pythagorean (tonic) major chord on C Play (compare Play equal tempered and Play just). Comparison of equal-tempered (black) and Pythagorean (green) intervals showing the relationship between frequency ratio and the intervals' values, in cents. The system had been mainly attributed to Pythagoras (sixth century BC) by modern authors of music theory, while Ptolemy, and later Boethius, ascribed the division of the tetrachord by only two intervals, called "semitonium", "tonus", "tonus" in Latin (256:243 x 9:8 x 9:8), to Eratosthenes. Method[edit] Pythagorean tuning is based on a stack of intervals called perfect fifths, each tuned in the ratio 3:2, the next simplest ratio after 2:1. This succession of eleven 3:2 intervals spans across a wide range of frequency (on a piano keyboard, it encompasses 77 keys). Size of intervals[edit] (e.g. between E♭ and E) Related:  figurative art • just and other tunings • harmonic theory

Why the circle of fourths is so important when learning major scales | Hear and Play Music Learning Center Playing your major scales should be a part of your daily practice regimen. However, practicing them in a “circle of fourths” or “circle of fifths” pattern is even better. Let’s focus more on circle of fourths. If you type “circle of fourths” or “circle of fifths” in google, you can actually find a host of other examples. Notice that the keys go from: C >>> F >>> Bb >>> Eb and so forth. If this were a clock, C would be at 12 o’ clock. This is the optimal way to play your scales. Then play your F major scale all the way through (F G A Bb C D E F). Why the circle? Because music also happens to move in this same pattern (way beyond the scope of this article but I’ll touch on it a little bit). But here’s another reason to use the circle. Because it lets you know how related the major keys are to each other. If one just looked at a piano, they’d assume that C and Db, for example, were related because of how close they appear to each other on the piano. The reality is that C and F are more related.

Egyptian Fractions 1 Egyptian Fractions The ancient Egyptians only used fractions of the form 1/n so any other fraction had to be represented as a sum of such unit fractions and, furthermore, all the unit fractions were different! Why? Is this a better system than our present day one? In fact, it is for some tasks. This page explores some of the history and methods with puzzles and and gives you a summary of computer searches for such representations. This page has an auto-generated Content section which may take a second or two to appear. The calculators on this page also require JavaScript but you appear to have switched JavaScript off (it is disabled). 2 An Introduction to Egyptian Mathematics Some of the oldest writing in the world is on a form of paper made from papyrus reeds that grew all along the Nile river in Egypt. [The image is a link to David Joyce's site on the History of Maths at Clarke University.] So what was on them do you think? 2.1 Henry Rhind and his Papyrus scroll So what did it say? So

Harmony and Proportion: Pythagoras: Music and Space Pythagoras (6th century BC) observed that when the blacksmith struck his anvil, different notes were produced according to the weight of the hammer. Number (in this case amount of weight) seemed to govern musical tone... See if you can hear the sound in your imagination before it comes, by judging from the proportions of the string lengths. Again, number (in this case amount of space) seemed to govern musical tone. He also discovered that if the length of the two strings are in relation to each other 2:3, the difference in pitch is called a fifth: ...and if the length of the strings are in relation to each other 3:4, then the difference is called a fourth. Thus the musical notation of the Greeks, which we have inherited can be expressed mathematically as 1:2:3:4 All this above can be summarised in the following. (Another consonance which the Greeks recognised was the octave plus a fifth, where 9:18 = 1:2, an octave, and 18:27 = 2:3, a fifth;)

Harmonic series (music) Harmonic series of a string with terms written as reciprocals (2/1 written as 1/2). A harmonic series is the sequence of all multiples of a base frequency. Any complex tone "can be described as a combination of many simple periodic waves (i.e., sine waves) or partials, each with its own frequency of vibration, amplitude, and phase."[1] (Fourier analysis) A partial is any of the sine waves by which a complex tone is described. A harmonic (or a harmonic partial) is any of a set of partials that are whole number multiples of a common fundamental frequency.[2] This set includes the fundamental, which is a whole number multiple of itself (1 times itself). Typical pitched instruments are designed to have partials that are close to being harmonics, with very low inharmonicity; therefore, in music theory, and in instrument tuning, it is convenient to speak of the partials in those instruments' sounds as harmonics, even if they have some inharmonicity. An overtone is any partial except the lowest.

432: Sacred Music of the Spheres The Schumann resonance (SR) is a set of spectrum peaks in the extremely low frequency (ELF) portion of the Earth's electromagnetic field spectrum. Schumann resonances are global electromagnetic resonances, excited by lightning discharges in the cavity formed by the Earth surface and the ionosphere. Lightning discharges are considered as the primary natural source of Schumann resonances. Lightning channels behave like a huge antenna which radiates electromagnetic energy as impulsive signals at frequencies below about 100 kHz [15]. These signals are very weak, but the earth-ionosphere waveguide behaves like a resonator at ELF frequencies and amplifies the spectral signals from lightning at the resonance frequencies [15]. In an ideal cavity, the resonant frequency of the n-th mode fn is determined by the Earth radius a and the speed of light c [6]. In physics, resonance is the tendency of a system to oscillate at maximum amplitude at a certain frequency.

Microtonality, Tunings and Modes There is still a lot of good music waiting to be written in C major. — Arnold Schönberg One of the most liberating aspects about using a computer to compose music is that non-traditional “frequency space” can be explored in different ways without having to address the limitations of physical instruments or human performers. This sort of experimentation may involve working with raw, untempered Hertz values, just harmonic ratios, microtonal inflections, or “alternate” tuning systems, which we define very broadly to mean any tuning system other than the standard 12-tone equal tempered scale. But working with an expanded frequency space using MIDI synthesizers will quickly expose a strong bias of MIDI towards the popular music tradition and the Western tonal system in general. MIDI and Microtonal Tuning There are two basic methods for producing microtonal sound on a MIDI synthesizer. Channel Tuning Note by note tuning Equal division tuning Channel Tuning in Common Music Interaction 15-1. Cents