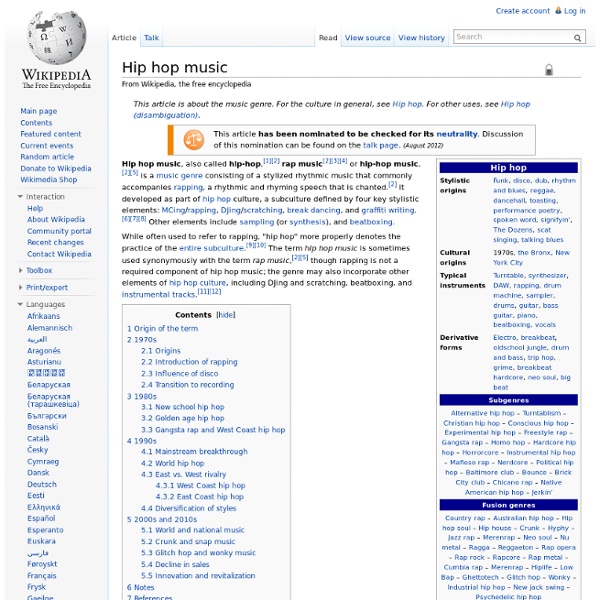 While often used to refer to rapping, "hip hop" more properly denotes the practice of the entire subculture.[9][10] The term hip hop music is sometimes used synonymously with the term rap music,[2][5] though rapping is not a required component of hip hop music; the genre may also incorporate other elements of hip hop culture, including DJing and scratching, beatboxing, and instrumental tracks.[11][12] Origin of the term Creation of the term hip hop is often credited to Keith Cowboy, rapper with Grandmaster Flash and the Furious Five.[13] However, Lovebug Starski, Keith Cowboy, and DJ Hollywood used the term when the music was still known as disco rap.[14] It is believed that Cowboy created the term while teasing a friend who had just joined the U.S. 1970s Origins 1520 Sedgwick Avenue, the Bronx, a venue used by Kool Herc that is often considered the birthplace of hip hop in 1973[18] DJ Kool Herc, recognized as one of the earliest hip hop artists Introduction of rapping Influence of disco 1980s

Learn Keyboard Notes Edit Article All Keyboards88-Key Keyboards and Pianos Edited by RobinElzibab, Teresa, VC, Adamjh99 and 13 others If you're just learning how to play a keyboard instrument, whether it's a MIDI controller, organ, or an 88-key grand piano, learning the notes on the keyboard is a crucial first step. This article will help you get familiar with how the keys are arranged, what the notes are, and get started on a long and musical road. G-funk G-funk, or gangsta-funk, is a sub-genre of hip hop music that emerged from West Coast gangsta rap in the early 1990s. Characteristics[edit] G-funk (which uses funk with an artificially altered tempo) incorporates multi-layered and melodic synthesizers, slow hypnotic grooves, a deep bass, background female vocals, the extensive sampling of P-Funk tunes, and a high-pitched portamento saw wave synthesizer lead. The lyrical content depended on the artist and could consist of sex, drugs, violence, vandalism and women, but also of love for a city, love for friends and relaxing words.

Asher Roth Asher Paul Roth (born August 11, 1985), is an American hip hop recording artist from Morrisville, Pennsylvania. Roth is perhaps best known for his debut single "I Love College". He released his debut studio album Asleep in the Bread Aisle, on April 20, 2009, under Universal Motown, SRC and Schoolboy Records; the latter of which was launched by Roth's former manager Scooter Braun. Roth later left Schoolboy Records in late 2012, due to creative differences with Braun.

Beatboxing 101 - BEAT NYC Beatboxing is a form of vocal percussion primarily involving the art of producing drum beats, rhythm, and musical sounds using one's mouth, lips, tongue, and voice. It may also involve singing, vocal imitation of turntablism, and the simulation of horns, strings, and other musical instruments. The term beatboxing is sometimes used to refer to vocal percussion in general. B.E.A.T.’s mission is to transform the lives of youth in under-served areas through engaging, exciting and culturally relevant music, dance and writing programs which include beatboxing, B-boying/B-girling (breakdance), music production/composition, and creative writing.

Eurodance Eurodance (sometimes known as Euro-NRG, Euro house or otherwise shortened as Euro) is a genre of electronic dance music that originated in the late 1980s, primarily in Europe. It combines many elements of house, hi-NRG and Euro disco.[1] Eurodance production continues to evolve with a more modernized style that incorporates elements from trance and techno music. This genre of music is heavily influenced by the utilization of rich melodic vocals, either exclusively by itself or inclusively with rapped verses. Of Monsters and Men Of Monsters and Men is a winner of the 2013 European Border Breakers Awards. History[edit] Formation and early work (2009–2010)[edit] Musical Texture - Types of Musical Texture Musical texture refers to the number of layers, as well as the type of layers, used in a composition and how these layers are related. Texture may be monophonic, polyphonic or homophonic. Monophonic - Refers to a single melodic line. An example of this is the plainchant or plainsong; a form of medieval church music that involves chanting. Plainchant doesn't use any instrumental accompaniment, instead, it uses words that are sung.