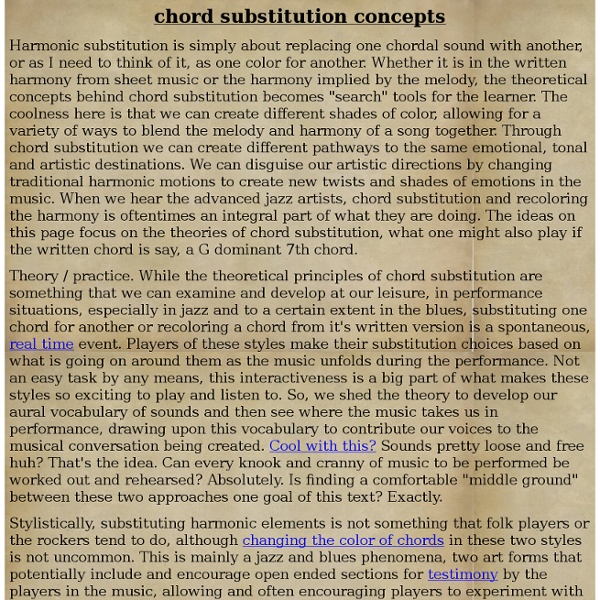 chord substitution concepts Harmonic substitution is simply about replacing one chordal sound with another, or as I need to think of it, as one color for another. Whether it is in the written harmony from sheet music or the harmony implied by the melody, the theoretical concepts behind chord substitution becomes "search" tools for the learner. The coolness here is that we can create different shades of color, allowing for a variety of ways to blend the melody and harmony of a song together. Theory / practice. Stylistically, substituting harmonic elements is not something that folk players or the rockers tend to do, although changing the color of chords in these two styles is not uncommon. So, where do the cool chord substitutions come from? So why is substituting one chord for another potentially important for the creative musician? Chord type. Tonic chord substitutions. Major tonality. Sense how the first inversion has a softer tonic quality than the root position voicing? Cool?

Harmonic Progressions | Learning and Loving Music Theory Kelvin, You actually caught a mistake on the roman numerals! Thanks, I’ll have to fix that. The first and last chords of the progression are not 7th chords. In the classical tradition, for the sake of stability, the first and last chords of a circle-of-fifths progression are usually triads, not 7th chords. Harmonic Sequences Part 2 In the jazz tradition all chords usually are 7ths, in which case the progression will start and end with 7th chords. Thanks again for your interest and input.

Paradigms of Tonal Chord Progression Paradigms of Tonal Chord Progression Robert Kelley Tonal Idioms The passing bass figures between I and I6 can also be used from I6 to I. Pre-Dominant chords can often be inverted and/or used as seventh chords (except bII6) Secondary dominants can be used before most Pre-Dominant chords (i.e. V7/IV IV V7/ii ii) and can appear in any inversion. Return to The Theory & Practice of Tonal Harmony Return to Pedagogical Resources Return to Robert Kelley's Music Website © 2002 Robert T. The Loneliest Whale in the World On their most recent episode of their always-enjoyable Dinner Party Download podcast, American Public Media's Rico Gagliano and Brendan Newnam featured the story of "a lonely whale with vocal problems whose love song supposedly chases lady whales away." According to a 2004 New York Times article on the subject, this particular baleen whale has apparently been tracked by NOAA since 1992, using a "classified array of hydrophones employed by the Navy to monitor enemy submarines." It sings at 52 Hertz, which is roughly the same frequency as the lowest note on a tuba, and much higher than its fellow whales, whose calls fall in the 15 to 25 Hertz range. To make matters worse, the high-pitched whale "does not follow the known migration route of any extant baleen whale species." The cryptozoologist Oll Lewis speculates that the lonely whale might be "a deformed hybrid between two different species of whale," or even "the last surviving member of an unknown species." Photo by Patricia Talmage

List of classical music competitions The European Classical art music idiom has long relied on the institution of music competitions to provide a public forum that identifies the strongest young players and contributes to the establishment of their professional careers. This is a list of classical music competitions. Chamber music[edit] Choral/voice[edit] Composition[edit] Conducting[edit] General[edit] Instrumental[edit] Musicology[edit] Annual Musicology Competition - Worldwide Piano/keyboard[edit] String instruments[edit] Woodwind instruments[edit] Young Musicians[edit] See also[edit] References[edit] External links[edit] Pianist Magazine for people who want to learn how to play the piano or improve playing | Scales and emotions See also a post about making chords from scales. So maybe you want to write a song or an instrumental in a particular mood or style, and you’re feeling overwhelmed by all the scales. Here’s a handy guide to the commonly used scales in Western pop, rock, jazz, blues and so on. Click each image to play the scale right in your browser with the aQWERTYon. These scales have a major third (E in the key of C), which makes them feel happy or bright. Major scale Happy; can be majestic or sentimental when slow. Mixolydian mode Bluesy, rock; can also be exotic/modal. Lydian mode Ethereal, dreamy, futuristic. Lydian dominant mode Also known as the overtone scale or acoustic scale, because it is close to the first seven pitches in the natural overtone series. Phrygian dominant mode Exotic, Middle Eastern, Jewish. Harmonic major scale Majestic, mysterious. These scales have a flat third (E-flat in the key of C), which gives them a darker and more tragic feel. Natural minor scale (Aeolian mode) Dorian mode

Dave Douglas, Banff Workshop - the New Mentorship Process | Greenleaf Music - Dave Douglas jazz blog and store Every time I see a teaching artist talk about music I learn something new. Every time I look at a contemporary book or blog post explaining creative music work I find something I’ve never seen before. Not that I always agree. The conversation in these workshops is often about lineage and tradition, about learning vocabulary and repertoire, how to practice, what to practice. Young musicians are coming up better educated and more informed, with more opportunities for exposure to music than ever before. I recently ran into Dave Liebman on an airplane and he confirmed this. A lot this is provided by independent, non curricular workshops around the globe. First of all, and maybe most important, the thought of getting up every day and looking forward to a full day of music. This describes many of the workshops I have been involved in for the past decade or so. It’s a gift. Aside from just guidance, young musicians need to be heard, listened to, and encouraged in their own pursuits.