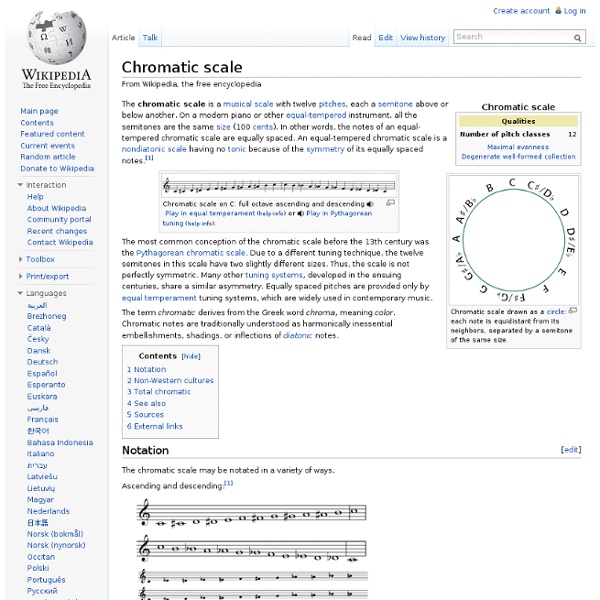 Chromatic scale drawn as a circle: each note is equidistant from its neighbors, separated by a semitone of the same size. The most common conception of the chromatic scale before the 13th century was the Pythagorean chromatic scale. Due to a different tuning technique, the twelve semitones in this scale have two slightly different sizes. Thus, the scale is not perfectly symmetric. The term chromatic derives from the Greek word chroma, meaning color. Notation[edit] The chromatic scale may be notated in a variety of ways. Ascending and descending:[1] The chromatic scale has no set spelling agreed upon by all. Non-Western cultures[edit] Total chromatic[edit] See also[edit] Sources[edit] External links[edit] Recommended Reading[edit] Related:  *docs

Pitch (music) In musical notation, the different vertical positions of notes indicate different pitches. Play top & Play bottom Pitch may be quantified as a frequency, but pitch is not a purely objective physical property; it is a subjective psychoacoustical attribute of sound. In most cases, the pitch of complex sounds such as speech and musical notes corresponds very nearly to the repetition rate of periodic or nearly-periodic sounds, or to the reciprocal of the time interval between repeating similar events in the sound waveform.[8][9] The pitch of complex tones can be ambiguous, meaning that two or more different pitches can be perceived, depending upon the observer.[5] When the actual fundamental frequency can be precisely determined through physical measurement, it may differ from the perceived pitch because of overtones, also known as upper partials, harmonic or otherwise. The relative perception of pitch can be fooled, resulting in aural illusions. Pitches are labeled using:

Montana Magica Lodge: Amazing rainforest hotel shaped like a volcano that spews water Montana Magica lodge lies deep in southern Chile on Unesco nature reserve By Nick Enoch Published: 16:06 GMT, 14 August 2012 | Updated: 18:56 GMT, 14 August 2012 A strange volcano-like building spews water instead of lava; its welcoming windows adorned with moss and vines, complementing the surrounding trees. It looks like the kind of place the blue folk from Avatar might hook up with hobbits and Ewoks to go on holiday. But this is neither Pandora, Middle-Earth nor the Star Wars forest moon of Endor. Deep in southern Chile lies the Montana Magica Lodge - an extraordinary hotel hidden away in the centre of a 300,000-acre private nature reserve. Scroll down for video It might be completely artificial but the Montana Magica lodge in Chile even 'erupts' every day, sending water running down the outside of the 13-room guest house Just the kind of place a hobbit might hang out... at a bar in the hotel, hidden away in the centre of a 300,000-acre private nature reserve at Huilo-Huilo in Los Rios

Keeping up with the Joneses? Mr. and Mrs. Jones finally checked into a mental health clinic... "Who do we follow now?" - I can hear the echo around Walmart. I'm sure I, like many, fit into the world of consumerism as easily as a guru into an Indian ashram. The down side to our current economic model has a far more sinister aspect, one which is cultivated by government, market economies, the media and its use as a tool of manipulation within general society. ::Life Without Traffic Lights - a mini-documentary by SJC: Music by Ainjel Emme - Easier:: [Location: CNR Soi Bua Khao and Soi Dian, South Pattaya City, Thailand]

Social Intelligence; The Social IQ Intelligence is far less favourable in today's society - a reflection of the market driven and socio-economic landscape, an area in which incompetence tends to thrives more often than not. This trend is a win-win for big corporations, large advertising and media who seek to propagate this mentality, and then reward it respectively. Associations can be found when looking at Cannabis prohibition over Alcohol, its legal counterpart. The tendency is to believe - and I would have you to note - stupid people in society, or more the product of social narrownindedness, liken to, "the drunk" are favoured systematically. From my observations: stoned and/or intelligent persons would have a tendency to apply basic problem solving skills more readily, with greater emphasis on design and function; thinking to a higher degree before they purchase a product. Further research needed: 1. 2. 4. 5. Comments and FeedBack: AR Said: Agree agree agree. SJC Said:

:Reflections on the New Paradigm:: A Mobthink Hypothesis: I have some interesting research on,"Mob Theory" and it's modern day context, with specific relationships to aspects of Mob psychology, such as, Groupthink: Mobbing; Mob rules; Mobsters; an angry Mob; lynch Mob; a Mob hunt (Witch hunt, derivative term); or, I was Mobbed; has it's roots in Latin (mobile vulgus "fickle commoners"). The term "Mob" is still in use today, under similar context in spoken and written English. I would like to explore some aspects of it's usage, with you here, and try to put my finger on why one would adopt a negative slanderous term to describe ones self. Under it's negative context Sigmund Freud's looked at Crowd Behaviour Theory, quote:"It is probably the suspicion of this fictitiousness of their own 'group psychology' which makes fascist crowds so merciless and unapproachable. If they would stop to reason for a second, the whole performance would go to pieces, and they would be left to panic." Is this to be true of our Mob down-under?

Documentary: God is in The Neurons God is in The Neurons, It's believed to be - under some mystique - the work of Chiren Boumaaza: Not a standard resume, which I find all the more compelling: a gamer that goes by the handle 'Athene', one who is both liked and disliked by peers, and critics. Bias aside, and on face value, the movie 'God is in The Neurons', touches on some fundamental theories; if anything, those theories which are foremost, in current terms, drivers of today's advancements in technology, such as advanced physics and biology; the sciences and innovation of tomorrow - a good thing? Personally, I relate, and also use similar, 'theories' - ideas if you will - in constructing articles here at 'Reflections Blog'. Although, I know little of "Athene’s Theory of Everything" and should therefore not speculate any further on its origins. I know even less about online gaming...

IPR an Animation Operandi With all this talk about Intellectual Property Rights (IPR) one could be excused in thinking that the more protection available over the Internet for artists and creatives the better - but is it? It's not that often we stray away from the mainstream media channels or our addiction to Facebook: Brenda's latest fluffy kitten pictures, a visual band-aid to compliment our coffee break, between running-the-sums on a data entry spreadsheet and a trip to the toilet. But, if we were to peel ourselves away, we might find an amazing amount of talent out there. Those whose work is screaming quality. And without people with a passion for it, and the resources to spread it, such extraordinary workmanship might indeed be lost. As for the motivation that creates such: not to drown in the shit one is forced to stomach; the side-dish to a promotional spot for Colonel Sanders Kentucky Fried Popcorn Chicken is motivation enough. I'd like to share with you today three animated movies hosted by Vimeo.com.

Yantra Tattooing My years of living in Southeast Asia have made me realize, spiritually and traditional Buddhist philosophy form the dominant cultural norm; a keystone, or network of social cohesiveness by which one gravitates towards a collective social value set. Buddhism has its roots in everyday life here, from basic daily living, to business and economics. And, for the most part, religious practice towards Buddhist values help form the general daily aesthetics - the heart-beat of society, that is, the shroud of Asian life, the colourfulness and vibrancy. It wasn't long until I became acquainted with one such colorful part of the Buddhist tradition, the art of Yantra tattooing: Traditional tattooing is one aspect of Buddhist culture that appeals to me; one beyond the flowers and adornments that swing like pendulums from the rear vision mirrors and handlebar of cars and motorbikes alike. The art of tattooing has been around for centuries in Asian Buddhism. BirthLifeDeath by Yantra Mandala

Bangkok Urban-Gothic I tend to took at it this way: photography is about capturing a moment. I thrive on the idea of spontaneity. Yes, you could drag along a whole production crew with a middle age house wife to manage the sand-pit, and thousands of dollars worth of equipment to compliment people's egos. However, regardless of budget, in some instances it's the emotional context that takes priority. Two of the most important things to remember when working with people, is that, everyone has their own personality. In this set I choose to shoot in Black & White as the contrast between model and graffiti work well. Work by Ben Hodson ▲Title: Bangkok Urban-GothicDescription: Graffiti and Urbex in and around Pattaya-BangkokEquipment: Nikon Coolpix L120.

Life and Flow The vibrancy here is intense: I sat in a little foot massage shop on Soi Bua Khao last nigh. Watching as the dancing dusk danced her soft red light over the tops of the terraced rooves. The housing lining the narrow street scape invisable behind the clutter of wares at street level. Her dance fading, slowly now the life that darkness brings; a surreal neon glow, the miss-proportioned street signs above us draw you into their line of sight.

To Excel People, to Excel... I’m rapidly heading for that age where personal achievement is paramount, an age where we must consider the terms and conditions of who we have become; and thus, strive to achieve some form of balance in respects to our particular place on the big magnet; that which, at best gratifies us to the tune of gratifying others: to strive to excel. Nevertheless being, my excellence is of no greater measure than those I know, respect and admire. It is clear to me, excellence is currently far from a modern social construct; a construct, by which the fruits of society are distributed. Moreover, to excel in a social environment, seems to herald failure, and at best contradicts societies fundamental requirement to exploit, and keep the average a majority. Where is my mind (The Pixies cover) by Maxence Cyrin

The Global Jobs Crisis: Jobs in Asia? Talking about the current jobs crisis and options for foreigners in Asia: from northern China to Singapore, job options for foreign nationals are limited if not tied to, predominantly education, universities, middle schools and teaching English as a second language. This protects the indigenous labour market, while holding no racist stigma, and helps in turn to provide language tools to further exploit western markets. In a drive to export and expand business networks overseas, and for the region. The protectionist values set for the local Asian job markets by governments within the region, puts a cap on the influx of foreign nationals, who might otherwise demand higher salaries, which in turn, raises the export values of commodities into the international trade and export market, used to sell cheap Asian goods to the world. Export, well beyond tourism, is one of the key facilitators of international business and economic relationships with western countries, in Asia.

Persistence Now, if your going to do something well you must be persistent at it, single minded in its delivery: you'll first find a wealth of team players willing to offer up strict advice, guidelines and then support; it's your idea, and as such, only accept sincerity, to the rest, ignore. Keep working at it ... And, dwell upon your task with focus and flow: Sooner or later, your persistence will engage them once again. Their only way to engage at this stage will be imitation and reverse engineering. Continue into the area they call achievement and self satisfaction ... with this achievement comes one question: What the fuck have you done? Music to be inspired::Chinese Man Records - "Goals" by LeYan:: Goals by ChineseMan