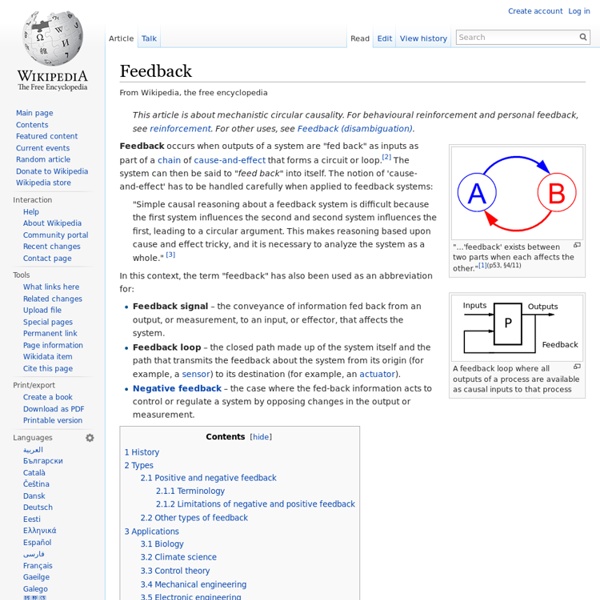 "...'feedback' exists between two parts when each affects the other."[1](p53, §4/11) A feedback loop where all outputs of a process are available as causal inputs to that process "Simple causal reasoning about a feedback system is difficult because the first system influences the second and second system influences the first, leading to a circular argument. In this context, the term "feedback" has also been used as an abbreviation for: Feedback signal – the conveyance of information fed back from an output, or measurement, to an input, or effector, that affects the system.Feedback loop – the closed path made up of the system itself and the path that transmits the feedback about the system from its origin (for example, a sensor) to its destination (for example, an actuator).Negative feedback – the case where the fed-back information acts to control or regulate a system by opposing changes in the output or measurement. History[edit] Types[edit] Positive and negative feedback[edit] Biology[edit]

Anatta In Buddhism, the term anattā (Pāli) or anātman (Sanskrit: अनात्मन्) refers to the perception of "not-self", recommended as one of the seven beneficial perceptions,[1] which along with the perception of dukkha, and anicca, is also formally classified among the three marks of existence. Anatta in the Nikayas[edit] The ancient Indian word for self or essence is attā (Pāli) or ātman (Sanskrit), and is often thought to be an eternal substance that persists despite death. Hence the term anatta is often interpreted as referring to the denial of a self or essence. Taken together with the perceptions of anicca (impermanence) and dukkha (imperfection), anatta (not self) perception is the last of the three marks of existence, which when grasped strategically, leads to dispassion (nibbida). Karma and Anatta[edit] Skillful action[edit] Because most philosophers focus on asserting or rejecting a self,[3] when people approach Buddhism, they assume it is answering the same questions. Views on self[edit]

Object (philosophy) The pragmatist Charles S. Peirce defines the broad notion of an object as anything that we can think or talk about.[1] In a general sense it is any entity: the pyramids, Alpha Centauri, the number seven, a disbelief in predestination or the fear of cats. In a strict sense it refers to any definite being. A related notion is objecthood. Objecthood is the state of being an object. The notion of an object must address two problems: the change problem and the problem of substance. An attribute of an object is called a property if it can be experienced (e.g. its color, size, weight, smell, taste, and location). Because substances are only experienced through their properties a substance itself is never directly experienced. Some philosophies[which?] In the Mūlamadhyamakakārikā Nagarjuna seizes the dichotomy between objects as collections of properties or as separate from those properties to demonstrate that both assertions fall apart under analysis. Russell, Bertrand (1948).

Personal identity What does it take for individuals to persist from moment to moment—or in other words, for the same individual to exist at different moments? Generally, it is the unique numerical identity of persons through time.[3][4] That is to say, the necessary and sufficient conditions under which a person at one time and a person at another time can be said to be the same person, persisting through time.[note 5] In the modern philosophy of mind, this concept of personal identity is sometimes referred to as the diachronic problem[note 6] of personal identity.[5] The synchronic problem[note 7] is grounded in the question of what features or traits characterize a given person at one time. Identity is an issue for both continental philosophy and analytic philosophy. A question in continental philosophy is in what sense can the contemporary conception of identity be maintained, while many prior propositions, postulates, and presuppositions about the world are different.[6][7] Bodily substance[edit]

Eschatology Eschatology i/ˌɛskəˈtɒlədʒi/ is a part of theology concerned with the final events of history, or the ultimate destiny of humanity. This concept is commonly referred to as the "end of the world" or "end time". The word arises from the Greek ἔσχατος eschatos meaning "last" and -logy meaning "the study of", first used in English around 1550.[1] The Oxford English Dictionary defines eschatology as "The department of theological science concerned with ‘the four last things: death, judgment, heaven and hell’ In the context of mysticism, the phrase refers metaphorically to the end of ordinary reality and reunion with the Divine. History is often divided into "ages" (aeons), which are time periods each with certain commonalities. Most modern eschatology and apocalypticism, both religious and secular, involve the violent disruption or destruction of the world; whereas Christian and Jewish eschatologies view the end times as the consummation or perfection of God's creation of the world.

The Cult of the Amateur The book was based in part on a controversial essay Keen wrote for The Weekly Standard, criticizing Web 2.0 for being similar to Marxism, for destroying professionalism and for making it impossible to find high quality material amidst all of the user-generated web content.[1][2][3] Contents[edit] Keen argues against the idea of a read-write culture in media, stating that "most of the content being shared— no matter how many times it has been linked, cross-linked, annotated, and copied— was composed or written by someone from the sweat of their creative brow and the disciplined use of their talent." As such, he contrasts companies such as Time Warner and Disney that "create and produce movies, music, magazines, and television" with companies such as Google. He calls the latter "a parasite" since "it creates no content of its own" and "[i]n terms of value creation, there is nothing there apart from its links Mr. Reviews and reception[edit] Author Andrew Keen shown in Oxford in 2010