The Valley of the Shadow: Two Communities in the American Civil War 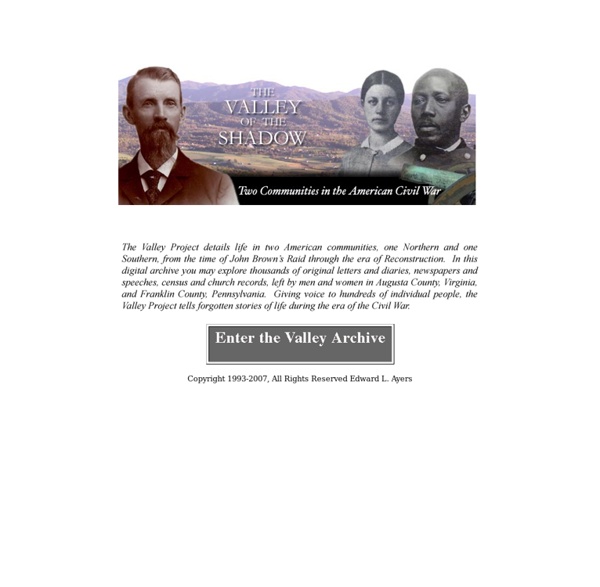 Antiwar and Radical History Project Aquatic "invasion" of Fort Lewis, July 13, 1969, copyright (c) Steve Ludwig Antiwar movements have never been separate from movements for civil rights, union recognition, and social change. In the Pacific Northwest, labor unions and socialists played a large part in the movement against World War I, while civil rights activism paved the way for the growth of the antiwar movement during the Vietnam era. Vietnam veterans and soldiers saw their antiwar struggle as part of a larger one involving black power, anti-racist, and student activism.

Primary Sources: Overview of Collections One of the nation’s top collections of rare law books is housed in the Paskus-Danziger Rare Book Room of the Lillian Goldman Library at the Yale Law School. The collection is particularly strong in Anglo-American common law materials, including case reports, digests, statutes, trials, treatises, and popular works on the law. Other strengths include Roman and canon law, international law (especially the works of Hugo Grotius and Samuel Pufendorf), and early law books from most European countries.

The World of 1898: The Spanish-American War "The war of the United States with Spain was very brief. Its results were many, startling, and of world-wide meaning." --Henry Cabot Lodge Hispanic Division, Library of Congress The University of Oklahoma College of Law: A Chronology of US Historical Documents Links marked with an asterisk (*) are to other websites and will open in a new window. Pre-Colonial To 1600 The Magna Carta (1215) Letter from Christopher Columbus to the King & Queen of Spain (1490's) The *Iroquois Constitution 17th Century 18th Century Why Instructional Design Must Focus on Learning Outcomes, Not Learning Activities It’s no secret that kids learn better when teachers provide learning activities that keep them engaged. Teachers work tirelessly to plan engaging lessons that capture and keep the interests of their students, thereby making content more accessible. However, teachers continue to feel the daunting pressure to compete for their students’ attention amidst the ever-evolving and rapidly-hanging mass media, social media, and entertainment industry, as these elements do a stellar job of keeping students highly engaged outside of the classroom. Although it is vitally important for us to know and understand our students' interests and the best conditions under which they learn, there is good news: It’s not necessary that we focus our efforts on competing with the devices and activities our students engage in during their downtime outside of the classroom! Recreation, entertainment, and downtime for students outside of the classroom are just that: recreation, entertainment, and downtime.

World War I Allied Propaganda Posters *Disclaimer: World War I Allied Propaganda Posters are dispalyed as historical documents of the era only and is not intended to promote or dissaprove any theories, views, notions, as well as any political, milirtary, social and any other types of actions for or against anybody and/or anything. Some portions of this webpage may contain extremely graphic images and/or text, which may offend sensitive viewers and are not recommended for viewing by persons under the age of 18. Viewer discretion is strongly advised. If you are unsure you wish to proceed, please leave this webpage now. Robaudi, Alcide Théophile. 1778-1783. America owes France the most unalterable gratitude : 1917- -- .