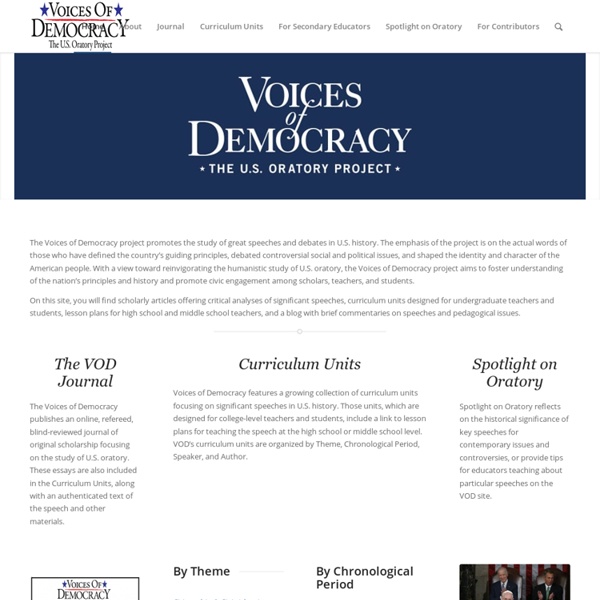 SoJust.net: Social Justice and Civil Rights Speeches Bella AbzugPlenary Address, Fourth World Congress on Women (1995) John AdamsInaugural Address (1797) Jane AddamsThe Subjective Necessity for Social Settlements (1892)The Modern Lear (1896) Susan B. AnthonyOn Women's Right to Vote (1872) PBS NewsHour Extra Extra News for Students and Teacher Resources 7–12 Grade Level Lesson Plans Religion and the Founding of the American Republic This exhibition demonstrates that many of the colonies that in 1776 became the United States of America were settled by men and women of deep religious convictions who in the seventeenth century crossed the Atlantic Ocean to practice their faith freely. That the religious intensity of the original settlers would diminish to some extent over time was perhaps to be expected, but new waves of eighteenth century immigrants brought their own religious fervor across the Atlantic and the nation's first major religious revival in the middle of the eighteenth century injected new vigor into American religion. The result was that a religious people rose in rebellion against Great Britain in 1776, and that most American statesmen, when they began to form new governments at the state and national levels, shared the convictions of most of their constituents that religion was, to quote Alexis de Tocqueville's observation, indispensable to the maintenance of republican institutions.

Open Professionals Education Network CC licensed (BY) Flickr photo shared by David Amsler modified by Paul Stacey Reusing existing Open Educational Resources (OER) can save significant time and effort. The OPEN partners recommend TAACCCT grantees invest up-front time finding OER to reuse rather than starting development of new educational resources right away. A significant benefit of OER is that they provide source material to build your development efforts around. No need to invest development effort in creating something that already exists. OER come in a wide variety of types. The African American Odyssey: A Quest for Full Citizenship The exhibition The African American Odyssey: A Quest for Full Citizenship, showcases the incomparable African American collections of the Library of Congress. Displaying more than 240 items, including books, government documents, manuscripts, maps, musical scores, plays, films, and recordings, this is the largest black history exhibit ever held at the Library, and the first exhibition of any kind to feature presentations in all three of the Library's buildings. The major presentation in the Jefferson Building, The African American Odyssey: A Quest for Full Citizenship, explored black America's quest for equality from the early national period through the twentieth century. The items in this exhibit attest to the drama and achievement of this remarkable story.

Intelligent YouTube Channels Below, we have gathered together some of the most intelligent video collections on YouTube. A great place to find culturally enriching video... General Universities Spotlighted Collections YouTube EDUYouTube got a lot more intelligent when it launched YouTube EDU, a section of the site that centralizes all of its educational/academic content. The Civil Rights Act of 1964: A Long Struggle for Freedom President Lyndon Johnson speaking to the nation from the White House prior to signing the Civil Rights Bill into law, while (left to right) Attorney General Robert F. Kennedy, Senate Minority Leader Everett M. Dirksen, Senator Hubert Humphrey, AFL/CIO President George Meany, Martin Luther King, Jr., and Representative Emanuel Celler listen, July 2, 1964.

The Voices of Democracy project is designed to promote the study of great speeches and public debates. The emphasis of the project on the actual words of those who, throughout American history, have defined the country's guiding principles. by nda_librarian May 5