History Matters: The U.S. Survey Course on the Web 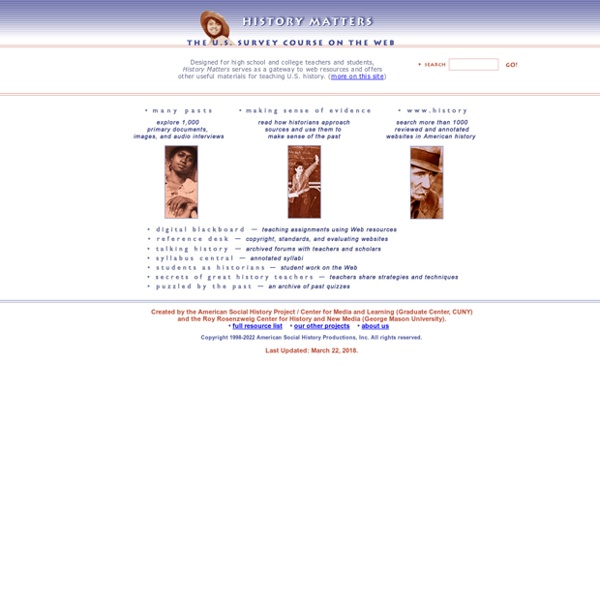 Related:  Data-driven history / DigHum • US History • US • Where to find information - US History

Mapping America's Changing Political Conversation Researchers used computational techniques to map recurring words and their relation to each other across 224-years of State of the Union remarks. Viewed as a network, the words point to common themes and disruptions in political discourse. (Courtesy of the authors) No historical record may capture the nation’s changing political consciousness better than the president’s State of the Union address, delivered each year except one since 1790.

The American Revolution and Its Era: Maps and Charts of North America and the West Indies, 1750-1789 The Library of Congress Map Collections | Military Battles and Campaigns Geography and Map Division, Library of Congress The World of 1898: The Spanish-American War "The war of the United States with Spain was very brief. Its results were many, startling, and of world-wide meaning." --Henry Cabot Lodge Hispanic Division, Library of Congress National Jukebox LOC.gov WARNING: Historical recordings may contain offensive language. Read the disclaimer Now Playing... Lesson plans for American history & literature teachers About AIC Lessons America in Class® Lessons are tailored to meet Common Core and state curriculum standards. The Lessons present challenging primary resources in a classroom-ready format, with background information and strategies that enable teachers and students to subject texts and images to analysis through close reading.

Exploring Big Historical Data: The Historian's Macroscope Welcome to the companion site for Exploring Big Historical Data: The Historian’s Macroscope, published by Imperial College Press. If you want to buy a copy, you can purchase one for $39.00 USD. Feel free to visit our original live-written fully open draft website, which is still online – and if you like what you see, you can always buy the book! On this site you will find code, essays (things we liked from the draft that did not fit), and datafiles that go with our book. The first draft’s interactive visualizations can be found here. •Diversity is vital to digital history, and our readers should consider it an essential additional chapter.

The War That Made America - French & Indian War Timeline French troops from Canada march south; seize and fortify the Ohio Valley. Britain protests the invasion and claims Ohio for itself. Ensign de Jumonville and a third of his escort is killed by a British patrol led by George Washington. In retaliation the French and the Indians defeat the British at Fort Necessity. Washington surrenders after losing one-third of his force. Antiwar and Radical History Project Aquatic "invasion" of Fort Lewis, July 13, 1969, copyright (c) Steve Ludwig Antiwar movements have never been separate from movements for civil rights, union recognition, and social change. In the Pacific Northwest, labor unions and socialists played a large part in the movement against World War I, while civil rights activism paved the way for the growth of the antiwar movement during the Vietnam era. Vietnam veterans and soldiers saw their antiwar struggle as part of a larger one involving black power, anti-racist, and student activism.

Coercive Acts - Teaching American History Boston Port Act (March 31, 1774) An act to discontinue, in such manner, and for such time as are therein mentioned, the landing and discharging, lading or shipping, of goods, wares, and merchandise, at the town, and within the harbour, of Boston, in the province of Massachuset’s Bay, in North America. II.

Designed for teachers of U.S. History around the world, History Matters provides an excellent starting point for exploring American history on the Web. This site serves as a gateway to Web resources and offers unique first person primary documents, and threaded discussions on teaching U.S. history. by nda_librarian Apr 30