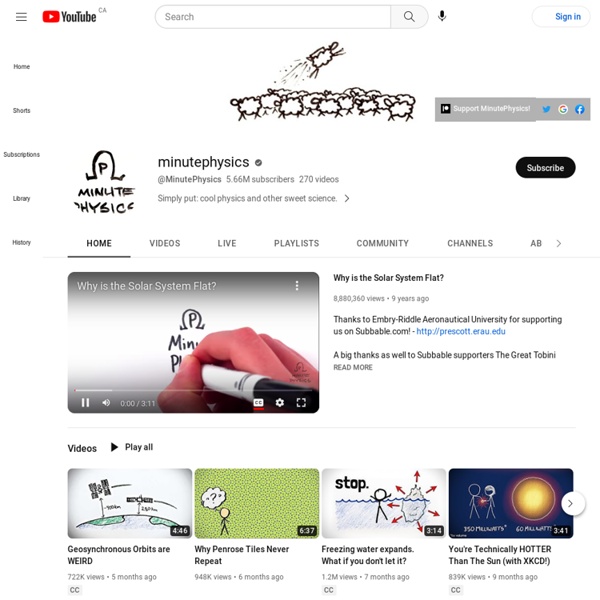 Common Science Myths That Most People Believe There are a number of old wives’ tales out there regarding some basic scientific principles. Though most of them were refuted years ago, these rumors just won’t go away. Here are some of the top myths floating around out there that just aren’t true: We only use 10% of our brains. NASA Johnson The "Space to Ground" web series, available every Friday, features a short wrap-up of the week's activities aboard the International Space Station that showcases the diversity of activities taking place aboard the world's only orbiting laboratory. If you have questions or comments, use #spacetoground to interact with us. You might just see them in one of our episodes!

PBS Space Time Have you ever asked “what is beyond the edge of the universe?” And have you ever been told that an infinite universe that has no edge? You were told wrong. In a sense. Physics Videos by Eugene Khutoryansky Upload Click for my personal website Subscription preferences Loading... Working... Big Think There are only two events in the universe that defy the laws of physics: black holes and the big bang, and while scientists try to explain them, crucial evidence may be eaten up in the meantime. Christophe Galfard's book is "The Universe in Your Hand A Journey Through Space, Time, and Beyond" ( Read more at BigThink.com: Follow Big Think here:YouTube:

Six Mysteries Solved By Science While there are some mysteries that scientists have not yet unraveled, there are some myths and legends that seem to persist even after an explanation has been provided. Bermuda Triangle The Bermuda Triangle is an area that represents the region of the Atlantic Ocean between Bermuda, Puerto Rico, and Miami, Florida. It became shrouded in mystery after World War II due to claims that ships and planes had gone missing under mysterious circumstances, without leaving a trace. Physics Simulations at The Physics Classroom Welcome to Physics Interactives! This section of our website features a collection of HTML5 interactive pages that allow a user to explore a physics concept. Some Interactives are simulations that allow a user to manipulate an environment and observe the effect of changes in variables upon the simulation. Other Interactives are skill building exercises in which a user practices a skill that is crucial to learning some aspect of physics.

Ramp: Forces and Motion - Force Topics Force Position Velocity Acceleration Description Science With Mrs Lau Teaching Resources I teach high school science and math. I have taught for 5 years in private and public school. I have taught and tutored all levels and all types of science! I served on my district's science curriculum committee and I am passionate about lesson creation. Smarter Every Day Twitter SmarterEveryDay Loading... Oldest Known Message-In-A-Bottle Found A postcard placed in a bottle and thrown into the North Sea more than a century ago has been found and returned to the scientific institution responsible for its distribution. Rather than a love letter or an SOS to the world, it is part of one of the longest running scientific experiments in the world. From 1904-1906 George Parker Bidder of the Marine Biological Association of the U.K. (MBA) placed 1020 postcards addressed to the institution in bottles and had them released into the North Sea.