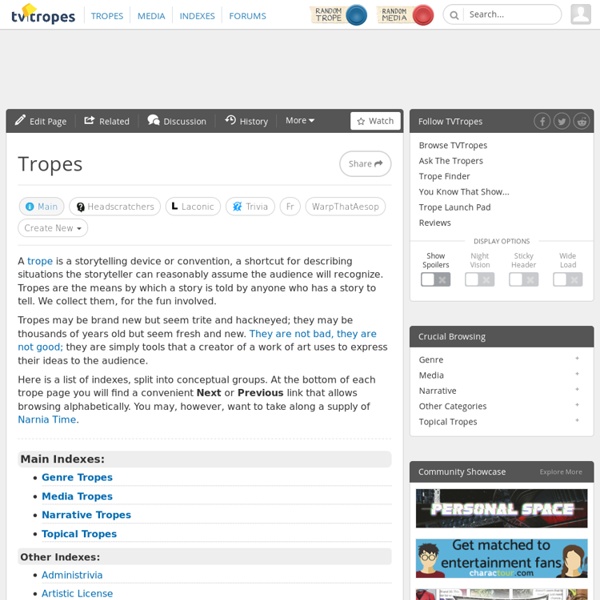 Default Narrative Sexism Following on from my recent thoughts on female characters in YA dystopias and the Broken Bird trope, something else about the treatment of women in stories has been niggling at me. Writing those both posts, my emotional reaction was consistently stronger and more negative than seemed explicable by their topics alone – as though there was something else under it, some deeper irk I couldn’t consciously describe, but which was nonetheless feeding into my reaction. Ever since then, I’ve been trying to figure out what it was; and now, finally, I think I’ve drawn a bead on it. So! Regardless of their political orientation, most people can admit that: Amazon launches Storyteller to turn scripts into storyboards — automagically NOTE: GrowthBeat -- VentureBeat's provocative new marketing-tech event -- is a week away! We've gathered the best and brightest to explore the data, apps, and science of successful marketing. Get the full scoop here, and grab your tickets while they last. Upload your script, choose some backgrounds, and magically create a professional-looking storyboard of your movie. Or the graphic novel version of your text-based anything. Amazon Studios released Storyteller today to allow writers and filmmakers to quickly, easily, and cheaply storyboard their scripts.

A Zen Master Responds to Hate Mail By Maria Popova Although the internet may have originated the notion of trolling as an act of aggression, the undergirding human impulse is an ancient one. Its pervasive manifestations drove Kierkegaard to ponder the psychological underpinnings of trolling and Benjamin Franklin to devise a brilliant strategy for handling haters. But because all acts of hate say more about the hater than about the hatee, this ugly primordial urge to transmute our inner pain into outward aggression often finds targets so unlikely as to border on the absurd — including, in one particularly colorful case, the great Korean-born Zen teacher Seung Sahn Soen-sa (August 1, 1927–November 30, 2004). In March of 1975, Soen-sa received a series of letters from a student, expressing a great deal of confusion about the “don’t-know mind” aspect of Zen practice, demanding various clarifications, and ending thusly: Please answer me soon, but you probably won’t, huh?

5 Ways to Get Rid of Your Damn Empty Modifiers I discussed the need to get rid of empty emphatics when I gave you 8 words to seek and destroy in your writing, but just saying that you should get rid of a thing doesn't say much about the right way to do so. Today I'm going to show you a few of my favorite ways to get rid of your empty modifiers. What exactly is an empty modifier? 6 Tips to Free Up Tons of Storage Space on iPad, iPhone, and iPod Touch Are you feeling the pinch of the limited storage capacity on an iPad, iPhone, or iPod touch? If you are running low on space, check out these tricks to greatly ease any potential storage squeeze you may be experiencing with your iOS gear. 1: Regularly Remove Photos & Video Mixed Signals: Why People Misunderstand Each Other In her new book No One Understands You and What To Do About It, Heidi Grant Halvorson tells readers a story about her friend, Tim. When Tim started a new job as a manager, one of his top priorities was communicating to his team that he valued each member’s input. So at team meetings, as each member spoke up about whatever project they were working on, Tim made sure he put on his “active-listening face” to signal that he cared about what each person was saying. But after meeting with him a few times, Tim’s team got a very different message from the one he intended to send.

Joss Whedon’s Top 10 Writing Tips Film critic Catherine Bray interviewed Joss Whedon in 2006 for UK movie magazine Hotdog to find out his top ten screenwriting tips. Catherine has kindly given us permission to reproduce the article here. Photo: Joss Whedon at San Diego Comic Con - courtesy of Gage Skidmore. Joss Whedon is most famous for creating Buffy the Vampire Slayer, its spin-off Angel and the short-lived but much-loved Firefly series. But the writer and director has also worked unseen as a script doctor on movies ranging from Speed to Toy Story. The 50 Best Podcasts of 2020 Gateway Episode: “William ‘Clyde’ Gibson” 20. The Chronicles of Now The writers of The Chronicles of Now satirize, applaud, and transmogrify the news of the day.

Articles on web writing - 4 Syllables Do you know how to make your social media posts accessible? In this article, we discuss ways to reduce accessibility barriers when writing posts, sharing links, and posting images and video. If you’re writing for the web, you’re writing for responsive design. Or you soon will be. In this article, we offer some tips to get your content working well on a range of screen sizes and orientations. Long descriptions are text alternatives for complex or detailed images.

I am your editor I have been in publishing for over ten years, mostly as an editor. I am the person who accepts or rejects your manuscript. Here is how I make my decisions. I look at the envelopes I am opening as I work my way down the slush pile. The 50 Best Podcasts of 2020 - The Atlantic Gateway Episode: “William ‘Clyde’ Gibson” 20. The Chronicles of Now The writers of The Chronicles of Now satirize, applaud, and transmogrify the news of the day. The podcast, hosted by Ashley Ford, commissions famous authors (such as Roxane Gay, Ben Fountain, and Manuel Gonzales) to create short fiction pulled from the headlines.