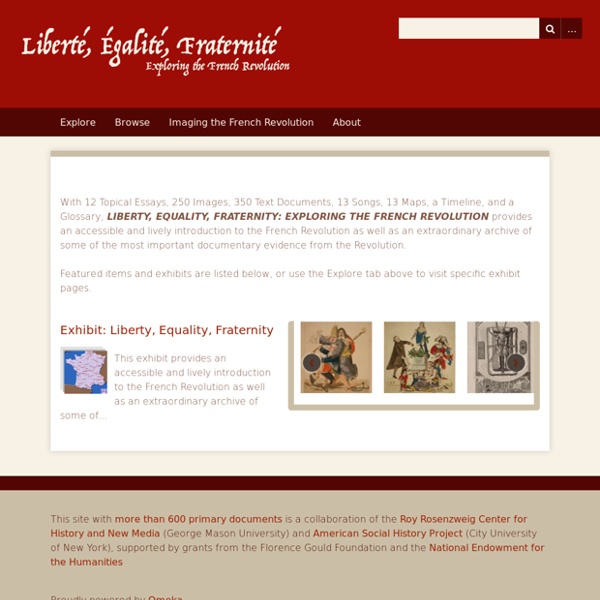 Liberty, Equality, Fraternity: Exploring the French Revolution, With 12 Topical Essays, 250 Images, 350 Text Documents, 13 Songs, 13 Maps, a Timeline, and a Glossary. Explore Browse Search About This Site Teaching Credits New: Imaging the French Revolution This site with more than 600 primary documents is a collaboration of the Roy Rosenzweig Center for History and New Media (George Mason University) and American Social History Project (City University of New York), supported by grants from the Florence Gould Foundation and the National Endowment for the Humanities

his101cd HIS 102 – Western Civilization IILecture 4 -- The Peasants are Revolting(The French Revolution and Napoleon) (Declaration of the Rights of Man and Citizen) I. The French Revolution Victor Hugo Victor Marie Hugo (French pronunciation: ​[viktɔʁ maʁi yɡo]; 26 February 1802 – 22 May 1885) was a French poet, novelist, and dramatist of the Romantic movement. He is considered one of the greatest and best known French writers. In France, Hugo's literary fame comes first from his poetry but also rests upon his novels and his dramatic achievements. Lecture 13: The French Revolution, The Radical Stage, 1792-1794 The proof necessary to convict the enemies of the people is every kind of evidence, either material or moral or verbal or written. . . . Every citizen has the right to seize conspirators and counter-revolutionaries and to arraign them before magistrates. He is required to denounce them when he knows of them. Law of 22 Prairial Year II (June 10, 1794) Inflamed by their poverty and hatred of wealth, the SANS-CULOTTES insisted that it was the duty of the government to guarantee them the right to existence. Such a policy ran counter to the bourgeois aspirations of the National Assembly.

Romanticism Defining Romanticism[edit] Basic characteristics[edit] Defining the nature of Romanticism may be approached from the starting point of the primary importance of the free expression of the feelings of the artist. Lecture 12: The French Revolution - Moderate Stage, 1789-1792 Beloved and loyal supporters, we require the assistance of our faithful subjects to overcome the difficulties in which we find ourselves concerning the current state of our finances, and to establish, as we so wish, a constant and invariable order in all branches of government that concern the happiness of our subjects and the prosperity of the realm. These great motives have induced us to summon the Assembly of the Estates of all Provinces obedient to us, as much to counsel and assist us in all things placed before it, as to inform us of the wishes an grievances of our people; so that, by means of the mutual confidence and reciprocal love between the sovereign and his subjects, an effective remedy may be brought as quickly as possible to the ills of the State, and abuses of all sorts may be averted and corrected by good and solid means which insure public happiness and restore to us in particular the calm and tranquility of which we have so long been deprived. | Table of Contents |

Les Misérables - Victor Hugo - Book Clubs The book which the reader now holds in his hands, from one end to the other...treats the advance from evil to good, from injustice to justice, from falsity to truth, from darkness to daylight, from blind appetite to conscience, from decay to life, from bestiality to duty, from Heaven to Hell, from Limbo to God. Matter itself is the starting point, and the point of arrival is the soul. —Victor Hugo, Les Misérables Twenty years in the conception and execution, Les Misérables was first published in France and Belgium in 1862, a year which found Victor Hugo in exile from his beloved France. Enemies and admirers throughout the world devoured his works—poetry, political tracts, and fiction—and the effect of these works upon the public was always sensational. On the morning of 15 May, a mob filled the streets around Pagnerre's book shop, eyeing the stacks of copies of Les Misérables that stretched between floor and ceiling.

Flashcards about French Revolution incorrect cards (0) correct cards (0) remaining cards (19) Save retry fix View topic - Les Misérables as a Romantic Novel Hugo was doing what he can with that version of nationalism with Notre-Dame - a depressing soap-opera of a novel written in order to engage people in the reclamation of their cultural past. In Scotland, you have Ossian, in France, Notre-Dame and a whole load of troubadour poetry getting published in the 1820s. From a nationalism theory perspective, France was still early in the process of nation-building. Only with the Revolutionary and Napoleonic Wars did you get enough people from various regions together and have to enforce a single language on a wide scale.

Untitled Document Hugo associated with the Romantic Movement while it was still in its early infancy, and remained faithful to the Romantic cause all throughout his career, a career that spanned over three generation. He broke from the conventional 18th-century rules of French versification; and in the preface to his drama Cromwell (1827; translated 1896), a famous critical document in its own right, Hugo not only defended his break from traditional dramatic structure but also justified the introduction of the grotesque into art. Romanticism praised the genius of the extraordinary man. Les Misérables Les Misérables (pronounced /leɪ ˌmɪzəˈrɑːb/; French pronunciation: ​[le mizeʁabl(ə)]) is a French historical novel by Victor Hugo, first published in 1862, that is considered one of the greatest novels of the 19th century. In the English-speaking world, the novel is usually referred to by its original French title, which has not been successfully translated from French (attempts ranging from The Miserable, The Wretched, The Miserable Ones, The Poor Ones, The Wretched Poor and The Victims, to The Dispossessed).[1] Beginning in 1815 and culminating in the 1832 June Rebellion in Paris, the novel follows the lives and interactions of several characters, focusing on the struggles of ex-convict Jean Valjean and his experience of redemption.[2] The appearance of the novel was highly anticipated and advertised. Critical reactions were diverse, but most of them were negative. Commercially, the work was a great success globally.

June Rebellion The June Rebellion, or the Paris Uprising of 1832 (French: Insurrection républicaine à Paris en juin 1832), was an unsuccessful, anti-monarchist insurrection of Parisian republicans from June 5 to June 6, 1832. The rebellion originated in an attempt of the republicans to reverse the establishment in 1830 of the July Monarchy of Louis-Philippe, shortly after the death of the king's powerful supporter, President of the Council, Casimir Pierre Périer, on May 16, 1832. The rebellion was the last outbreak of violence linked with the July Revolution. Author Victor Hugo described the rebellion in his novel Les Misérables, and it also figures largely in the stage musical and films based on the book. Background[edit]

This is a resource to explore more about the French Revolution in more depth, looking deeper at causes and effect, as well as more detail into some of the major events. Great source for documents and resources as well. by srose98 Apr 7

Provides an accessible and lively introduction of the French Revolution as well as an extraordinary archive of some of the most important documentary evidence from the Revolution. by nda_librarian Apr 30