What Happened to Downtime? The Extinction of Deep Thinking & Sacred Space 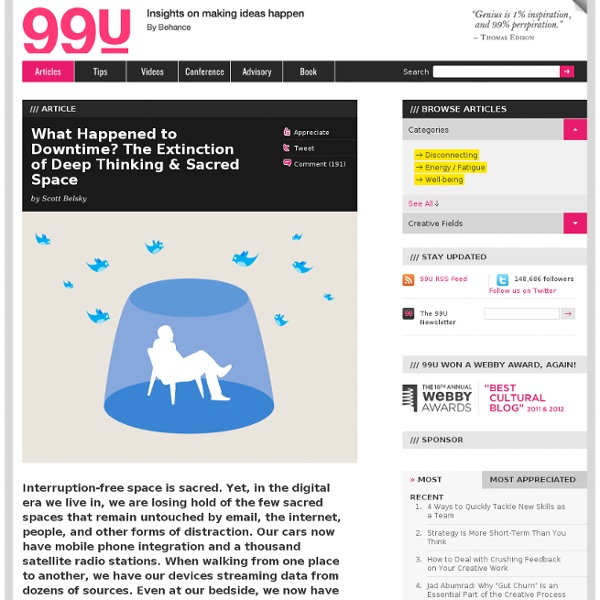 Interruption-free space is sacred. Yet, in the digital era we live in, we are losing hold of the few sacred spaces that remain untouched by email, the internet, people, and other forms of distraction. Our cars now have mobile phone integration and a thousand satellite radio stations. When walking from one place to another, we have our devices streaming data from dozens of sources. Even at our bedside, we now have our iPads with heaps of digital apps and the world’s information at our fingertips. There has been much discussion about the value of the “creative pause” – a state described as “the shift from being fully engaged in a creative activity to being passively engaged, or the shift to being disengaged altogether.” However, despite the incredible power and potential of sacred spaces, they are quickly becoming extinct. Why do we crave distraction over downtime? Why do we give up our sacred space so easily? We are depriving ourselves of every opportunity for disconnection. 1. 2. 3. 4.

Can We Download Our Brains? With rendition switcher Question: Will it be possible to transfer one’s memory into a synthetic medium in our lifetime? (Submitted by Tomas Aftalion) Michio Kaku: Tomas, you ask a very controversial question. Philosophical Transactions B - Time Although time is part of our experience, it is nowhere to be found in the physical world. There exists no sense organ for time, yet we perceive its passage and can judge duration. Because our experience of time is intangible, it seems that this topic of research is so complex that, surprisingly enough, there is still no consensus on how and where in the brain time is processed.

Roadmaps For Worship Humans exist in time. We measure time. We give time. We mark time. We spend time. Zenhabits ‘Smile, breathe and go slowly.’ ~Thich Nhat Hanh By Leo Babauta Jacob Barnett,12, with higher IQ than Einstein develops his own theory of relativity By Daily Mail Reporter Created: 16:03 GMT, 24 March 2011 A 12-year-old child prodigy has astounded university professors after grappling with some of the most advanced concepts in mathematics. Jacob Barnett has an IQ of 170 - higher than Albert Einstein - and is now so far advanced in his Indiana university studies that professors are lining him up for a PHD research role. The boy wonder, who taught himself calculus, algebra, geometry and trigonometry in a week, is now tutoring fellow college classmates after hours. Scroll down for video Gifted: Jacob Barnett is so far ahead of his age group he is now leaving university he is developing his own theory on how the universe came into being

Julius Thomas Fraser J. T. Fraser (May 7, 1923 in Budapest, Hungary – November 21, 2010 in Westport, Connecticut) made important scholarly contributions to the interdisciplinary Study of Time and was a founding member of the International Society for the Study of Time.[1][2] His work has strongly influenced thinking about the nature of time across the disciplines from physics to sociology, biology to comparative religion, and he was a seminal figure in the general interdisciplinary study of temporality.[3] His work has been particularly influential on the work of Frederick Turner and Alexander Argyros. Biography[edit] Born and raised in Hungary, Fraser was not drafted into the military on account of his partial Jewish heritage.

» 12 Essential Rules to Live More Like a Zen Monk “We have more possibilities available in each moment than we realize.” - Thich Nhat Hanh By Leo Babauta I’m not a Zen monk, nor will I ever become one. However, I find great inspiration in the way they try to live their lives: the simplicity of their lives, the concentration and mindfulness of every activity, the calm and peace they find in their days. You probably don’t want to become a Zen monk either, but you can live your life in a more Zen-like manner by following a few simple rules.