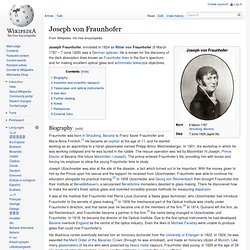 He is known for the discovery of the dark absorption lines known as Fraunhofer lines in the Sun's spectrum, and for making excellent optical glass and achromatic telescope objectives. Biography[edit] Fraunhofer was born in Straubing, Bavaria to Franz Xaver Fraunhofer and Maria Anna Frohlich.[1] He became an orphan at the age of 11, and he started working as an apprentice to a harsh glassmaker named Philipp Anton Weichelsberger.

In 1801, the workshop in which he was working collapsed and he was buried in the rubble. The rescue operation was led by Maximilian IV Joseph, Prince Elector of Bavaria (the future Maximilian I Joseph). His illustrious career eventually earned him an honorary doctorate from the University of Erlangen in 1822. Invention and scientific research[edit] Fraunhofer demonstrating the spectroscope. Thus in 1814, Fraunhofer invented the spectroscope. Mary Somerville. Mary Fairfax Somerville (26 December 1780 – 28 November 1872) was a Scottish science writer and polymath, at a time when women's participation in science was discouraged. 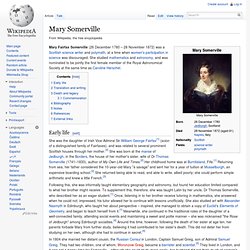 She studied mathematics and astronomy, and was nominated to be jointly the first female member of the Royal Astronomical Society at the same time as Caroline Herschel. Early life[edit] Following this, she was informally taught elementary geography and astronomy, but found her education limited compared to what her brother might receive. Anders Celsius. Anders Celsius (27 November 1701 – 25 April 1744) was a Swedish astronomer, physicist and mathematician. 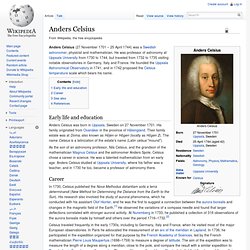 Ruđer Bošković. Roger Joseph Boscovich (Croatian: Ruđer Josip Bošković (pronounced [rûd͡ʑɛr jɔ̌sip bɔ̂ʃkɔʋit͡ɕ]) (see also names in other languages); 18 May 1711 – 13 February 1787) was a physicist, astronomer, mathematician, philosopher, diplomat, poet, theologian, Jesuit priest, and a polymath[1] from the city of Dubrovnik in the Republic of Ragusa (today Croatia), who studied and lived in Italy and France where he also published many of his works.[2] He produced a precursor of atomic theory and made many contributions to astronomy, including the first geometric procedure for determining the equator of a rotating planet from three observations of a surface feature and for computing the orbit of a planet from three observations of its position. 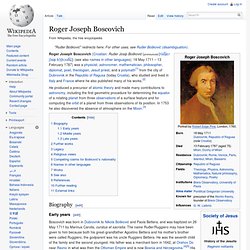 In 1753 he also discovered the absence of atmosphere on the Moon.[3] Alexis Clairaut. Alexis Claude Clairaut (13 May 1713 – 17 May 1765) was a prominent French mathematician, astronomer, geophysicist, and intellectual. 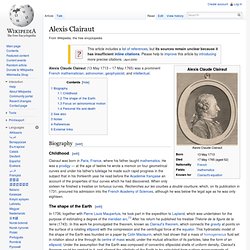 Biography[edit] Childhood[edit] Clairaut was born in Paris, France, where his father taught mathematics. He was a prodigy — at the age of twelve he wrote a memoir on four geometrical curves and under his father's tutelage he made such rapid progress in the subject that in his thirteenth year he read before the Académie française an account of the properties of four curves which he had discovered. When only sixteen he finished a treatise on tortuous curves, Recherches sur les courbes a double courbure, which, on its publication in 1731, procured his admission into the French Academy of Sciences, although he was below the legal age as he was only eighteen. The shape of the Earth[edit] Focus on astronomical motion[edit] The Théorie de la lune is strictly Newtonian in character. 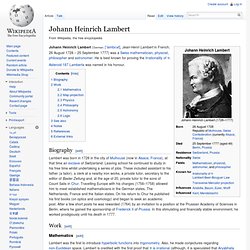 He is best known for proving the Irrationality of π. William Herschel. Early life and musical activities[edit] Herschel was born in the Electorate of Hanover, part of the Holy Roman Empire, one of ten children of Isaac Herschel by his marriage to Anna Ilse Moritzen. 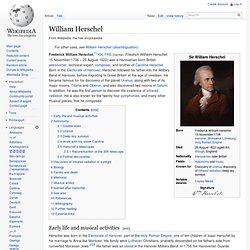 His family were Lutheran Christians, probably descended on his father's side from converted Moravian Jews.[2][3] His father was an oboist in the Hanover Military Band. In 1755 the Hanoverian Guards regiment, in whose band Wilhelm and his brother Jakob were engaged as oboists, was ordered to England. At the time the crowns of Great Britain and Hanover were united under King George II. As the threat of war with France loomed, the Hanoverian Guards were recalled from England to defend Hanover. Original manuscript of Symphony No. 15 in E flat major (1762). Herschel moved to Sunderland in 1761 when Charles Avison immediately engaged him as first violin and soloist for his Newcastle orchestra, where he played for one season. 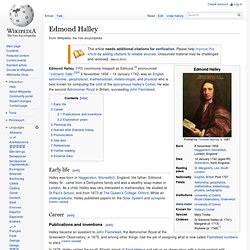 Giuseppe Piazzi. Early Life[edit] No documented account of Piazzi's scientific education is available in any of the biographies of the astronomer, even in the oldest ones. 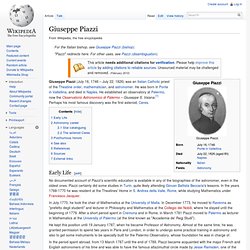 Piazzi certainly did some studies in Turin, quite likely attending Giovan Battista Beccaria's lessons. In the years 1768-1770 he was resident at the Theatines' Home in S. Andrea della Valle, Rome, while studying Mathematics under Francesco Jacquier. Pierre-Simon Laplace. Pierre-Simon, marquis de Laplace (/ləˈplɑːs/; French: [pjɛʁ simɔ̃ laplas]; 23 March 1749 – 5 March 1827) was a French mathematician and astronomer whose work was pivotal to the development of mathematical astronomy and statistics. 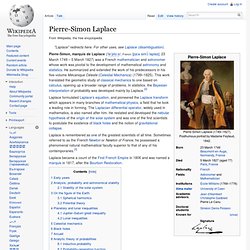 He summarized and extended the work of his predecessors in his five-volume Mécanique Céleste (Celestial Mechanics) (1799–1825). This work translated the geometric study of classical mechanics to one based on calculus, opening up a broader range of problems.