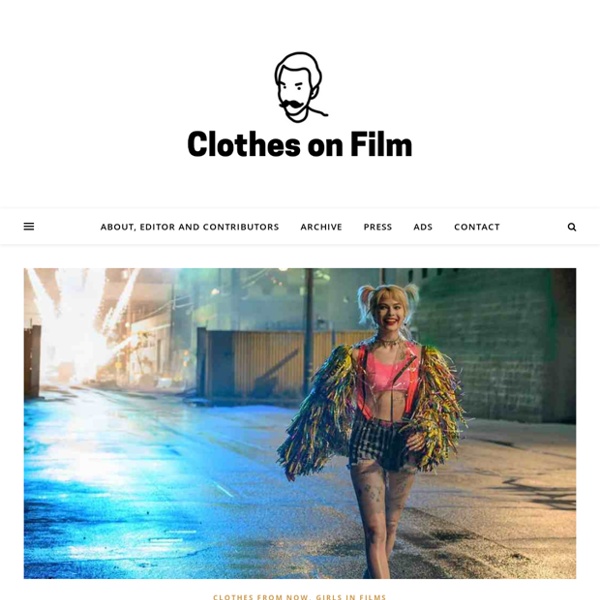 © 2014 Lord Christopher Laverty. All rights reserved. Two weeks of juicy costume links. Sandy Powell A costumer who needs no introduction. This Sunday at the J. Paul Getty Museum she discusses the use of period photographs in her process.

Temple of the Seven Golden Camels: Thinking, Processing, and Reacting I often talk about how creating distinct and interesting characters with unique personalities is one of the most important parts of our trade. I'm warning you now, this is another one of those posts! Raymond Chandler was a writer of detective novels and the creator of the iconic hard boiled detective Philip Marlowe. Towards the end of his career, he sat down for an interview with Ian Fleming, the writer of the James Bond novels. If you Google something like "Raymond Chandler Ian Fleming interviews", you'll be able to find transcriptions and youtube excerpts so you can read it, or listen to it, or both. Nate Wragg Art and Illustration: Character Design for Production With my online character design classes starting this weekend, I wanted to put a little more info out there about them. One of the classes I offer is Character Design for Production. This class is an 8 week course that takes you from beginning to end on the professional production of a character design. Whether you prefer designing in a more graphic and 2-D style, or are looking to develop a design with more of a 3-D sensibility, this class covers it all. We focus on the fundamental building blocks of designing characters for production, which is how to make your designs be functional characters for animation.

The Ram : Egypt From the Eyes of Egyptians Egypt used to only be known for its pyramids. Now, it carries a record of major social upheaval and general unrest. Protests and violence are still present throughout the streets of Egypt. Ever since the June 30th protests, things have never settled down. From young children to college students to mothers, everyone in Egypt has been affected in some way. The Costumer's Guide to Movie Costumes Archived News - May 2009 Thanks to Berg for pointing out that this website carries various movie costume-related jumpsuits, including Lost. Thanks to Mona for writing in about some Zeffirelli Romeo and Juliet costumes (designed by Danilo Donati) which are on display right now in NYC. 10 Advanced Acting Performance Tips for Animators We have a very SPECIAL blog post from our veteran mentor and acting extraodinaire, Dana Boadway-Masson. She walks you through her secrets on acting and performance tips that helps you create believable, living and breathing characters. A must read for any animator that needs to take it to the next level. Learn, absorb it, and go animate that shot! - The Animation Mentor Crew Beyond the 12 Principles: Dana’s Top Ten (in no particular order!)

JohnKCurriculum: Character Design Character Design 1: The Character Design Fallacy Character Design 2: Primer Character Design 3: Layout Artist With Versatility, Conservatism, Style and Control 8 Chic Sex Toys - Best Luxury Sex Toys 8 Sex Toys for the Chic Woman o r Shop the Story See More Photos Prince broke all the rules of fashion, and damn did he look good Was there ever a male performer more enamored with ruffles — or lace or velvet — than Prince? He wore it all beautifully, seductively and powerfully. With his frilly shirts and velvet suits, his brocades and silks, Prince played with gender stereotypes and moved us to to reconsider our relationship to our own sexuality. He used fashion as an aphrodisiac. It was foreplay and after glow — and the divinely sweaty middle. Prince in 1985 in ruffles and a boa.

Catalogue of Curiosities This post comes via Mark Christiansen’s blog as well as Yowp (both blogs are inexhaustible resources of 50s-60s era Hanna-Barbera). Apparently a mysterious stranger has recently posted black and white Hanna-Barbera show bumpers on You Tube. With layouts and animation by studio stalwarts like Ed Benedict, Art Lozzi and Ed Love, these bumpers are quick, funny scenarios, highlighting various characters in the Hanna-Barbera stable and packed full of great gags and wonderful compositions. Another highlight of these bumpers: the voice acting of Daws Butler, as everyone from Snagglepuss to Huckleberry Hound and Rojay North as the voice of Mr. Jinks*. Hilarity does indeed ensue.

Art and Reference point The other day I came across this awesome program by accident (I don’t even remember what I was actually searching for, but on the several times I’ve looked for a program like this I’ve had no luck). It’s cool enough that I wanted to share it. It’s called DesignDoll (website here) and it’s a program that lets you shape and pose a human figure pretty much however you want.There’s a trial version with no expiration date that can be downloaded for free, as well as the “pro license” version priced at $79. I’ve only had the free version for two days so far, so I’m not an expert and I haven’t figured out all of the features yet, but I’ve got the basics down.

Dr. Dennis Gross Skincare™ Product Detail: Alpha Beta® Daily Face Peel-Original Formula 45 Applications. 2 jars (Step 1 & Step 2) containing 45 pads each. What Is It? A two-step anti-aging facial peel that reduces fine lines and wrinkles, enlarged pores, fights blemishes and helps with dark spots and redness. Dr. Gross' research shows this #1 selling at-home facial peel delivers instant and lasting benefits, including a smoother, brighter, more youthful and clearer complexion. Alpha Beta® Daily Face Peel is the only peel on the market to combine 5 Alpha and Beta Hydroxy Acids PLUS Retinol, Ubiquinone, Resveratrol and a host of antioxidants, vitamins and soothing botanicals. The Bedazzling of the American Gymnast Though television brings all the athletes up close, they can get lost amid the actual competition on the floor, and shine helps highlight and distinguish each girl. “When the judges are there, every little thing counts,” said Samantha Peszek, a member of the 2008 Olympic team who is working for NBC’s digital and social content team for this summer’s games. The crystals also serve to emphasize the aesthetic aspect of a sport that has become ever more focused on athleticism and tricks — to its detriment, some argue. In a way, the fanciness and drama of the leotards can be seen as an attempt to correct a perceived imbalance between artistic power and physical power: telegraphing the idea that while “our skill level says one thing, our dress style says another.” The Olympic stadium “is the biggest stage of our lives,” Ms. Liukin, the 2008 Olympic gymnast and current NBC Olympic commentator, said.