10 Days of Character Building: Wrap Up 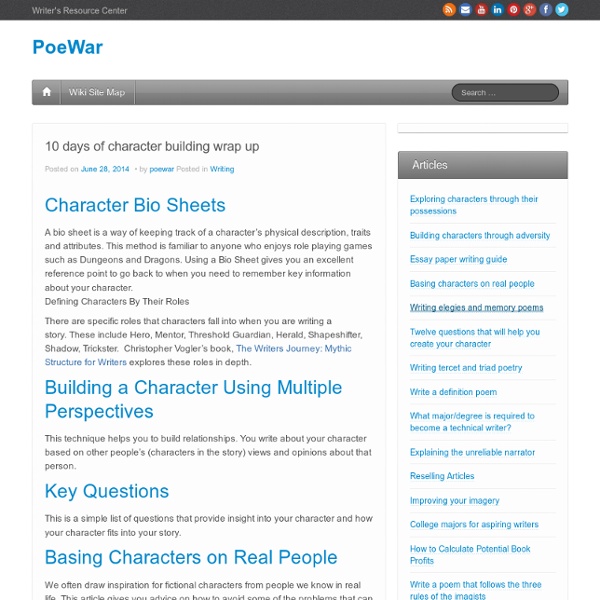 Character Bio Sheets A bio sheet is a way of keeping track of a character’s physical description, traits and attributes. This method is familiar to anyone who enjoys role playing games such as Dungeons and Dragons. Using a Bio Sheet gives you an excellent reference point to go back to when you need to remember key information about your character. Defining Characters By Their Roles There are specific roles that characters fall into when you are writing a story. Building a Character Using Multiple Perspectives This technique helps you to build relationships. Key Questions This is a simple list of questions that provide insight into your character and how your character fits into your story. Basing Characters on Real People We often draw inspiration for fictional characters from people we know in real life. A Day in the Life Once the events of a story kick into motion, main characters are pushed outside of their boundaries and comfort zones. Interview Biography Possessions Brainstorming

Advanced Marketing Institute - Headline Analyzer Enter Your Headline Text Paste your headline in the text area below. The analysis engine will automatically cut your submission at 20 words, so we encourage you to do a word count before submitting! This will ensure the most accurate analysis. What is the Headline Analyzer? This free tool will analyze your headline to determine the Emotional Marketing Value (EMV) score. Your headline will be analyzed and scored based on the total number of EMV words it has in relation to the total number of words it contains. In addition to the EMV score, You will find out which emotion inside your customer's your headline most impacts: Click here for a Q&A on the AMI Emotional Marketing Value (EMV) system>

Here to Create & 102 Resources for Fiction Writing UPDATE 1/10: Dead links removed, new links added, as well as Revision and Tools and Software sections. Are you still stuck for ideas for National Novel Writing Month? Or are you working on a novel at a more leisurely pace? Here are 102 resources on Character, Point of View, Dialogue, Plot, Conflict, Structure, Outlining, Setting, and World Building, plus some links to generate Ideas and Inspiration. Also, I recommend some resources for Revision and some online Tools and Software. Too many links? 10 Days of Character Building Name Generators Name Playground The Universal Mary Sue Litmus Test Priming the idea pump (A character checklist shamlessly lifted from acting) How to Create a Character Seven Common Character Types Handling a Cast of Thousands – Part I: Getting to Know Your Characters It’s Not What They Say . . . Establishing the Right Point of View: How to Avoid “Stepping Out of Character” How to Start Writing in the Third Person Web Resources for Developing Characters Speaking of Dialogue

MyFreeCopyright.com: FREE Copyright Protection Web Resources for Developing Characters When developing characters, many writers use personality traits that they see in themselves and in others, such as friends, family and celebrities. A new source of material and information that can help you develop characters is the Internet. The Internet offers some unique resources for character development, such as psychological testing websites, baby name databases and other reference sites and databases. These websites certainly weren't created for writers developing characters; nevertheless, these site are extremely useful for writers. This article will help you locate some of these useful resources, and give you some tips about how you can use them to develop your own characters. Psychological Resources Psychological websites can help writers learn the underlying principles of behavior that motivate or cause people to act as they do. Biography Resources Biography resources can be a great help to writers. Naming Characters Other Resources Developing Characters

How to Write an Amazing Article Writing and design have always been two passions of mine. When someone first approached me with a writing opportunity for their blog, I was shocked. It hadn’t crossed my mind for a moment that the two could be brought together harmoniously. I still remember writing that article and building my first brainstorm of topics. I found myself asking, "What makes a good article?" But, to hell with good articles. I’m always trying to take things to the next level, so I asked, "What makes an amazing article?" Content is King That’s right. Users will check out a site once and bask in its beauty, but the content is what will make them come back. Know your readers It’s very helpful to pick a subject for your writing. Original content It can be frustrating to come up with a topic, only to search it in Google and find a similar article already written. But this is our job as writers – we need to find topics that our readers will be interested in, and write about them in a creative way. Style and Flow