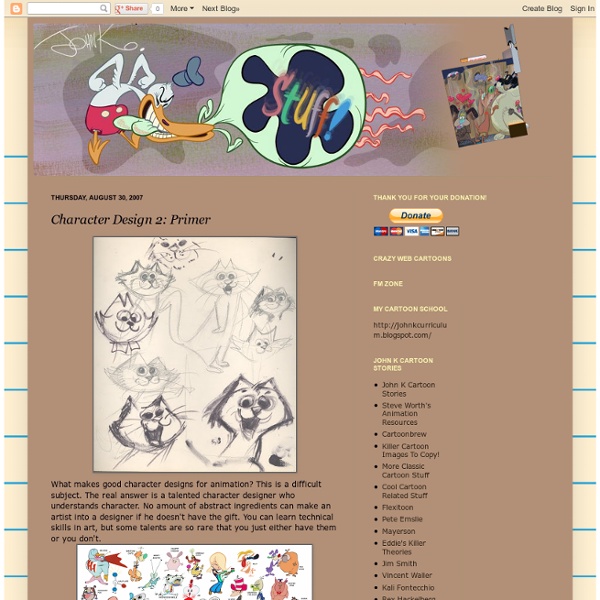 What makes good character designs for animation? This is a difficult subject. The real answer is a talented character designer who understands character. Not every great animator is a good designer. If, however you do have the rare gift of design, and you are an animator who understands character then you might be aided in having a discussion started. Design itself - in any medium requires purely an aesthetic sense of balance of pleasing shapes or forms. An architect doesn't set out to make a building that has a distinct funny personality. 1 Functional Form - construction:An animated cartoon character benefits the animator greatly if it has an understandable, mostly logical form. This giant is not really a design. We have to be able to move the forms around in space and if the forms don't work from different angles, are sloppily constructed, the animation is wobbly and unstable - unless we use cheats to get from one disconnected mess of details to the next. Simplicity Can Be Moved Easily Related:  CHARACTER AND CONCEPT DESIGN

Flat = Funny and Depth = Dramatic One of the most basic and perplexing challenges a board artist faces is how to get the desired emotional response from the audience. Many times people will board a dramatic and serious scene, only to find that when they pitch it to a room full of fellow board artists, the audience doesn't take it as it was intended and breaks into laughs instead. Or vice versa...a board artist will pitch a scene that's meant to be funny and the room will be totally quiet, with no laughter happening at all. A big part of what makes us feel like we should laugh at a scene or take it seriously is the visual cues that are used within the sequence. These are examples from two comedies: "Little Miss Sunshine" and "Nacho Libre". Bright colors are a good visual cue to tell us that a scene is supposed to be funny. By contrast, here are some dramatic scenes from "3:10 to Yuma" (the modern remake), "Touch of Evil" and "The Verdict". These are markedly different from the comedic examples. This makes sense.

Art and Reference point - Further Art reference Tumblr Blogs 5 Fundamental Skills Every Artist Should Master As an artist, your job is to immerse your viewers into a world that you have built and guide them safely through it. Artists have much in common with storytellers. Storytellers have several tricks that they use to keep their readers coming back for more. The most important aspect of art to me personally is the composition. This is the simplest and most used composition technique, one that I use a lot myself. The main idea behind this is to place your most important element/object on one of the intersections where the lines converge (the +'s), as well as along or near the vertical line of wherever your focal may lie. It is believed that when this is used and your subject/focal sits on one of these spots, it creates more interest in your picture rather than having it centered. In contrast to what was stated above, this particular composition sets the focal point directly in the center of the picture. Everything has a perspective. So, what do I mean by them being able to read properly?

• This is part of a lecture I gave for the... Ten Things to Think About - #9 Eyes ~ Thinking Animation Blog 10 Things to Think About - from the book Thinking Animation by Angie Jones and Jamie Oliff. This is one of the lectures I use at the online school ianimate.net. I created this list for my book Thinking Animation to help animators create a clear and solid message with their work. I will post the 10 Things to Think About over the course of the next 10 weeks. ~Enjoy! #9 Eyes: (This particular lecture is much longer when I teach. Basic Notes on animating Eyes: Eyes are windows into the soul and the soul is controlled by the mind.Eye darts and glances tell more than any other gestures in the body when used in the right place in the scene. Overview of Eye Movement: Never animate without a reason! ...eye shape: when the iris moves around the eye the lid cuts across it changing its shape from round to oval. ...lid shape: The lid itself changes shape as the eye line changes and the brow pushes down on it with emotional poses. ...blinks: Never blink unless there is a reason! Eye Darts: Squinting:

Character Costume Tips on Character and Costume Design by Aaron Diaz Character design is paramount to pretty much any kind of comic. Most comics have things in them, and some of those things are characters, and those characters better be well-designed. Design allows the artist to communicate essential information to the reader about a character, and a good design allows for versatility independent of minor details. I’ll probably write a more specific post later about the mechanics of character design, but for now I’m just compiling a list of my personal favorite comic character designs. All of the one I list exhibit all of the key essential design elements:Silhouette - the outer shape is clear and uniqueValue - the lights and darks provide effective contrastColor - meaningful and compelling color choicesVersatility - details of the design are flexibleIconic - striking, memorable imagery Here are my favorite designs from the world of comics: #10 - Spider Jerusalem #9 - Thor #8 - Calvin & Hobbes #7 - The One Electronic #6 - The Elric Brothers #5 - Popeye Shape

Character Design Ed Benedict | Catalogue of Curiosities This post comes via Mark Christiansen’s blog as well as Yowp (both blogs are inexhaustible resources of 50s-60s era Hanna-Barbera). Apparently a mysterious stranger has recently posted black and white Hanna-Barbera show bumpers on You Tube. With layouts and animation by studio stalwarts like Ed Benedict, Art Lozzi and Ed Love, these bumpers are quick, funny scenarios, highlighting various characters in the Hanna-Barbera stable and packed full of great gags and wonderful compositions. Another highlight of these bumpers: the voice acting of Daws Butler, as everyone from Snagglepuss to Huckleberry Hound and Rojay North as the voice of Mr. *UPDATE! As a sidenote, I recently ran across the following model sheets that artist Bill Wray had posted, all of which were drawn by the incomparable Ed Benedict. Read Full Post » Read Full Post » Ed Benedict’s character designs are simply wonderful. Much of his work laid the foundation for the look of many Hanna Barbera’s most famous characters. Tom Oreb