How to Develop a Character for a Story (with Character Descriptions) 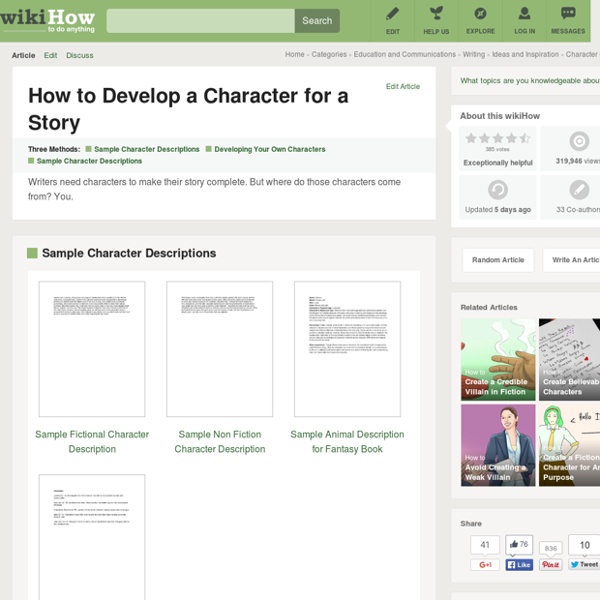 Main/Character Flaw Index To make characters realistic and relatable they are given flaws, because if there is anything a writer can be sure of it is that no one in their audience will be perfect. Flaws are character traits that have a negative impact in the narrative, unless they are simply informed. They can also be exploited. See Good Flaws, Bad Flaws for a scale of flaw acceptability. Compare Seven Deadly Sins, Ego Tropes. Abusive Parents: Habitually violent and cruel to their own children, often because that's how they themselves were raised.

RanGen - Random Generators For All! 8 ½ Character Archetypes You Should Be Writing Here’s the thing about character archetypes: everybody’s got his own take. Do you run with Joseph Campbell’s gazillion and one Jungian archetypes? How about Dramatica’s double quad of eight archetypes? Nothing wrong with running with all of them. Today, we’re going to explore my take, which is primarily based on Dramatica’s eight characters. (Featured in the Structuring Your Novel Workbook.) 1. This one doesn’t need much explanation. The main actor.The person most greatly affected by the Antagonist.The person whose reactions and actions drive the majority of the plot.The person with whom the readers will identify most strongly.The person whose inner journey, as influenced by the outer conflict, will be the most obvious manifestation of your story’s theme. Examples Ebenezer Scrooge in A Christmas Carol, Lightning McQueen in Cars, Bruce Wayne in Batman Begins, Mattie Ross in True Grit 2. This one’s also pretty clear. 3. 4. Here’s where Dramatica’s pairing of characters gets interesting. 5.

The 12 brand archetypes all successful businesses are built on Successful brands have a strong sense of identity, one that mirrors the hopes and aspirations of their customers. But finding your voice – especially as a small business – can be difficult. And expensive. Why do so many films seem to have the exact same characters in them? These characters seem to pop up all the time in books and films – and in the ways we categorise real people too. These all-too-familiar characters are called Jungian archetypes. Jungian archetypes have been adopted and examined by all sorts of groups. Branding houses will charge a premium to work out what personality types your target audience are likely to have. But it needn’t be complicated – explore the list below to finding a style that speaks to you. If you can work out what archetypes your business best fits, you’re already on the path to better communication with your customers. So, without further ado, here are the top 12 branding archetypes: 1. aka The Dreamer, The Romantic Innocent brands promise simplicity. 2.

Writing Comedy Sketches That Sell by Brian LuffThe Internet Writing Journal, July 1999 Introduction The first thing to do before you sit down and try and write a sketch, is to watch and read as many other comedy sketches as you can. Go to the library, borrow books, videos, tapes, records, lock yourself away and watch sketches until they come out of your ears. Study the masters of the art. Research While you're watching, make notes. Getting Started Never sit down in front of a blank sheet of paper. Write the titles at the top of three separate pages, and then, working on all three sketches at the same time, write down everything you can think of connected to each of the three subjects. 1) Choose a setting. Brainstorming Bounce comedy ideas off the people around you. Where do the Ideas Come From? If you're stuck, the best place to go looking for ideas for sketches is in big reference books like, for example, Halliwell's Film Guide. For example, your sketch could be a spoof of: 1) A western? "Put a Spin On It" Working Backwards