3 Types of Character Arcs: Choose the Best for Your Novel 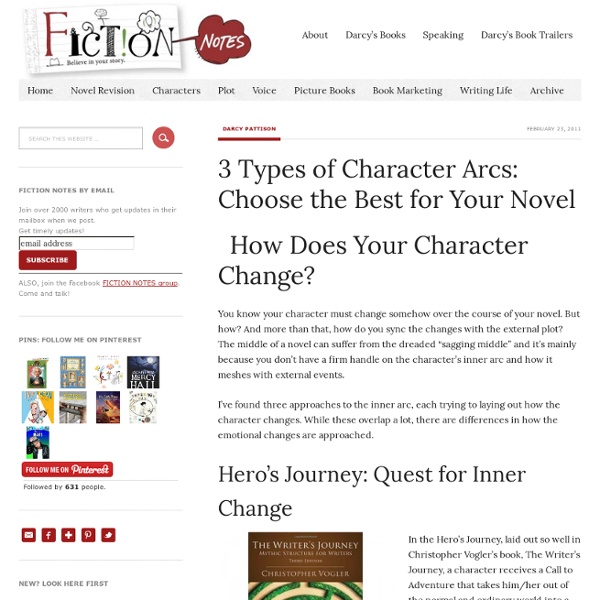 How Does Your Character Change? You know your character must change somehow over the course of your novel. But how? And more than that, how do you sync the changes with the external plot? The middle of a novel can suffer from the dreaded “sagging middle” and it’s mainly because you don’t have a firm handle on the character’s inner arc and how it meshes with external events. I’ve found three approaches to the inner arc, each trying to laying out how the character changes. Hero’s Journey: Quest for Inner Change In the Hero’s Journey, laid out so well in Christopher Vogler’s book, The Writer’s Journey, a character receives a Call to Adventure that takes him/her out of the normal and ordinary world into a world where they must quest for something. Melanie as an Example So, we’ve got Melanie who wants more than anything else to get her mother’s approval, but can’t because her mom’s a chef and Melanie can’t cook worth a flip. Iron Sharpens Iron – Friendships Back to Melanie: Flawed Way of Coping

11 Secrets to Writing Effective Character Description The following is an excerpt from Word Painting Revised Edition by Rebecca McClanahan, available now! The characters in our stories, songs, poems, and essays embody our writing. They are our words made flesh. Here are 11 secrets to keep in mind as you breathe life into your characters through description. 1. It reads something like this: “My father is a tall, middle-aged man of average build. This description is so mundane, it barely qualifies as an “all-points bulletin.” When we describe a character, factual information alone is not sufficient, no matter how accurate it might be. 2. It’s hard to think of adjective descriptors that haven’t been overused: bulging or ropy muscles, clean-cut good looks, frizzy hair. 3. In my earlier “all-points bulletin” example, the description of the father’s hair might be improved with a detail such as “a military buzz-cut, prickly to the touch” or “the aging hippie’s last chance—a long ponytail striated with gray.” 4. 5. 6. 7. 8. 9. 10. 11.

Guy Hasson's Blog - Story Design Tips: Better NPC Interaction, Part II The following blog post, unless otherwise noted, was written by a member of Gamasutra’s community. The thoughts and opinions expressed are those of the writer and not Gamasutra or its parent company. Towards Better NPC’s This is the second in a series of three articles, which will hopefully lead to richer NPC interactions, interactions that looksmore human. The first article talked about redefining NPC interaction by treating a dialogue line as an action (positive or negative) of one character on another. Doing Away with Dialogue Trees, Not Dialogue Before we begin, I’d like to clarify a point about the last article. The whole point is this: The player knows what kind of information or action he wants to get, and he chooses how to try and get the information out of the NPC (intimidate, befriend, sweet-talk, etc.) Now we’re getting to how that system should work. The Basic Build-Up of the NPC Step #1: Create a Personality for Your NPC Say you’re creating a new NPC. Our Example

Writing Characters Using Conflict & Backstory Seven Steps To Creating Characters That Write Themselves Creating characters that are believable takes time and discipline. Creating dynamically real individuals and not imposing your own thoughts and impressions upon them is not easy to do, and is often the difference between a novel or screenplay that sits in a closet and one that finds its way around town and into the hands of audiences. Spending your time building your characters before they enter the world of your story makes the process of writing an easier and more enjoyable ride, and creates a finished product that agents, publishers, producers and readers can truly be excited by. You must first agree to operate from the understanding that the three-dimensionality of your characters is not created magically. The complexity that you desire comes through: 1. The first key to deepening your work is finding the major motivators in the lives of your characters that drive their actions. 2. 3. 4. 5. Emotions are extreme. 6. 7.

Character Action and Reaction October 20, 2011 by Fiction Editor Beth Hill last modified October 20, 2011 I’ve written a lot about characters at The Editor’s Blog, but I’d like to take a deeper look into character reaction, the response of a character to the actions or words of another character or to a story event. A character’s reactions can reveal facets of his personality that cannot be revealed by action or dialogue initiated by that character. Reactions reveal issues that mean something for a character. If a character goes after the man who’s gone after his dog, readers know that the dog means something special to that character or that he is possessive/selfish, unwilling to let others touch or hurt what belongs to him. When a character responds to the actions or words or intentions of another character, the reader notices. Writers direct readers into key revelations by showing character response. A character does not need to reveal his response overtly to other characters, of course. How Characters React

How to Pick Character Names: The 7 Rules of Choosing Names for Fictional Characters Choosing a character name for your novel is as pressure-filled as picking a name for a baby. It has to suit the character’s personality, makes sense for the era and, most important, be super awesome (sorry friends, the awesome name of Brian A. Klems is already taken by this guy). I stumbled upon these seven great rules for choosing character names offered up by popular mystery writer Elizabeth Sims (the Rita Farmer Mysteries). This guest post is by bestselling author and writing authority Elizabeth Sims. 1. It’s better to call a character Caleb, which means “faithful” or “faithful dog,” than to overkill it by naming him Loyal or Goodman—unless you want that for comic/ironic purposes. 2. If you need a name for an 18-year-old shopgirl in a corset store in 1930s Atlanta, you know enough not to choose Sierra or Courtney, unless such an unusual name is part of your story. 3. Your novel might become an audiobook or an e-book with text-to-speech enabled. 4. 5. 6. 7.

NPC Characterization Like my simulationism page, this page attempts to provide advice based on my own experiences, mentioning specific games wherever possible. It starts off with things that I consider easiest, and works up to the most obscure. Other excellent places to look for NPC coding advice are Roger Firth's Inform NPC tutorial InfAct, the collection of Inform library contributions for NPCs, and Onyx Ring's tips for conversation implementation in Inform. For TADS, there's Michael J. Also, if you're wondering: this page has changed considerably since its first introduction. The Purpose of the NPC Before you code anything, you should figure out what kind of game you are writing, and what purpose you have for the NPCs who will appear in it. Even within a game, different NPCs can have different roles from a gameplay perspective. The answers to these questions will affect the rest of your NPC design. Characterization in Absentia Memory. Evidence. Overheard Conversation or Observed Action. Back to Contents

City Generator Your Scene Sucks: Know Your Stereotype Styles [35 Images] So how do you dress? I mean, do you have a strict style that you always go for? Lord knows there are a ton of different styles out there, and for some people, it’s hard picking one since it comes with a whole lifestyle most of the time. It’s not too uncommon either that people switch styles every now and then when they have grown tired of the one they have been into for a while. Just have a peek at these. Don’t Miss: - 50 Things A Geek Should Know: The Ultimate Geek Test - Celebrity Geeks You Should Know About - Disney Strips: Princes And Heroes Take It All Off! Now the only thing you have to do is settle for one I guess. Via: [UFunk - French Website]

Random City Map Generator The Random City Map Generator creates a "random" city or town map suitable for fantasy and other role-playing games (RPGs) such as Dungeons and Dragons, Pathfinder, GURPS, HERO and many others. Note: you can try out version two of this tool. Because the map is made from layered images, to save or print a map you need to either: Take a sceenshot (print screen key) and paste into an image editor; Or print the page to a pdf file (Macs have this built-in, PCs may need a product like "cutePDF".) See more caveats and planned features below. Planned Features/Caveats Yes, the streets are too ordered for most cities... a couple of completely different street layouts will be added and they will be more random/meandering. Copyright 2010 Inkwell Ideas, Inc.