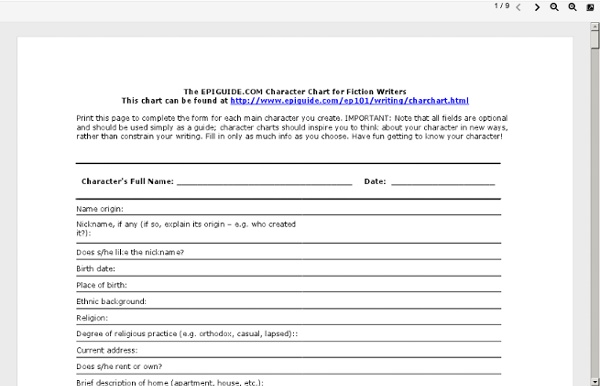 Character Trait Cheat Sheet - Kris Noel In order to create a relatable character, you must think about them as having several layers. Knowing and choosing character traits is important because you don’t want them to be one dimensional. It’s all not as simple as saying “this person is mean” or “this person is kind”. I’ve listed some examples of character types: Adventurer: high levels of energy, bold, dominant, competitive, fickle, leader. Bossy: confident, competitive, stubborn, close minded, serious, lacks shame or guilt, wants a high status. Creator: artistic, observant, persistent, sensitive, introverted, becomes easily absorbed, enthusiastic, likes his or her own company. Extrovert: outgoing, talkative, not easily intimidated, expressive, enjoys being with others, seeks social situations. Fearful: driven by fears of rejection, unhappy, withdrawn, avoids stress, uncomfortable in social situations, problems being assertive. -Kris Noel My book My goodreads

Traits of Human Consciousness Several Steps Further: Aside from the listing above, traits of human consciousness can be viewed from a number of other perspectives. Here are several: Traits Organized from Psychological (Inner-oriented) to Social (Outer-oriented) Human personality/character traits can be divided by those that are inner/psychological; and those that are outer-oriented/social. (They can then be further divided positively and negatively.) Traits Expressing in the Vertical Scale of Human Consciousness (Physical, Vital, Mental) The individual human expresses exits at three fundamental planes or levels of being -- mental, vital, and physical. ARTICLE: Positive and Negative Human Traits (from a spiritual perspective) New Fundamental Traits/Capacities that Enable Higher Achievement and Personal Growth Spiritual Traits/Capacities that Enable Vastly Higher Achievement, and Personal Growth Negative Traits/Capacities that Retard Achievement & Personal Growth Personal and Society's Values

Serendipity The 100 Most Important Things To Know About Your Character (revised) Quote from original Author(Beth):This list came about when, one day while struggling to develop a character for an upcoming Hunter game, my lovely roommate Nikki looked at me and said something like, "Wouldn't it be cool to have a list of questions you could go through and answer while you were making characters, so you'd make sure to consider all sorts of different elements in their personality?" I agreed, and that very evening we sat down over hot chocolate and ramen noodles to whip up a list of 100 appearance-, history-, and personality-related questions (which seemed like a nice even number) to answer as a relatively easy yet still in-depth character building exercise. Later on, we went through the list again, took out the questions that sucked (because there were a lot of them) and replaced them with better ones. What you see before you is the result of that second revision. Just don't email us specifically to tell us how much we suck. - Beth

Creative Writing Prompts: Secrets and Lies for Your Characters Nothing is better (or more fun for the writer) than a story-relevant secret or lie. Give some dilemma beneath the surface story to give your character depth, add suspense and tension, and keep your reader turning the pages. You can drop hints throughout your writing and when the reveal comes—you will surprise, shock, and delight your reader. Creating a character with a strong internal conflict, secret, or burden makes for one compelling read! Below are writing prompts to help you find some ideas for internal secrets, lies (and therefore conflict) for your characters. Write about a broken promise. Write about a secret. Write about a lie that protects. Write about a lie that is told to hurt. Do this brainstorming throughout the writing of your work in progress. Award-winning novelist Kathy Steffen teaches fiction writing and speaks at writing programs across the country.

What If Your Characters Don't Want Anything? Problem: I tend to view all people as passive non-entities who drift through the world while things happen to them. This is the biggest reason why I've never been successful in writing. To me, that's how the world works. People, as a rule, are incredibly boring. For nine-hundred words, that works pretty well. There needs to be a writing guide for lazy misanthropes. Nobody really cares, though. WRITERS HELPING WRITERS™ - Home of The Bookshelf MuseWRITERS HELPING WRITERS™ | Home of The Bookshelf Muse