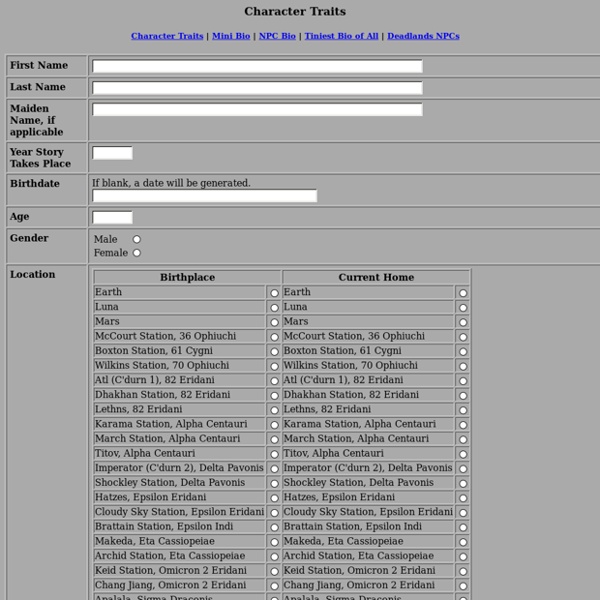 The Forgotten Language of Flowers In the early 18th century the Turkish "Secret Language of Flowers" was introduced to Europe by Lady Mary Wortley Montague, wife of the British ambassador to Constantinople. Flowers had long been a sign of romance but now lovers were able to send secret messages to each other by means of sending a posy of flowers. Each flower had a specific meaning and the order of arrangement had much to do with the intended "message". What Novelists Should Know About Short Fiction When I first started writing seriously, all I wanted was to publish a novel. I thought my intentions were honourable—that I wasn’t just another wannabe with dreams of making it big—but there was always that little part of me that still wasn’t ready to put in my dues. I wanted it all, and I wanted it right away. Then, something life-changing happened. An opportunity fell into my lap.

The Alignment System A creature's general moral and personal attitudes are represented by its alignment: lawful good, neutral good, chaotic good, lawful neutral, neutral, chaotic neutral, lawful evil, neutral evil, or chaotic evil. Alignment is a tool for developing your character's identity. It is not a straitjacket for restricting your character.

Character Trait Cheat Sheet - Kris Noel In order to create a relatable character, you must think about them as having several layers. Knowing and choosing character traits is important because you don’t want them to be one dimensional. It’s all not as simple as saying “this person is mean” or “this person is kind”. Think about the people you know in real life.

humanæ - work in progress 1. On the Customize screen turn off the Use default mobile theme option under Advanced Options. 2. Remove the stash logo from your website by getting a Full License. 3. For the Instagram feed generate your Access Token & User ID here.

150 Resources to Help You Write Better, Faster, and More Persuasively It doesn't matter if you're a student or a professional writer: there's always something new to learn and ways to make your writing more refined, better researched, and more effective. Writing is essential for students who want to succeed, whether they're enrolled in one of the top online colleges or an Ivy League university. As essential as it is, learning to write well isn't easy. The best practices for writing and research can sometimes be subjective, and the finer points of syntax and style often take a backseat to looming deadlines and strict citation guidelines. Luckily, there are many helpful resources that make it easier to build on your existing skills while learning new ones. We've compiled links to sites dedicated to helping students, bloggers, and professional writers improve their techniques while also becoming better editors and researchers.

Immram Brendan discovering the Faroes and Iceland Stamp sheet FR 252–253 of Postverk Føroya Issued: 18 April 1994 Artist: Colin Harrison An immram (/ˈɪmrəm/; plural immrama; Irish: iomramh, IPA: [ˈʊmˠɾˠəw], voyage) is a class of Old Irish tales concerning a hero's sea journey to the Otherworld (see Tír na nÓg and Mag Mell). Written in the Christian era and essentially Christian in aspect, they preserve elements of Irish mythology. The immrama are identifiable by their focus on the exploits of the heroes during their search for the Otherworld, located in these cases in the islands far to the west of Ireland. Character Flaw Index To make characters realistic and relatable they are given flaws, because if there is anything a writer can be sure of it is that no one in their audience will be perfect. Flaws are character traits that have a negative impact in the narrative, unless they are simply informed. They can also be exploited.