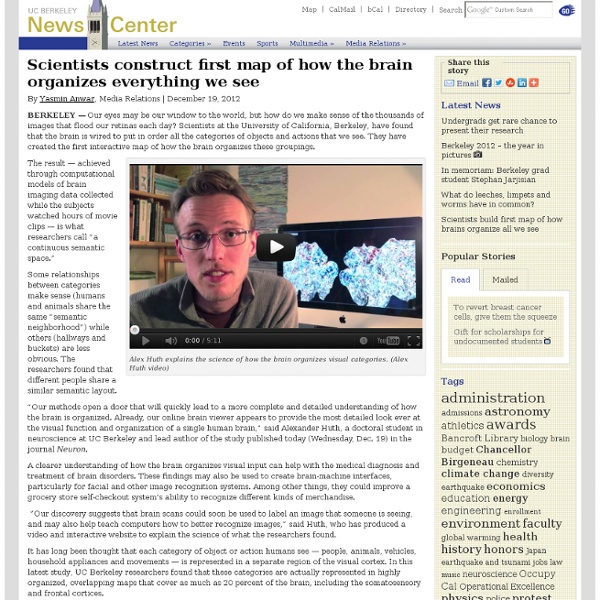 Our eyes may be our window to the world, but how do we make sense of the thousands of images that flood our retinas each day? Scientists at the University of California, Berkeley, have found that the brain is wired to put in order all the categories of objects and actions that we see. They have created the first interactive map of how the brain organizes these groupings. Alex Huth explains the science of how the brain organizes visual categories. (Alex Huth video) The result — achieved through computational models of brain imaging data collected while the subjects watched hours of movie clips — is what researchers call “a continuous semantic space.” Some relationships between categories make sense (humans and animals share the same “semantic neighborhood”) while others (hallways and buckets) are less obvious. “Our methods open a door that will quickly lead to a more complete and detailed understanding of how the brain is organized. Related:  character & structures • Expanding Consciousness

The Alignment System A creature's general moral and personal attitudes are represented by its alignment: lawful good, neutral good, chaotic good, lawful neutral, neutral, chaotic neutral, lawful evil, neutral evil, or chaotic evil. Alignment is a tool for developing your character's identity. It is not a straitjacket for restricting your character. Each alignment represents a broad range of personality types or personal philosophies, so two characters of the same alignment can still be quite different from each other. In addition, few people are completely consistent. Good vs. Good characters and creatures protect innocent life. "Good" implies altruism, respect for life, and a concern for the dignity of sentient beings. "Evil" implies hurting, oppressing, and killing others. People who are neutral with respect to good and evil have compunctions against killing the innocent but lack the commitment to make sacrifices to protect or help others. Being good or evil can be a conscious choice. Law vs.

Building 'invisible' materials with light -- ScienceDaily A new method of building materials using light, developed by researchers at the University of Cambridge, could one day enable technologies that are often considered the realm of science fiction, such as invisibility cloaks and cloaking devices. Although cloaked starships won't be a reality for quite some time, the technique which researchers have developed for constructing materials with building blocks a few billionths of a metre across can be used to control the way that light flies through them, and works on large chunks all at once. Details are published today (28 July) in the journal Nature Communications. The key to any sort of 'invisibility' effect lies in the way light interacts with a material. Metamaterials have a wide range of potential applications, including sensing and improving military stealth technology. In order to make the strings, the researchers first used barrel-shaped molecules called cucurbiturils (CBs).

Hemi-Sync Hemi-Sync is a trademarked brand name for a patented process[1][2][3] used to create audio patterns containing binaural beats, which are commercialized in the form of audio CDs. Interstate Industries Inc., created by Hemi-Sync founder Robert Monroe, is the owner of the Hemi-Sync technology. Hemi-Sync is short for Hemispheric Synchronization, also known as brainwave synchronization. The technique involves using sound waves to entrain brain waves. Replicated, double-blind, randomized trials on anesthetized patients have found Hemi-Sync effective as a partial replacement for fentanyl during surgery.[7][8] A similar study found it ineffective at replacing propofol however.[9] See also[edit] References[edit] External links[edit]

File:Plutchik-wheel.svg Cancel Edit Delete Preview revert Text of the note (may include Wiki markup) Could not save your note (edit conflict or other problem). Please copy the text in the edit box below and insert it manually by editing this page. Upon submitting the note will be published multi-licensed under the terms of the CC-BY-SA-3.0 license and of the GFDL, versions 1.2, 1.3, or any later version. Add a note Draw a rectangle onto the image above (press the left mouse button, then drag and release). Save To modify annotations, your browser needs to have the XMLHttpRequest object. [[MediaWiki talk:Gadget-ImageAnnotator.js|Adding image note]]$1 [[MediaWiki talk:Gadget-ImageAnnotator.js|Changing image note]]$1 [[MediaWiki talk:Gadget-ImageAnnotator.js|Removing image note]]$1 Quantum physics enables perfectly secure cloud computing -- ScienceDaily Researchers have succeeded in combining the power of quantum computing with the security of quantum cryptography and have shown that perfectly secure cloud computing can be achieved using the principles of quantum mechanics. They have performed an experimental demonstration of quantum computation in which the input, the data processing, and the output remain unknown to the quantum computer. The international team of scientists will publish the results of the experiment, carried out at the Vienna Center for Quantum Science and Technology (VCQ) at the University of Vienna and the Institute for Quantum Optics and Quantum Information (IQOQI), in the forthcoming issue of Science. Quantum computers are expected to play an important role in future information processing since they can outperform classical computers at many tasks. The latest research, to appear in Science, reveals that quantum computers can provide an answer to that challenge. The process works in the following manner.

Maps provide "most detailed look ever" at how the brain organizes visual information How does our brain organize the visual information that our eyes capture? Researchers at the University of California, Berkeley, used computational models of brain imaging data to answer this question and arrived at what they call “continuous semantic space” – a notion which serves as the basis for the first interactive maps showing how the brain categorizes what we see. The data on which the maps are based was collected while the subjects watched movie clips. Brain activity was recorded via functional Magnetic Resonance Imaging (fMRI), a type of MRI that measures brain activity by detecting related changes in blood flow. In order to find the correlations in the data collected, the researchers used a type of analysis known as regularized linear regression. Based on the results of that analysis, they built a model showing how each of the 30,000 or so locations in the cortex responded to each one of the 1,700 categories of objects and actions seen in the movie clips. Source: Berkeley

Evolution depends on rare chance events, 'molecular time travel' experiments show Chance events may profoundly shape history. What if Franz Ferdinand's driver had not taken a wrong turn, bringing the Duke face to face with his assassin? Would World War I still have been fought? Would Hitler have risen to power decades later? Historians can only speculate on what might have been, but a team of evolutionary biologists studying ancient proteins has turned speculation into experiment. They resurrected an ancient ancestor of an important human protein as it existed hundreds of millions of years ago and then used biochemical methods to generate and characterize a huge number of alternative histories that could have ensued from that ancient starting point. Tracing these alternative evolutionary paths, the researchers discovered that the protein – the cellular receptor for the stress hormone cortisol – could not have evolved its modern-day function unless two extremely unlikely mutations happened to evolve first. Explore further: Big toe's big bone holds evolutionary key

[Le mindmapping pour tous] Brain Welcome to the pycortex WebGL MRI viewer! This viewer shows how information about thousands of object and action categories is represented across human neocortex. The data come from brain activity measurements made using fMRI while a participant watched hours of movie trailers. Computational modeling procedures were used to determine how 1705 distinct object and action categories are represented in the brain. Warning:This page uses WebGL, an experimental web technology. Instructions: On the left is a 3D model of one participant's cortical surface. Caveat: All of the category-specific responses shown here are based on blood-oxygen level dependent (BOLD) responses recorded while participants watched 2 hours of natural movies. Hints: The 3D viewer will run much faster if the ROI labels are disabled. Credits: The pycortex WebGL MRI viewer was written by James Gao.

Spiritual Emergencies: Understanding and Treatment of Psychospiritual Crises One of the most important implications of the research of holotropic states is the realization that many of the conditions, which are currently diagnosed as psychotic and indiscriminately treated by suppressive medication, are actually difficult stages of a radical personality transformation and of spiritual opening. If they are correctly understood and supported, these psychospiritual crises can result in emotional and psychosomatic healing, remarkable psychological transformation, and consciousness evolution (Grof and Grof 1989, 1990). Episodes of this nature can be found in the life stories of shamans, founders of the great religions of the world, famous spiritual teachers, mystics, and saints. Mystical literature of the world describes these crises as important signposts of the spiritual path and confirms their healing and transformative potential. It is, therefore, in the interest of all of us to find ways of bringing spirituality back into our individual and collective life. 1.

Math algorithm tracks crime, rumours, epidemics to source (Phys.org) -- A team of EPFL scientists has developed an algorithm that can identify the source of an epidemic or information circulating within a network, a method that could also be used to help with criminal investigations. Investigators are well aware of how difficult it is to trace an unlawful act to its source. The job was arguably easier with old, Mafia-style criminal organizations, as their hierarchical structures more or less resembled predictable family trees. In the Internet age, however, the networks used by organized criminals have changed. Innumerable nodes and connections escalate the complexity of these networks, making it ever more difficult to root out the guilty party. "Using our method, we can find the source of all kinds of things circulating in a network just by 'listening' to a limited number of members of that network," explains Pinto. Out in the real world, the algorithm can be employed to find the primary source of an infectious disease, such as cholera.

Why Physicists Are Saying Consciousness Is A State Of Matter, Like a Solid, A Liquid Or A Gas — The Physics arXiv Blog There’s a quiet revolution underway in theoretical physics. For as long as the discipline has existed, physicists have been reluctant to discuss consciousness, considering it a topic for quacks and charlatans. Indeed, the mere mention of the ‘c’ word could ruin careers. That’s finally beginning to change thanks to a fundamentally new way of thinking about consciousness that is spreading like wildfire through the theoretical physics community. Today, Max Tegmark, a theoretical physicist at the Massachusetts Institute of Technology in Cambridge, sets out the fundamental problems that this new way of thinking raises. Tegmark’s approach is to think of consciousness as a state of matter, like a solid, a liquid or a gas. He goes on to show how the particular properties of consciousness might arise from the physical laws that govern our universe. In 2008, Tononi proposed that a system demonstrating consciousness must have two specific traits. Tegmark does not have an answer.