Neuroscience of Free Will 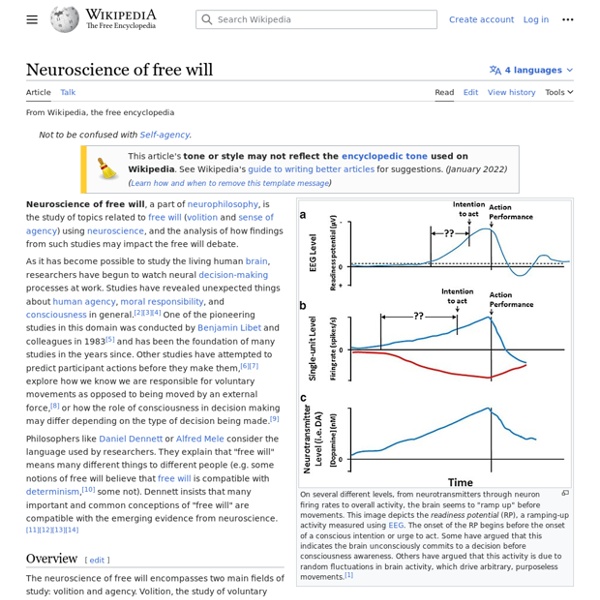 Neuroscience of free will is the part of neurophilosophy that studies the interconnections between free will and neuroscience. As it has become possible to study the living brain, researchers have begun to watch decision making processes at work. Findings could carry implications for our sense of agency and for moral responsibility and the role of consciousness in general.[1][2][3] Relevant findings include the pioneering study by Benjamin Libet and its subsequent redesigns; these studies were able to detect activity related to a decision to move, and the activity appears to begin briefly before people become conscious of it.[4] Other studies try to predict activity before overt action occurs.[5] Taken together, these various findings show that at least some actions - like moving a finger - are initiated unconsciously at first, and enter consciousness afterward.[6] A monk meditates. Overview[edit] -Patrick Haggard[6] discussing an in-depth experiment by Itzhak Fried[13] Criticisms[edit]

frontline: the persuaders: neuromarketing But 30 years after the commercials debuted, neuroscientist Read Montague was still thinking about them. Something didn't make sense. If people preferred the taste of Pepsi, the drink should have dominated the market. The Unobservable Mind Consciousness is more familiar to us than any other feature of our world, since it is the route by which anything at all becomes familiar. But this is what makes consciousness so hard to pinpoint. Look for it wherever you like, you encounter only its objects – a face, a dream, a memory, a color, a pain, a melody, a problem, but nowhere the consciousness that shines on them. Trying to grasp it is like trying to observe your own observing, as though you were to look with your own eyes at your own eyes without using a mirror.

INTP Profile Introverted iNtuitive Thinking Perceiving by Joe Butt Profile: INTP Revision: 3.2 Date of Revision: 6 Aug 2010 INTPs are pensive, analytical folks. They may venture so deeply into thought as to seem detached, and often actually are oblivious to the world around them. Tech breakthroughs are reshaping retail shopping in the USA SANTA CLARA, Calif. – Nola Donato has seen the future of retail, and it is in a Magic Mirror. The Intel scientist has designed a high-tech mirror that shows how clothes look on a consumer who simply stands in front of an LCD monitor. Parametric technology simulates body type and how fabrics fit — based on weight, height and measurements.

Mind-reading scan identifies simple thoughts - health - 26 May 2011 A new new brain imaging system that can identify a subject's simple thoughts may lead to clearer diagnoses for Alzheimer's disease or schizophrenia – as well as possibly paving the way for reading people's minds. Michael Greicius at Stanford University in California and colleagues used functional magnetic resonance imaging (fMRI) to identify patterns of brain activity associated with different mental states. He asked 14 volunteers to do one of four tasks: sing songs silently to themselves; recall the events of the day; count backwards in threes; or simply relax. Participants were given a 10-minute period during which they had to do this. For the rest of that time they were free to think about whatever they liked. The participants' brains were scanned for the entire 10 minutes, and the patterns of connectivity associated with each task were teased out by computer algorithms that compared scans from several volunteers doing the same task.

How to Make a Mind Map® The 'Laws of Mind Mapping' were originally devised by Tony Buzan when he codified the use of imagery, colour and association and coined the phrase 'Mind Mapping'. In the intervening 30 plus years, there have been many variations on the original 'Mind Map ' and the widespread usage of mapping software of various sorts, has dramatically changed what is possible. >> Click here to go to a video that provides a rapid (99 second) overview of how to Mind Map. (Note that you will be asked for your e-mail address so that you can view the video free of charge). The summary below is based on Buzan's structure (a 'Mind Mapping, how to' - details available in his many books) but we believe that whilst this structure is great for establishing well structured maps that can be used in many different ways, variations on these rules or 'laws' are often sensible and appropriate - as long as they are based on an understanding of why the laws exist and what they are trying to help the mind mapper to achieve.

Beautiful Minds: The Psychology of the Savant In the field of brain research there is no subject more intriguing than the savant - an individual with mental, behavioral, or even physical disability who possesses acute powers of observation, mathematical aptitude, or artistic talent. This three-part series provides an enthralling look into the psychology and neuroscience of the savant’s mysterious world. 3-part series, 53 minutes each. Memory Masters: How Savants Store Information. Reudiger Gamm performs complex arithmetic instantly and without help - his brain stores numbers like a calculator. Orlando Sorrel remembers exactly what he was doing on any date, at any hour, and can accurately predict the day of the week thousands of years in the future.

ver la bella : how to stay positive + present when life's hard After noticing that my pup, Bella, had lost about a pound (quite a lot for an 8 lb. dog!), I took her for a checkup. I'd expected be asked to make some changes to her diet, but I never thought I'd be facing a dire diagnosis: kidney trouble. When I received the initial test results (results that were vague but disheartening), I experienced what I guess are typical responses. First I was shocked, then incredibly sad, then swept away by a wave of powerlessness and disbelief. All the while I was bombarded with the barrage of questions in my mind: How could my little pup -- only 8-years-old and so seemingly healthy -- be suffering from such a serious illness?

Emotional Intensity Do you consider yourself an emotional person? If a potential friend candidly described you that way to your face, would you be flattered or disturbed? Compared to most people you know, are you stronger in the intensity and range of your feelings, milder, or somewhere in between? Whereas for centuries astute observers of the human condition have noted that people vary remarkably in this dimension — it's been the theme of many great novels — only recently have psychologists come to understand that this difference is already apparent on our first day of postnatal existence — and continues strikingly unchanged ever after. Emotional Intensity clearly plays a major role in love relationships, yet has oddly been all but ignored professionally. The vast realm of our feelings is clearly experienced differently by people across cultures.

Artist Manipulates Water With The Power Of Her Mind "Man is something that shall be overcome. What have you done to overcome him?” asked existentialist philosopher Friedrich Nietzsche.