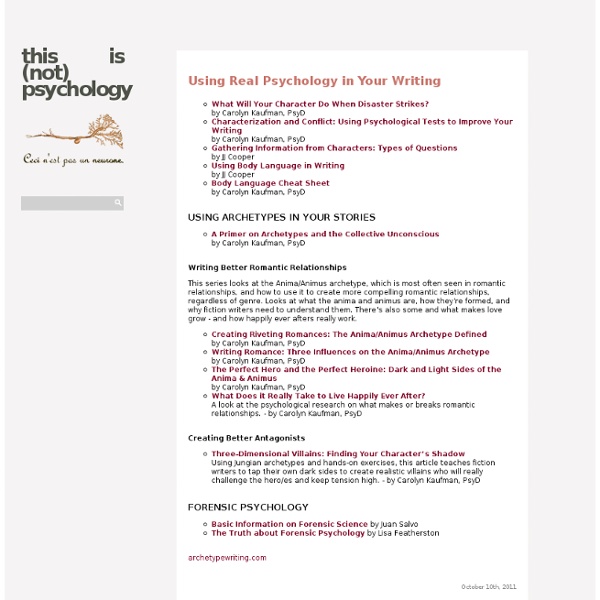 The Psychology Of Color "Color has long been understood to be something which appeals greatly to our visual senses, and it is frequently a tool utilized in marketing. Countless studies have found that particular colors have their own effects on consumers, with some colors stimulating areas of the brain in ways which will either promote excitement or tranquility. In this manner, corporations and popular businesses and brands can easily target their market simply by picking the right combination of colors to visualize their marketing campaign, logo, content and website. How are you incorporating color into your website design?" Take a look at the below infographic and learn how colors influence people.Click image to enlarge. Ultimately, the use of color in marketing and business can be fine tuned dependent on one's need. Courtesy of: homestead.

Unique Plots Psychological Facts Psychology is a powerful thing. It’s responsible for so much of what we do in life whether we’re conscious of it or not. Luckily, we’re here to help enlighten you about your own brain. Here are eight powerful psychological facts that will help you understand a lot more about life. 1). Ever wondered why certains brands pick the colors they do for their logos? 2.) When complementing a child it’s better to focus on the hard work they put in to achieve the result rather than praising their intelligence. 3.) Video gamers are better at lucid dreaming than non-gamers. 4.) A pair of watching eyes whether real or not will make us all more honest, according to research from the University of New Castle. On the days when printed eyes were at the top of the price list rather than a picture of flowers the staff paid more for their coffee. 5.) When you’re in an argument be careful using the word “you”. 6.) Need a yes? When you’re asking someone for something make sure you nod your head. 7.) 8.)

Psychological Experiments We present you the most notorious and most popular experiments of all-time. Some of the most fascinating and deplorable experiments ever conducted that proove that we do have a dark side… During the 1950s, Solomon Asch conducted and published a series of laboratory experiments that demonstrated the degree to which an individual’s own opinions are influenced by those of a majority group. Male college students participated in a simple “perceptual” task. Only one participant was actually a genuine subject for the experiment, the rest being confederates, carefully tutored to give certain pre-selected responses. The participants gave a variety of answers, at first correct, to avoid arousing suspicion in the subject, but then with some incorrect responses added. The Asch Experiment results were interesting and showed that peer pressure could have a measurable influence on the answers given. The researchers had three hypotheses: 1. Overall 40% offered some help to the victim. 1.

10 Tips for Writing Loglines Loglines are tricky things – distilling 120 pages of script into one sentence and imbuing it with the power to summarise, titillate and intrigue is a surprisingly difficult task. As a writer it can be hard to develop a good logline because you are invested equally in each part of your work – identifying the crucial story elements and leaving everything else out feels like you aren’t doing your script justice. But remember, a good logline is crucial to selling your script; in a covering letter, in a pitch, in the 30 second window you have with an executive when you accidentally meet on the Great Wall of China. The difference between a logline and a tagline A logline is a one (or occasionally two) sentence description that boils the script down to its essential dramatic narrative in as succinct a manner as possible. A tagline is a piece of marketing copy designed to go on posters to sell the film - In space no one can hear you scream (Alien) Not sure where to begin? 1. 2. - A sous-chef 3. 4.

How the Brain Works by Maria Popova From the caves of memory to the castles of deception, by way of naughty neurotransmitters and giddy ganglia. Scientists are only just beginning to understand how the brain works — from what transpires in it while we sleep to how to optimize its memory to what love does to it to how music affects it — and the rest of us fall somewhere on the spectrum between fascinated and confused when it comes to the intricate inner workings of our master-controller. From British indie press Nobrow — who also brought us Freud’s graphic biography, those lovely illustrated chronicles of the Space Race and aviation, as well as Blexbolex’s magnificent No Man’s Land — comes Neurocomic (public library), a graphic novel about how the brain works. We take a stroll through a forest of neurons, then learn about neuroplasticity. This wonderful trailer for the film about the project, directed by Richard Wyllie, takes us behind the scenes of the duo’s marvelous collaboration and creative process:

Author Andy Weir Shares Advice on How to Write More You have ideas for stories, but when you launch your word processor, you stare helplessly at a blank page. Every time you try to write, you end up spending the evening watching videos of cats on YouTube instead. Why is this happening? We’ve all been there. (Do you need different agents if you write multiple genres?) Column by Andy Weir, who was first hired as a programmer for a national lab at age fifteen and has been engineering software ever since. 1: You don’t know which story to pick You don’t just have one idea, you have several. The problem with the above logic is that it leads to a stalemate. Solution: Write the first chapter of each story. 2: Stories are always more awesome in your head than they are on paper Your heroine, Susan, had neglectful and disinterested parents. That’s the idea you had, anyway. “Susan first saw Joe at the diner. After a few incidents like this, you got gun-shy about writing. Solution: Ok, so it won’t be what you imagined. Oh, admit it. No Related Posts

Psychology of Trust in Work and Love by Maria Popova The science of why tit-for-tat isn’t the best strategy for cooperation and why you should hear out your hunches. “When you trust people to help you, they often do,” Amanda Palmer asserted in her beautiful meditation on the art of asking without shame. But what does it really mean to “trust,” and perhaps more importantly, how can we live with the potential heartbreak that lurks in the gap between “often” and “always”? That’s precisely what psychologist David DeSteno, director of Northeastern University’s Social Emotions Lab, explores in The Truth About Trust: How It Determines Success in Life, Love, Learning, and More (public library). DeSteno, who has previously studied the osmosis of good and evil in all of us and the psychology of compassion and resilience, argues that matters of trust occupy an enormous amount of our mental energies and influence, directly or indirectly, practically every aspect of our everyday lives. The short answer is that we have to.