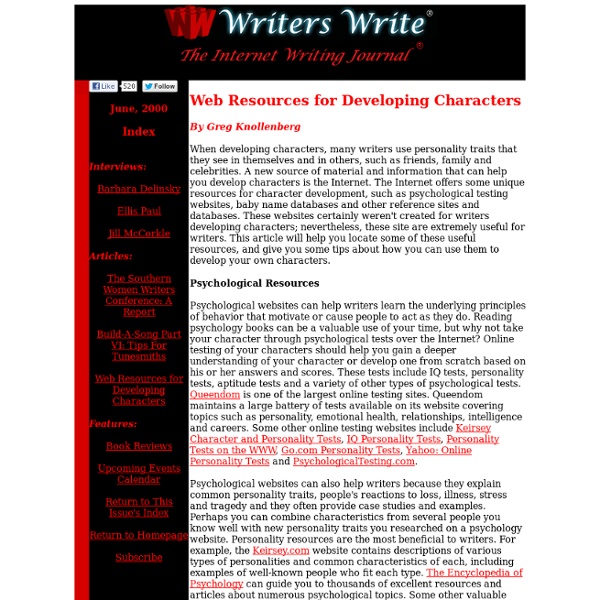 When developing characters, many writers use personality traits that they see in themselves and in others, such as friends, family and celebrities. A new source of material and information that can help you develop characters is the Internet. The Internet offers some unique resources for character development, such as psychological testing websites, baby name databases and other reference sites and databases. These websites certainly weren't created for writers developing characters; nevertheless, these site are extremely useful for writers. This article will help you locate some of these useful resources, and give you some tips about how you can use them to develop your own characters. Psychological Resources Psychological websites can help writers learn the underlying principles of behavior that motivate or cause people to act as they do. Biography Resources Biography resources can be a great help to writers. Naming Characters Other Resources Developing Characters

Tami Cowden | Author I am happy to say that The Complete Writers’ Guide to Heroes and Heroines is now available on Kindle! And even better – so is Fallen Heroes: Sixteen Master Villain Archetypes! What are the Sixteen Master Archetypes? The word "archetype" was coined by Carl Jung, who theorized that humans have a collective unconscious, "deposits of the constantly repeated experiences of humanity.... a kind of readiness to reproduce over and over again the same or similar mythical ideas...." The observations my coauthors and I made are that there are recurring character types who have starred in story after story, entertaining and informing the human experience for millennia. At his or her core, every well-defined hero or heroine is one of the respective archetypes. But beware when trying to decide what archetypal family to which a character belongs. I am serious – what the character does is not the defining element. “Any archetype can do anything – the question will always be why.” Top

How to Poison your Ficiontal Characters Do you have a fictional character you need to kill, but you don't want them strangled or shot or stabbed with a knife? Do you want your murderer to kill them without letting anyone know what you plan to do or who your killer is? Try using poison. Unlike other forms of murder, poisoning is fast and easy and doesn't require strength or a good aim, and if it's done properly, by the time the person realizes he's been poisoned, it's too late, he's already dead. Care to have one of your characters try her hand at murder? Hemlock: All parts of the plant are poisonous. There are many other poisons, too many to list here, and most of them are available to the average person. Are you thinking of writing a historical and don't know what was available at the time? Think about the needs of your story, and with a little imagination and some interesting research, you should be able to come up with just the right poison to kill that doomed character.