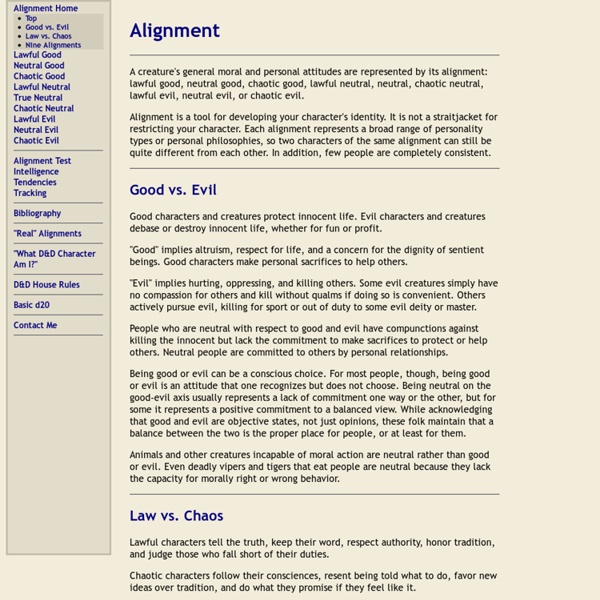 A creature's general moral and personal attitudes are represented by its alignment: lawful good, neutral good, chaotic good, lawful neutral, neutral, chaotic neutral, lawful evil, neutral evil, or chaotic evil. Alignment is a tool for developing your character's identity. It is not a straitjacket for restricting your character. Each alignment represents a broad range of personality types or personal philosophies, so two characters of the same alignment can still be quite different from each other. In addition, few people are completely consistent. Good vs. Good characters and creatures protect innocent life. "Good" implies altruism, respect for life, and a concern for the dignity of sentient beings. "Evil" implies hurting, oppressing, and killing others. People who are neutral with respect to good and evil have compunctions against killing the innocent but lack the commitment to make sacrifices to protect or help others. Being good or evil can be a conscious choice. Law vs.

Using Real Psychology in Your Writing Using Real Psychology in Your Writing Using Archetypes in Your Stories Writing Better Romantic Relationships This series looks at the Anima/Animus archetype, which is most often seen in romantic relationships, and how to use it to create more compelling romantic relationships, regardless of genre. Looks at what the anima and animus are, how they're formed, and why fiction writers need to understand them. There's also some and what makes love grow - and how happily ever afters really work. Creating Better Antagonists Forensic Psychology

Type Descriptions — The Enneagram Institute Below are links to short descriptions of each of the Enneagram Types. See a free, complete expanded type description of Type Eight (“The Challenger”) as a sample of the 2,800-word type profiles that you will have access to to when you take the validated RHETI Enneagram test. The Rational, Idealistic Type: Principled, Purposeful, Self-Controlled, and Perfectionistic The Caring, Interpersonal Type: Demonstrative, Generous, People-Pleasing, and Possessive The Success-Oriented, Pragmatic Type: Adaptive, Excelling, Driven, and Image-Conscious The Sensitive, Withdrawn Type: Expressive, Dramatic, Self-Absorbed, and Temperamental The Intense, Cerebral Type: Perceptive, Innovative, Secretive, and Isolated The Committed, Security-Oriented Type: Engaging, Responsible, Anxious, and Suspicious The Busy, Fun-Loving Type: Spontaneous, Versatile, Distractible, and Scattered The Powerful, Dominating Type: Self-Confident, Decisive, Willful, and Confrontational

How to Build a Universe That Doesn't Fall Apart Two Days Later First, before I begin to bore you with the usual sort of things science fiction writers say in speeches, let me bring you official greetings from Disneyland. I consider myself a spokesperson for Disneyland because I live just a few miles from it — and, as if that were not enough, I once had the honour of being interviewed there by Paris TV. For several weeks after the interview, I was really ill and confined to bed. I think it was the whirling teacups that did it. Elizabeth Antebi, who was the producer of the film, wanted to have me whirling around in one of the giant teacups while discussing the rise of fascism with Norman Spinrad... an old friend of mine who writes excellent science fiction. Science fiction writers, I am sorry to say, really do not know anything. It reminds me of a headline that appeared in a California newspaper just before I flew here. Well, I will tell you what interests me, what I consider important. But the problem is a real one, not a mere intellectual game.

Articles This is a jumping-off point for my articles on all the stuff I’ve learned (and am learning) in relation to the question “Who am I?” – information, knowledge, wisdom and experience that I have found to be valid and useful. Personality I have been interested in personality for as long as I can remember. Spirituality The Michael Teachings For a long time I have been informed and inspired by many great spiritual teachings. The Michael teachings have given me a complete and systematic understanding of who we are, why we are here, and how those two relate. Enlightenment Intensives Enlightenment Intensives have played (and still play) a huge role in my life. PersonalitySpirituality.net

Immram Brendan discovering the Faroes and Iceland Stamp sheet FR 252–253 of Postverk Føroya Issued: 18 April 1994 Artist: Colin Harrison An immram (/ˈɪmrəm/; plural immrama; Irish: iomramh, IPA: [ˈʊmˠɾˠəw], voyage) is a class of Old Irish tales concerning a hero's sea journey to the Otherworld (see Tír na nÓg and Mag Mell). Written in the Christian era and essentially Christian in aspect, they preserve elements of Irish mythology. The immrama are identifiable by their focus on the exploits of the heroes during their search for the Otherworld, located in these cases in the islands far to the west of Ireland. Definition[edit] The immrama are generally confused with a similar Irish genre, the echtrae or "adventure". Stories[edit] Originally there were seven officially recognised Immram listed in a list of ancient texts[citation needed]. Origins[edit] One of the first Celticists, Heinrich Zimmerman, attempted to link the immram with the Aeneid and the Odyssey. Influence[edit] Irish author C.

How to Design Your Climates Personality Flaws of the 4 Elements - Pandora Astrology Human temperament is made from combinations of the four elements, Fire, Earth, Air and Water. Everyone has all four, but in different proportions. Everyone also differs in how well they express each element—whether that element is expressed mostly in a clean and clear way or in a distorted way. It’s not that some parts of your chart are good and some are bad. And so, as a cautionary study, what follows is a look at what happens when each of the 4 elements goes terribly, terribly wrong. Fire The Fire side of us is naturally upbeat, cheerful and energetic. Earth Earth’s nature makes it practical, pragmatic, grounded, serious and realistic. Air Air represents the mental side of human nature, so Air types tend to be idea people—intellectual and curious types. Water Water represents the emotional side of human life: Water grants us feelings, intuition, instinct, empathy and compassion. So there they are, the four Elements in all their very worst aspects.