Archetypes: Find Your Archetype & Discover Yourself 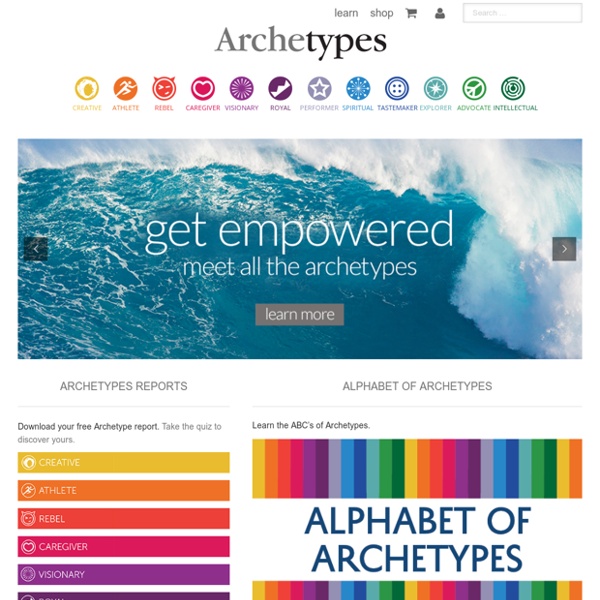 Prismatic 100+ Sites to Download All Sorts of Things These days you can find all sorts of things online, from audio books to flash files, from sound effects to CSS templates. Below we compiled a list with over 100 download sites that serve that purpose. We will also try to keep the list updated, so if your favorite download site is not here, let us know about it with a comment. Audio Books Librivox: One of the most popular audio libraries on the web. The LibriVox volunteers record books that are in the public domain and release them for free. Podiobooks: Similar to podcast, Podiobooks are serialized audiobooks that are distributed through RSS feeds. Oculture (Audio & Podcast): Offers a rich array of educational and cultural media. Learn Out Loud: A one-stop destination for video and audio learning resources. BitTorrent The Pirate Bay: The web’s largest collection of bit torrent trackers. Torrent Portal : This P2P and file sharing site works like Google by linking only to .torrent metafiles and captures the caches of those files. eBooks Clipart

The Most-viewed YouTube Videos of All Time YouTube’s most popular videos aren’t the same as they were in years past. Videos considered viral back then wouldn’t necessarily be as popular now. And while videos like Charlie Bit My Finger or Chocolate Rain went viral during the first five years of YouTube’s most viewed content, popular musicians like Katy Perry and Maroon 5 currently dominate the list. Music videos are now the most popular videos ever viewed in YouTube’s history. Younger generations of web users clearly view YouTube as the most trusted media platform in the world. 10. Katy Perry continues to hold her Top 10 reign as Roar maintains its popularity. As the oldest music video on our list other than Gangnam Style, Roar apparently has real staying power and should continue to be one of the world’s most viewed YouTube videos for some time to come. 9. You wouldn’t expect a music video loosely based on 2005’s romantic comedy Wedding Crashers to be a mega-hit, but that’s exactly what happened with Maroon 5’s Sugar. 8. 7. 6.

The Future Of Technology Isn't Mobile, It's Contextual You’re walking home alone on a quiet street. You hear footsteps approaching quickly from behind. It’s nighttime. Your senses scramble to help your brain figure out what to do. It’s called situational awareness. Here’s the rub: Our senses aren’t attuned to modern life. Contextual Computing: Our Sixth, Seventh, and Eighth senses In the coming years, there will be a shift toward what is now known as contextual computing, defined in large part by Georgia Tech researchers Anind Dey and Gregory Abowd about a decade ago. Hints of this shift are already arriving. These merely scratch the surface. For that to happen, computer scientists, technology companies, and users all need to understand and buy into the requirements and possibilities of contextual computing. You Need Four Data Graphs to Make It Work At Jump, we’ve identified four data graphs essential to the rise of contextual computing: social, interest, behavior, and personal. The Social Graph Is About Connections

How to Find Your Purpose and Do What You Love by Maria Popova Why prestige is the enemy of passion, or how to master the balance of setting boundaries and making friends. “Find something more important than you are,” philosopher Dan Dennett once said in discussing the secret of happiness, “and dedicate your life to it.” But how, exactly, do we find that? Every few months, I rediscover and redevour Y-Combinator founder Paul Graham’s fantastic 2006 article, How to Do What You Love. What you should not do, I think, is worry about the opinion of anyone beyond your friends. More of Graham’s wisdom on how to find meaning and make wealth can be found in Hackers & Painters: Big Ideas from the Computer Age. Alain de Botton, modern philosopher and creator of the “literary self-help genre”, is a keen observer of the paradoxes and delusions of our cultural conceits. In The Pleasures and Sorrows of Work, he takes his singular lens of wit and wisdom to the modern workplace and the ideological fallacies of “success.” 16. 28. This is your life.

YouTube most watched 2019: These are the top viewed videos of the year Obviously Gordon Ramsay is on here YouTube has compiled a list of the most watched videos in the UK in 2019. Among the top viewed videos is the classic James Charles and Tati Westbrook saga, Britain’s Got Talent moments and of course there’s some classic Gordon Ramsay in there too. The site has also listed its top watched music videos including artists such as Ariana Grande, Ed Sheeran and Sam Smith. Classic YouTube most watched 2019: The following list shows the videos in order of their views in the UK – with their listed global views above. 1. Global views: 9.8million Liverpool’s UEFA Champions League defeat against Barcelona was the most popular video on YouTube for UK users in 2019. 2. Global views: 48million The James Charles x Tati Westbrook drama hooked the world, so it’s no surprise his video spilling the tea is up there as one of the top viewed. The pair fell out when Tati posted her infamous (since deleted) “BYE SISTER” video accusing James Charles of all sorts. 3. 4. 5. 6. 7. 8. 9.

Youtube's most-viewed music videos of 2019 so far YouTube has revealed its most-viewed music videos of 2019 so far - and Latin pop makes up half of the Top 10. YouTube reaches almost 2 billion people around the world every month, and it seems most of its users can't get enough of Spanish-language songs. The most watched music video of the year to date is Daddy Yankee's Con Calma, with 1.16 billion views so far. Ariana Grande's 7 Rings, which places fifth with 484 million views, is the only song performed entirely in English. MORE: Ariana Grande's full Official UK Charts history. Spanish singer Rosalia claims the most watched video by a female artist - her song Con Altura ft. Elsewhere, K-Pop is represented in the list by Blackpink's Kill This Love and BTS' collaboration with Halsey Boy With Luv. MORE: Foreign language songs that reached Number 1 in the UK Hindi singer Dhvani Bhanushali also features in the list with viral hit Vaaste. YouTube's Top 10 most-viewed music videos of 2019 so far

The Ultimate Social Media Holiday Calendar for 2017 [Resource] Whether it's International Cat Day, Pizza Day, or Talk Like a Pirate Day, it seems like almost every day, the internet is celebrating a holiday. Whenever I log onto Twitter, I quickly scan what's trending on the left-hand side of the screen. Have you ever had this experience -- when you see an obscure holiday or observance day trending, and you think to yourself "Yup, I'm celebrating that"? Manage and plan your social media content with the help of this free calendar template. Some of these holidays might be simply too silly for your brand to engage with (and we certainly don't suggest sharing content on social media and then tacking on a completely irrelevant hashtag for the sake of traffic -- that's just plain annoying). From food to politics to animals and everything in between, there is a plethora of observance days worldwide during which marketers can share content relevant to their industries, get involved in a movement, or simply generate more awareness. March 2017 April 2017 May 2017

Similar Sites - Find Similar Sites | Related Sites | Sites Like ON EDGE — Science Gallery London Curator Producer for ON EDGE – Mette Kjærgaard Præst Season Advisors As a catalyst for creative collaborations in art and science, we draw on the expertise of a group of people who approach the season topic from their individual artistic or scientific perspectives. Advisors help Science Gallery London to shape the content and direction of the season so that it becomes something that has credence in their respective worlds. The advisors for ON EDGE are: Thalia Eley, Professor of Developmental Behavioural Genetics, Social, Genetic & Developmental Psychiatry Centre, Institute of Psychiatry, Psychology & Neuroscience, King’s College LondonErrol Francis, Chief Executive, Culture&Colette Hirsch, Senior Lecturer in Clinical Psychology, Department of Psychology, Institute of Psychiatry, Psychology & Neuroscience, King’s College London