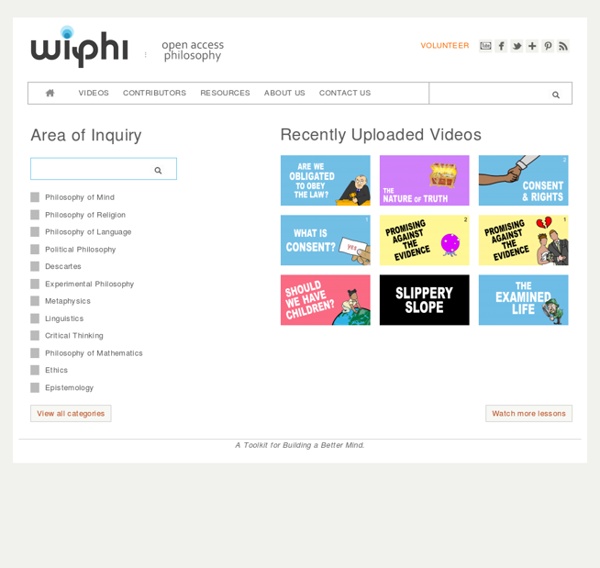 1000-Word Philosophy | Philosophy, One Thousand Words at a Time Logic Puzzles - Play Online or Print Your Own for Free! Steven Poole – On teleology It was an idea long consigned to the dustbin of scientific history. ‘Like a virgin consecrated to God,’ Francis Bacon declared nearly 400 years ago, it ‘produces nothing’. It was anti-rational nonsense, the last resort of unfashionable idealists and religious agitators. And then, late last year, one of the world’s most renowned philosophers published a book arguing that we should take it seriously after all. Biologists and philosophers lined up to give the malefactor a kicking. The thinker was Thomas Nagel, the book was Mind and Cosmos, and the idea was teleology. The extraordinary success since then of non-teleological scientific thinking and its commitment to forwards-only ‘mechanistic causation’ would seem to support Bacon’s denunciation of teleology. The idea that living things had purpose would not go away, and it sparked developments in fields beyond biology itself. Nagel says that the appearance of conscious beings such as us can be described as the universe waking up Metaphysics

Lost Type Co-op Talking Philosophy | The Philosophers' Magazine Blog Hi-Phi Nation – A show about philosophy that turns stories into ideas. Branches of Philosophy Philosophy can be divided into five branches which address the following questions: There is a hierarchical relationship between these branches as can be seen in the Concept Chart. At the root is Metaphysics, the study of existence and the nature of existence.

Teach Philosophy 101 > Home Writing A Philosophy Paper - Department of Philosophy Good writing is the product of proper training, much practice, and hard work. The following remarks, though they will not guarantee a top quality paper, should help you determine where best to direct your efforts. I offer first some general comments on philosophical writing, and then some specific "do"s and "don't"s. One of the first points to be clear about is that a philosophical essay is quite different from an essay in most other subjects. Above all, it means that there must be a specific point that you are trying to establish - something that you are trying to convince the reader to accept - together with grounds or justification for its acceptance. Before you start to write your paper, you should be able to state exactly what it is that you are trying to show. The next task is to determine how to go about convincing the reader that your thesis is correct. Second, the ones that will stand out will be the very best ones and the very worst ones. Lengthy introductions.

A History of Ideas Copyrighted image Credit: BBC Radio 4 offers listeners a fresh take on some of the big questions that have preoccupied thinkers down the ages in a major new 60-part series. About the series A History Of Ideas takes the listener into some of the most significant ideas in history, with topics ranging from beauty and freedom to technology and morality. The series will hear from lawyers, philosophers, neuroscientists, theologians and others, all with distinctive takes on the question under consideration. Each week will begin on the Monday with four thinkers, preeminent in their respective fields, discussing one specific question - with Melvyn Bragg presiding over the exchange of views. Visit the BBC web pages 4 about A History of Ideas to find out more including how to listen on iPlayer. The current episodes and animations Week 6: How has technology changed us? Monday 26 January to Friday 30 January

AITopics Historical Introduction to Philosophy/The Problem of Evil Home BackForward Reading Questions[edit] How do concepts change over time?What was the ancient concept of Evil, and what is its modern counterpart? Terms[edit] Hellenes is a term for either ancient or modern Greeks (used in this fashion to note that at the time the nation/national identity of Greece did not exist) B.C.E. Introduction[edit] The problem of evil is not a simple topic, nor is it free from the fetters of religious interpretation and influence. There is perhaps, the possibility that God is a combination of both good and evil (dualism). He explained the apparent irony in this way: Is this state of affairs in accordance with God's will or not? But anyone who has been in authority knows how a thing can be in accordance with your will in one way and not in another. So our problem is this: Why does a good and all powerful God allow evil? If God were to suddenly wipe out all traces of evil, free will would be lost, and we would become animals. Evil and Good[edit] Conclusion.