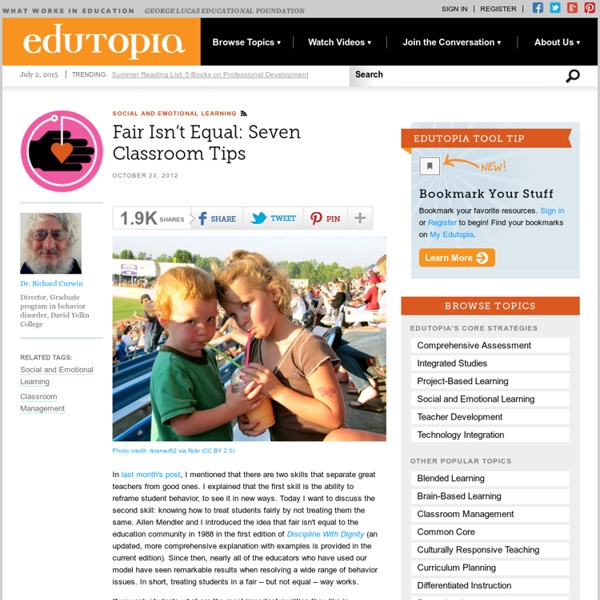 In last month's post, I mentioned that there are two skills that separate great teachers from good ones. I explained that the first skill is the ability to reframe student behavior, to see it in new ways. Today I want to discuss the second skill: knowing how to treat students fairly by not treating them the same. Allen Mendler and I introduced the idea that fair isn't equal to the education community in 1988 in the first edition of Discipline With Dignity (an updated, more comprehensive explanation with examples is provided in the current edition). If you ask students what are the most important qualities they like in teachers, one of the universally top-mentioned is fairness. But what is fair? The most glaring example of the misunderstanding between fair and equal is in progressive consequence organization. Does treating students fairly take more time? Here’s how to put this concept into practice. 1. 2. 3. "Johnny, please stop interrupting. As opposed to: "Bessie, you little weasel. 4.

6 signs of a natural leader Leadership is a skill that can be taught, but it also manifests itself in some people naturally. Recognizing this as a trait in yourself or others can sometimes be tricky — and it can cause misunderstandings about the natural leader’s character or intentions. A busy manager who has to deal with all kinds of personalities within a team can overlook signs of leadership and instead see someone being difficult — perhaps asking too many questions, questioning their direction or stepping on their toes when it comes to guiding other members of the team. While these behaviors can be initially challenging, they are all signs that the individual has the potential to be a great leader. Questioning. What to do next Once you’ve identified the early signs of a leader beginning to emerge within a team, it’s up to you to nurture this. Yes, it may be a challenge, and you will need conviction to back up your own leadership.

How We Got Here Updated:The FCC Tuesday voted 3:2 to approve an order that will enshrine the policies of network neutrality — the idea that ISPs can’t hinder or discriminate against lawful content flowing through their pipes — as regulations enforced by the commission. While legal challenges remain, and the text of the full order won’t be out for a few days, here’s the gist of what’s in store, as I explained last night: The order contains three sections that set policies around transparency, create a prohibition against blocking lawful content on wireline networks and certain types of content on wireless networks, and set up rules preventing unreasonable discrimination. More analysis will come later. Update: Here’s the release discussing the order, and the full order itself will come in a few days. As for how we got here, this is a brief recap of the events and decisions leading up to today’s vote: 2006: Congress attempts to pass the first of many network neutrality bills.

Cyber Bullying Statistics Cyber bullying statistics refers to Internet bullying. Cyber bullying is a form of teen violence that can do lasting harm to young people. Bullying statistics show that cyber bullying is a serious problem among teens. Cyber bullying affects many adolescents and teens on a daily basis. Sending mean messages or threats to a person’s email account or cell phoneSpreading rumors online or through textsPosting hurtful or threatening messages on social networking sites or web pagesStealing a person’s account information to break into their account and send damaging messagesPretending to be someone else online to hurt another personTaking unflattering pictures of a person and spreading them through cell phones or the InternetSexting, or circulating sexually suggestive pictures or messages about a person Cyber bullying can be very damaging to adolescents and teens. Many cyber bullies think that bullying others online is funny. Sources: i-SAFE Inc., “Cyber Bullying: Statistics and Tips” [online]

Visible Thinking VisibleThinking In Action Every committed educator wants better learning and more thoughtful students. Visible Thinking is a way of helping to achieve that without a separate ‘thinking skills' course or fixed lessons. Visible Thinking is a broad and flexible framework for enriching classroom learning in the content areas and fostering students' intellectual development at the same time. Here are some of its key goals: Deeper understanding of content Greater motivation for learning Development of learners' thinking and learning abilities. Toward achieving these goals, Visible Thinking involves several practices and resources. The idea of visible thinking helps to make concrete what a thoughtful classroom might look like. When the answers to questions like these are consistently yes, students are more likely to show interest and commitment as learning unfolds in the classroom. A bit about our research One important finding was that skills and abilities are not enough.

How Leadership Cross-Training Works By Jack Zenger, CEO, Zenger Folkman Most of us are familiar with the basic concept of cross-training. For example, a person who aspires to be a serious runner concludes that there are only a certain number of miles she can run per week. After reading magazines and talking to other accomplished runners, she decides to engage in a series of other activities such as weight lifting, bicycle riding, and swimming. Cross-training is an optimum solution for someone who is reasonably good at something and who wants to continue exceling at it and then move into the higher ranks in any given activity or sport. Correlations Between Competencies and Other Behaviors As we conducted our original research on leadership competencies, an interesting fact emerged. The Integration Effect As we began to understand the interplay of these competencies, we noticed there were strong interaction effects when leaders performed two competencies well. Why Companion Competencies Work A Final Thought