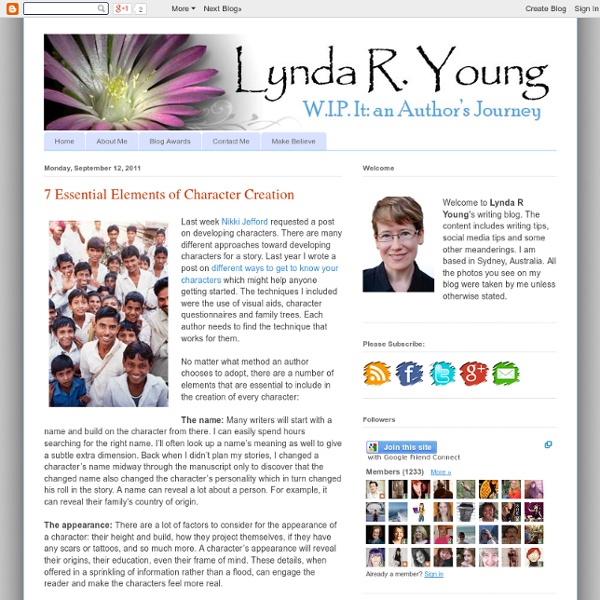 Last week Nikki Jefford requested a post on developing characters. There are many different approaches toward developing characters for a story. Last year I wrote a post on different ways to get to know your characters which might help anyone getting started. The techniques I included were the use of visual aids, character questionnaires and family trees. Each author needs to find the technique that works for them. No matter what method an author chooses to adopt, there are a number of elements that are essential to include in the creation of every character: The name: Many writers will start with a name and build on the character from there. The appearance: There are a lot of factors to consider for the appearance of a character: their height and build, how they project themselves, if they have any scars or tattoos, and so much more. The motivation: The easiest way I get to know my characters is to find out what drives them. --I was recently tagged by Tiffany Garner. Related:  dianemarycowan2

8 Ways to Write Better Characters The very first novel I, aged 20-something, wrote, is unpublished and will stay that way. An ensemble coming-of-age story of four teenagers, its weaknesses are legion: tame story line, thin action, unimaginatively rendered settings, hackneyed themes (though I will say the dialogue wasn’t bad). Having now published seven novels, I look back on that manuscript and realize that underlying the shortcomings I just mentioned lies its principal flaw: poor character development. The kids just don’t pop. So I’ve been pleased to read reviews of my latest novels (the Rita Farmer mysteries) that praise the characterization—and I’ve been struck by the number of them that cite the realism of my characters’ relationships. While plot is important, good characters can make or break your book. Let’s consider, to start, the categories of relationships we might write in our fiction: … and so many more. Everybody has relationships. Then, explore who they are beyond themselves. Here’s how. 1. 2. 3. No. 4. 5. 6.

Avoid Overactive or Inactive Supporting Characters One of the most common plot problems writers face is mistaking minor characters and subplots for the main character and primary plot. In the following excerpt, Joseph Bates, author of The Nighttime Novelist, discusses overactive or inactive characters and subplots and how they can impact your story. Overactive or Inactive Supporting Characters If in the second act you find your novel veering off course either because a minor character has come in and tried to run the place, or because your minor characters seem to be doing nothing but sitting on your couch, eating your food, not really contributing, you should put them to the test: determine why they’re there, if they can be brought in line somehow, or, if not, how you might excise them from the novel. If an inactive supporting character does indeed seem to fulfill some function like this—but is otherwise inert—you might see if another and better-established supporting character might fulfill that role just as easily. You might also like:

Where Should a Second Chapter Start? on October 12th, 2010 by Fiction Editor Beth Hill and last modified on October 12, 2010 We’ve all read advice about the first chapter—how and where to begin a story; what makes for strong openings, depending on the genre; what not to include in the first paragraph or page of chapter one; what to include in a novel’s opening. We understand that a good opening chapter sets the tone and introduces lead characters and gets the plot rolling. We know almost as much about the final chapter, the final paragraph, and the final words. About how to finish a story so that it’s complete and satisfying and induces the reader to want more. Yet, where’s the advice for chapter two? What do we do to move from that compelling first chapter—the one that’s seen more rewrites than all other pages combined and multiplied by 10—and into the meat of the story? We certainly want to continue the tone we’ve established. Sure there are. Where should a second chapter start? 1. 2.

The Most Important Things To Know About Your Character Quote from original Author(Beth):This list came about when, one day while struggling to develop a character for an upcoming Hunter game, my lovely roommate Nikki looked at me and said something like, "Wouldn't it be cool to have a list of questions you could go through and answer while you were making characters, so you'd make sure to consider all sorts of different elements in their personality?" I agreed, and that very evening we sat down over hot chocolate and ramen noodles to whip up a list of 100 appearance-, history-, and personality-related questions (which seemed like a nice even number) to answer as a relatively easy yet still in-depth character building exercise. Later on, we went through the list again, took out the questions that sucked (because there were a lot of them) and replaced them with better ones. In the more recent past, we've also found that answering those annoying online personality quizzes in-character can sometimes lead to interesting revelations. - Beth

Free English Grammar Lessons and Tests How to Pick Character Names: The 7 Rules of Choosing Names for Fictional Characters Choosing a character name for your novel is as pressure-filled as picking a name for a baby. It has to suit the character’s personality, makes sense for the era and, most important, be super awesome (sorry friends, the awesome name of Brian A. Klems is already taken by this guy). I stumbled upon these seven great rules for choosing character names offered up by popular mystery writer Elizabeth Sims (the Rita Farmer Mysteries). This guest post is by bestselling author and writing authority Elizabeth Sims. 1. It’s better to call a character Caleb, which means “faithful” or “faithful dog,” than to overkill it by naming him Loyal or Goodman—unless you want that for comic/ironic purposes. 2. If you need a name for an 18-year-old shopgirl in a corset store in 1930s Atlanta, you know enough not to choose Sierra or Courtney, unless such an unusual name is part of your story. 3. Your novel might become an audiobook or an e-book with text-to-speech enabled. 4. 5. 6. 7.

Show, Don't (Just) Tell (Dennis G. Jerz, Seton Hill University) Characters With Conflict & Backstory Seven Steps To Creating Characters That Write Themselves Creating characters that are believable takes time and discipline. Creating dynamically real individuals and not imposing your own thoughts and impressions upon them is not easy to do, and is often the difference between a novel or screenplay that sits in a closet and one that finds its way around town and into the hands of audiences. Spending your time building your characters before they enter the world of your story makes the process of writing an easier and more enjoyable ride, and creates a finished product that agents, publishers, producers and readers can truly be excited by. You must first agree to operate from the understanding that the three-dimensionality of your characters is not created magically. The complexity that you desire comes through: 1. The first key to deepening your work is finding the major motivators in the lives of your characters that drive their actions. 2. 3. 4. 5. Emotions are extreme. 6. 7.

Patricia C. Wrede's Worldbuilder Questions: Index Index About This Page This page is not Patricia Wrede's web site. So far as I know, she doesn't have one. So if something is broken send your comments or complaints to me: webmaster@larseighner.com. This page is not for young fans of Patricia C. This page is about creating fantasy worlds. This page (actually the many pages in this section) are derived of a number of postings Ms. Originally the questions did not have the sort-of-alphabetic arrangement I have given them here. I put the questions on the web many years ago and obtained Ms. The implications of all of that are: these pages have no connection with any software product, any building-block toys, game creation system, or any other product which uses the word "Worldbuilder" as a trademark. Index of Patricia C.

Where to Find Ideas for Writing a Story Ideas for writing a story It always seem like there are too many writing ideas or not enough. When you don’t have time to write, ideas come hurtling out of nowhere. Chances are, you’re not really out of ideas; you’re just not in the mood to write. Luckily, ideas for writing a story are all around you. 1. 2. 3. 4. 5. 6. 7. 8. 9. 10. What kind of stories do you write? About Melissa DonovanMelissa Donovan is a website designer and copywriter. Secrets and Lies for Your Characters Nothing is better (or more fun for the writer) than a story-relevant secret or lie. Give some dilemma beneath the surface story to give your character depth, add suspense and tension, and keep your reader turning the pages. You can drop hints throughout your writing and when the reveal comes—you will surprise, shock, and delight your reader. Creating a character with a strong internal conflict, secret, or burden makes for one compelling read! (To see more on writing a compelling protagonist, check out The Compelling Protagonist Part 1 and Compelling Protagonist Part 2.) It’s vital to have conflict in every scene, and when the action is quiet in your book, internal conflict will keep a reader turning the pages. Below are writing prompts to help you find some ideas for internal secrets, lies (and therefore conflict) for your characters. Write about a broken promise. Write about a secret. Write about a lie that protects. Write about a lie that is told to hurt.