Photos Page 1. Untitled. Just a bit of info about my World of Warcraft satyr costume for Otakon 2010! This isn't really a step-by-step guide so much as a "how the devil did she do that? " documentary ;> As such, there is a LOT of work and parts that I have not included. I'll be happy to answer any questions, though, so feel free ask away.

The Stilts The stilts were what started it all. Browsing youtube one day, I came across this video by gryphern and had to make some. The stilts I created were modified slightly to make the more suitable for hooves versus the original paw design. They put the foot at about a 45° angle, and add a significant amount of height, and are heavy! I wanted the fur on the legs to be a bit more form-fitting than the original video, so I made duct tape dummies of both stilts. Hooves/Horns I used a handy tutorial by houseofdarkly as model for my horns and hooves. Tail Figuring out the tail was the hardest part. Making the Satyr. As I mentioned in my last post, my brother and I are planning on making a satyr/faun (both words and interchangeable) costume for him. 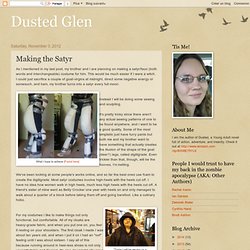 This would be much easier if I were a witch. I could just sacrifice a couple of goat-virgins at midnight, direct some negative energy or somesuch, and bam, my brother turns into a satyr every full moon. ﻿ ﻿﻿﻿﻿ Cloven hooves. These are pretty easy to make hooves, from stuff i found around my house.they are cloven [have a split down the middle] because i made these to go with my faun[or satyr] costume.this is step two in my satyr costume making.the first step[ram horns] can be found here: anyways, all you need is:1)some ugly high heels [mine are four-inchers]2)poweredrill and 6-8 screws3)saw [circular or otherwise]4)a 4-by-4 peice of wood[you decide the length]5)sanding skills/sander.6)some elastic. they may look kinda silly when they are done, but not to worry, they will look professionally badass when you get furry pants to go over the shoe. 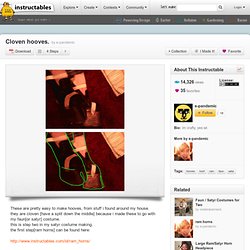 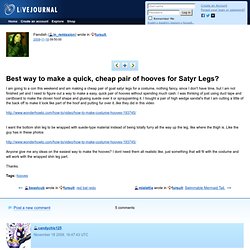 I was thinking of just using duct tape and cardboard to make the cloven hoof shape and glueing suede over it or spraypainting it. I bought a pair of high wedge sandal's that I am cutting a little of the back off to make it look like part of the hoof and putting fur over it..like they did in this video I want the bottom shin leg to be wrapped with suede-type material instead of being totally furry all the way up the leg, like where the thigh is.

Like the guy has in these photos Anyone give me any ideas on the easiest way to make the hooves? Thanks. Fursuit: Digitigrade leg shaping tutorial. Making costume hooves, fit for a faun. Matrices.net. Creating a Digitigrade illusion for your character's legs So you want your character to have the illusion of digitigrade locomotion, so it appears to be walking on its toes? 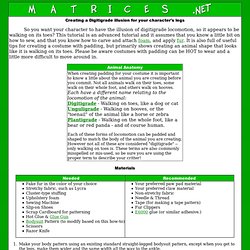 This tutorial is an advanced tutorial and it assumes that you know a little bit on how to sew, and that you know how to carve and attach foam, and apply fur. It is also full of useful tips for creating a costume with padding, but primarily shows creating an animal shape that looks like it is walking on its toes. Please be aware costumes with padding can be HOT to wear and a little more difficult to move around in. Materials Make your body pattern using an existing standard straight-legged bodysuit pattern, except when you get to the legs, make them wider and the same width all the way to the ankle. Digitgrade Legs and Hoves. DIGIGRADE HOOVES CHEAP lol by *ProtoCall13o2 on deviantART. 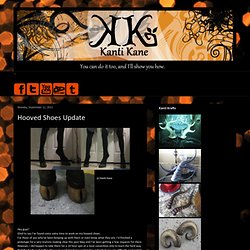 Glad to say I've found some extra time to work on my hooved shoes.For those of you who've been keeping up with them or even know what they are, I'd finished a prototype for a very realistic-looking shoe this past May and I've been getting a few requests for them. However, I did happen to take them for a 14 hour spin at a local convention only to learn the hard way that the hoof used in this shoe is muuuch too heavy and makes extended use very difficult, so I've told a few people that I'd rework them with a lighter and more durable hoof. Well, I've finally begun to work on the new pair and things are looking good so far! I will now have "male" and "female" hooves, which are really not so different from each other, other than size. The male hooves are about 1" longer and .5" wider than the female pair, allowing them to support a larger shoe size and also to make balance much easier for smaller shoes. Make Your Own Pony Hooves.