3 Steps to Writing a Novel with Unforgettable Characters 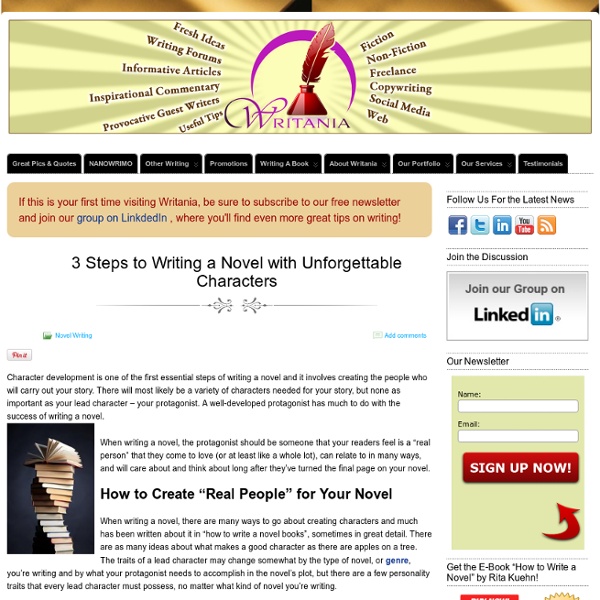 Character development is one of the first essential steps of writing a novel and it involves creating the people who will carry out your story. There will most likely be a variety of characters needed for your story, but none as important as your lead character – your protagonist. A well-developed protagonist has much to do with the success of writing a novel. When writing a novel, the protagonist should be someone that your readers feel is a “real person” that they come to love (or at least like a whole lot), can relate to in many ways, and will care about and think about long after they’ve turned the final page on your novel. How to Create “Real People” for Your Novel When writing a novel, there are many ways to go about creating characters and much has been written about it in “how to write a novel books”, sometimes in great detail. Writing a Novel – Four Attributes of a Lead Character: 1. 2. 3. 4. Writing a Novel – Three Attributes Every Character Has: 1. 2. 3. 1. 2. 3.

How to Write a Flat Character Arc, Pt. 1: The First Act Next to the positive change arc, the flat character arc is the most popular storyline. Also called the “testing arc,” the flat arc is about a character who does not change. He already has the Truth figured out in the beginning of the story, and he uses that Truth to help him overcome various external tests. The flat-arc protagonist will be confronted with tremendous opposition. Alignments, Allegiances, and Loyalties So, you want to write about a villain who stops being so villainous, and perhaps even becomes a hero? Or do you want to write about a hero who becomes more of a "dark" hero, or even an outright villain? Or a character who just plain switches sides? This is a subject that is often handled badly, with the character progression coming off as forced and contrived. So, here are some tips that should help you write a more plausible shift, whether you're writing an OC for a roleplay or fanfiction or a character for an original work.

How to Write a Synopsis of Your Novel by Glen C. Strathy* To sell your novel, you may need to know how to write a synopsis, even if you are a pantser-type novelist who can write a whole novel without making an outline first. Cheat Sheets for Writing Body Language Translate emotions into written body language We are always told to use body language in our writing. Sometimes, it's easier said than written. I decided to create these cheat sheets to help you show a character's state of mind. Obviously, a character may exhibit a number of these behaviours.

Plotting, Conniving, and Manipulating Plotters, connivers, and manipulators are a popular character archetype, showing up as villains and heroes alike. The recent Doctors. Loki. Batman. Rumplestiltskin. They're absolutely amazing to see when they're done right... but unfortunately, many people don't do them right, often due to misconceptions of how the process actually works.

Writing Tips - Publishers list of phrases for writers to avoid We have all met people who have the extraordinary ability to talk in clichés: Y’know, not to beat around the bush or hedge your bet, this section is a must-read because it calls a spade a spade and in a nutshell leaves no stone unturned to pull the rug from under those off-the-cuff, old-hat bête noires called clichés. These are the people who’ve given the cliché its bad name. We all tend to use them, of course. Writing Killer Fight Scenes Fight scenes are dangerous territory for writers. On the surface, they seem as if they’re guaranteed to keep the reader glued to the action in the same way as they often do at the movies. In reality, though, readers tend to skip over fight scenes – skimming the long, tedious, blow-by-blow descriptions in favour of getting back to the dialogue and character-driven drama that truly engages them in the story. My novel, Traitor’s Blade, is a swashbuckling fantasy in which fight scenes are a crucial part of the storytelling. This means having to ensure that every piece of action is vital and engaging; it means that every duel must draw the reader in and not let them go until the end. So how do you keep the pacing, flow, and more importantly, the drama moving forward with so many fights?

Improve Your Character Writing Look through the eyes of the opposition. By now, you’re probably used to seeing the world through the eyes of your protagonist. Now, try seeing the world and your protagonist through the eyes of characters who disagree with or even outright hate your protagonist. Get in-character as these characters for awhile and grok the world from their POV for awhile. Eight Secrets Which Writers Won’t Tell You Image from Flickr by Lazurite This is not particularly relevant to the post, but I’m getting an awful lot of comments telling me, often a little snarkily, “it’s ‘THAT’ not ‘WHICH’”. The “don’t use which for restrictive clauses” rule comes (as far as I can tell) from Strunk and White. Plenty of authors, including Austen, have used “which” exactly as I use it in the title. It’s very commonly used like this here in England, so I’m guessing my comments are coming from US readers.

20 Best Websites To Download Free EBooks We understand that reading is the simplest way for human to derive and constructing meaning in order to gain a particular knowledge from a source. This tendency has been digitized when books evolve into digital media equivalent – E-Books. It would be nice if we’re able to download free e-book and take it with us. That’s why we’ve again crawled deep into the Internet to compile this list of 20 places to download free e-books for your use. Great Websites to Download Ebooks Write Better Ensemble Casts Another fine article contributed by J. Avoid homogeny, if possible. It's all too easy to create an entire group of characters who are almost just alike. Whether they're the same race/species or just have the same main interest, they often come out as cookie-cutter clones.

20 Common Grammar Mistakes That (Almost) Everyone Makes I’ve edited a monthly magazine for more than six years, and it’s a job that’s come with more frustration than reward. If there’s one thing I am grateful for — and it sure isn’t the pay — it’s that my work has allowed endless time to hone my craft to Louis Skolnick levels of grammar geekery. As someone who slings red ink for a living, let me tell you: grammar is an ultra-micro component in the larger picture; it lies somewhere in the final steps of the editing trail; and as such it’s an overrated quasi-irrelevancy in the creative process, perpetuated into importance primarily by bitter nerds who accumulate tweed jackets and crippling inferiority complexes. But experience has also taught me that readers, for better or worse, will approach your work with a jaundiced eye and an itch to judge. While your grammar shouldn’t be a reflection of your creative powers or writing abilities, let’s face it — it usually is.