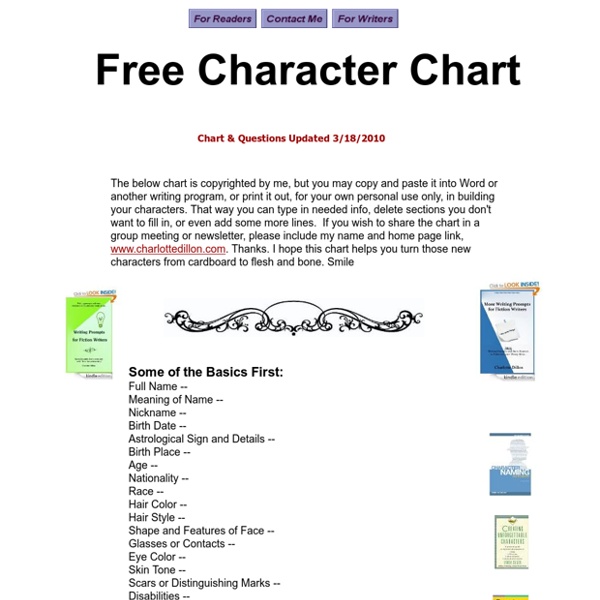 a) If you could have two whole weeks for vacation and go and do anything you wanted, what and where would it be? b) If you had a weakness for one of the seven deadly sins, which one would it be and why? (pride, greed, lust, envy, gluttony, wrath, sloth) c) If you could bring one person back to life and spend a whole day with him or her, who would it be and why? d) If you won a three-million dollar lottery, what would you do with the money? What would you do with a five-hundred dollar win? e) If you could change one thing about yourself, what would it be? f) What do you do to relax after a bad day? g) Where would you go to hang out if you wanted to feel comfortable? h) What do you do when you are angry? i) Do you have a secret passion? j) How do you feel in a crowd? k) If you were asked to describe yourself, what would you say about the kind of person you are? l) Where do you want to be in your life ten years from now? m) A tear jerker is on. o) What do you think would make a perfect first date?

omg.yahoo.com/photos/top-shots-of-the-week-may-28-2013-slideshow/ YOU ON omg! Your Activity | Social: OFF ON Turn Social ON Remind me when I share | Options What is this? Not you? Log out of Facebook How to remove this experience Top Shots of the Week: May 28, 2013 Miss any of the most memorable celebrity moments of the week so far?

Journalism 101 - What Bloggers Need to Know Blogging Published on December 12th, 2012 | by Colleen Corkery The blogger vs. journalist debate has been a heated topic for years. Bloggers are influential, educational and informative, but some believe (including an Oregon court) blogging doesn’t equate to journalism, hence bloggers aren’t considered by some as completely legitimate resources. However, with the influx and influence of blogs, several traditional news media outlets, including The New York Times, have adapted and taken on a more blog stylistic approach. This year, The Huffington Post (considered a blog) won a Pulitzer Prize, which is typically awarded for “achievements in newspaper and online journalism.”

10 Coolest Kids Room Themes Kids’ rooms are fun to design because you get to stretch your imagination, and really run with a theme. If you’re thinking about decorating your child’s room, check out these fantastic theme designs. Trés Chic This stunning kid’s room uses bold complimentary colors against a stark white backdrop. While the design is crisp and neat, it also has a fair amount of whimsy that would make it appealing to kids. The brightly printed pillows and the zebra rug add definite flair and texture to the room.

Character Chart for Fiction Writers - EpiGuide.com If you're a fiction writer -- whether you're working on a novel, short story, screenplay, television series, play, web series, webserial, or blog-based fiction -- your characters should come alive for your reader or audience. The highly detailed chart below will help writers develop fictional characters who are believable, captivating, and unique. Print this page to complete the form for each main character you create. IMPORTANT: Note that all fields are optional and should be used simply as a guide; character charts should inspire you to think about your character in new ways, rather than constrain your writing. Fill in only as much info as you choose. The Thirty-Six Dramatic Situations The Thirty-Six Dramatic Situations is a descriptive list which was created by Georges Polti to categorize every dramatic situation that might occur in a story or performance. To do this Polti analyzed classical Greek texts, plus classical and contemporaneous French works. He also analyzed a handful of non-French authors. In his introduction, Polti claims to be continuing the work of Carlo Gozzi, who also identified 36 situations. Publication history[edit] “Gozzi maintained that there can be but thirty-six tragic situations.

Lichtenberg Figures: The Fractal Patterns of Lightning Strike Scars Mar 10, 2012 Being struck by lightning is a dangerous and scary experience and can even be fatal. Sometimes, the electrical discharge can leave a tattoo-like marking or scar known as a Lichtenberg figure. The patterns created are known to be examples of fractals. Lichtenberg figures are branching electric discharges that sometimes appear on the surface or the interior of insulating materials. They are named after the German physicist Georg Christoph Lichtenberg, who originally discovered and studied them. Writer's Resource Center Writing exercises are a great way to increase your writing skills and generate new ideas. They give you perspective and help you break free from old patterns and crutches. To grow as a writer, you need to sometimes write without the expectation of publication or worry about who will read your work. Don’t fear imperfection. That is what practice is for. Pick ten people you know and write a one-sentence description for each of them.

Liquid to Light! Designer Ed Chew takes a green step in the right direction with the TetraBox lamp, a light object made from discarded drink packets that would have otherwise ended up in landfills already packed to the brim. The design is achieved by unfolding the packets and refolding them into hexagonal and pentagonal sections that are then pieced together to form a geodesic sphere or any other desired shape. Here, the Epcot-like ball makes an attractive overhead light and casts an impressive web of shadows and shapes on the surrounding space. Hook Your Readers With Tension Hook Your Readers With Tension By Laura Backes, Write4Kids.com Tension. Without it, life would be—let's face it—boring. So would fiction. Tension works with conflict to raise the emotional level of the text to a boiling point. It forces the reader to become invested in the story.

Exclusive: Johnny Depp Takes a Scary Fall Off His Horse While Shooting 'The Lone Ranger' | Movie Talk Un-trusty steed: Johnny Depp took a bad spill while filming 'The Lone Ranger' (Photo: Walt Disney Pictures) Whoa, Scout, whoa! Witnessing actors brave great heights, explosions and other death-defying stunts is usually rather awe-inspiring. 25 Questions that Provoke Thought I’m going to answer your questions because no one else did. 1. I dont, I live my life. 2. How To Draw Hands Tutorials So everybody knows that the hands and the fingers are one of the hardest things to draw. So here is a personal collection of different hand references, hope to enjoy it and never stop practice. Hogarth hand poses from Iron Giant (middle of page) Mickey Mouse Hand Model Sheet by Les Clark ca. 1932 Merlin hand poses via Deja View Hand drawing tut by uchuucacahuate on deviantart.

One Sentence - True stories, told in one sentence. Louisreility We left for a two week holiday to see a few concerts in California and ended up three months later in a hostel in Guatemala city looking at a map, eating frozen chocolate bananas and asking each other if we knew where we were. tags: travel surprise [add] 2014-03-03 09:20:39 / Rating: 322.5 / Robert One of the saddest things I've ever saw was a little bird that had frozen to death perched on a tree branch alone.