12 Events That Will Change Everything, Made Interactive 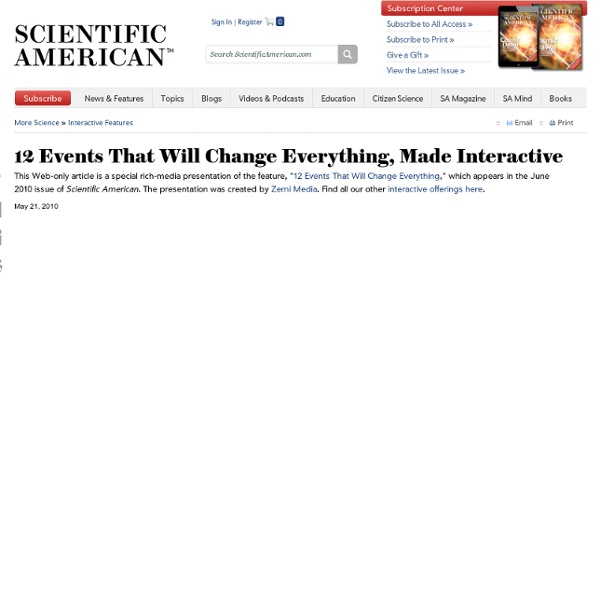 Exoplanets An interactive version of XKCD 1071: Exoplanets using data from Planetary Habilitability Laboratory (via @ProfAbelMendez) and adapted code from the d3.js Bubble Chart example (by @mbostock). Planets are drawn to scale using radius data. The dataset also includes attributes such as atmosphere type, which is included in the information area on the left. The dataset is large (about 1.1mb), so it may take a few seconds to load. 7 cultural concepts we don't have in the U.S. From the end of October through the New Year and onto Valentine's Day, it's easy to forget that the holidays we celebrate are simply cultural constructs that we can choose to engage in — or not. The concepts and ideas we celebrate — like our spiritual beliefs and daily habits — are a choice, though sometimes it feels like we "have" to celebrate them, even if we don't feel like it. Culture is ours to do with as we choose, and that means that we can add, subtract, or edit celebrations or holidays as we see fit — because you and me and everyone reading this makes up our culture, and it is defined by us, for us, after all. If you want to add a new and different perspective to your life, there are plenty of other ways to recognize joy and beauty outside American traditions. Friluftsliv

Scientific Proof that Galactic Energies Have Triggered Worldwide Consciousness Expansion New energy from the galactic center is raising consciousness, which is triggering an upgrade to our DNA. On Coast to Coast AM, scientist David Sereda provided evidence that our Solar System entered a new field of cosmic energy that set off a chain of events including the vibration of the entire planet, the largest storm ever recorded on Saturn, and an early sunrise in Greenland (related to a wobble of the Earth and magnetic pole movement). The sequence of events began the day after the combined Winter Solstice and total lunar eclipse on December 21, 2010 – exactly two years to the day before the end of the Mayan calendar. On Dec 22, 2010, one day after the Winter Solstice/total lunar eclipse, earthquake sensors all over the planet all went off at the same time with full signal strength. According to Sereda, this was not an earthquake – the entire planet vibrated. On Dec 23, 2010 NASA reported that the largest storm ever recorded on Saturn erupted and is still going on today.

Tesla - Master of Lightning: A Weapon to End War Tesla inherited from his father a deep hatred of war. Throughout his life, he sought a technological way to end warfare. He thought that war could be converted into, "a mere spectacle of machines." In 1931 Tesla announced to reporters at a press conference that he was on the verge of discovering an entirely new source of energy. Asked to explain the nature of the power, he replied, "The idea first came upon me as a tremendous shock... Oblong Has Built The Future Of Computing. I’ve Seen It. Used It. It’s Beautiful. “This is the next Macintosh-level of disruption.” Over the past several years, I’ve followed pretty much every new thing in the technology space, and written about many of them. But it’s hard not to get cynical when so much of what’s out there is not only not revolutionary, it’s often not even evolutionary. Instead, much of what I see is simply derivative and quite frankly, boring.

Eyes on the Solar System Explore theSolar System Start exploring our Solar System like never before with the Launch button, or jump into a module about a mission or spaceflight technology. Travel with Voyager at the edge of our solar system, land on Mars with Curiosity, learn about the power systems behind Curiosity, Voyager and other missions or fly with Juno to the giant planet Jupiter. Worlds Most Isolated Tribe – Enter Their Mysterious Island & They’ll Kill You! Introducing the Sentinelese people. They’ve been kicking around this beautiful island for a whopping 60,000 years. They inhabit a tiny island in The Indian Ocean which is estimated to be approximately the size of Manhattan. From the sky it appears to be an idyllic island with amazing beaches and a dense forest, but tourists or fishermen don’t dare to set foot on this island, due to its inhabitants’ fearsome reputation. When outsiders approach their island, they swarm the shoreline and rain down arrows.

Have we found the universe that existed before the Big Bang? First of all, let me say that this is not a comment on the overall article, but a small portion of it included below. I stopped reading at the line "it's not clear whether one can even use the term "before" in reference to a pre-Big-Bang cosmos, as time itself may not have existed yet" There is no such thing as "time" as we see it. Time is not something that exists because time is an entirely human created notion. The Age Of Relevance Editor’s note: This is a guest post submitted by Mahendra Palsule, who has worked as an Editor at Techmeme since 2009. Apart from curating tech news, he likes analyzing trends in startups and the social web. He is based in Pune, India, and you can follow him on Twitter. What’s the Next Big Thing after social networking? This has been a favorite topic of much speculation among tech enthusiasts for many years. I think we are already witnessing a paradigm shift – a move away from simple social sharing towards personalized, relevant content.

Birth of the Moon Posted by admin on Saturday, February 11, 2012 · The latest episode of Cosmic Journeys, enjoy in full HD 1080p. Scientists have been reconstructing the history of the moon by scouring its surface, mapping its mountains and craters, and probing its interior. What are they learning about our own planet’s beginnings? Is Jupiter Undergoing Massive Climate Change? A Weekend Feature The Hubble Space Telescope and Keck Observatory images may support the idea that Jupiter is in the midst of violent global climate change. This theory was first proposed in 2004 by Phil Marcus, a professor of mechanical engineering at the University of California, Berkeley. The planet's temperatures may be changing by 15 to 20 degrees Fahrenheit, with the giant planet getting warmer near the equator and cooler near the South Pole. Marcus predicted that large changes would start in the southern hemisphere around 2006, causing the jet streams to become unstable and spawn new vortices as has been proven out by the emergence of new swirling red storms. Jupiter's atmosphere has a zig-zag pattern of twelve jet streams which make up its signature pastel-toned bands.

Dawn of a New Day « Ray Ozzie To: Executive Staff and direct reports Date: October 28, 2010 From: Ray Ozzie Subject: Dawn of a New Day Five years ago, having only recently arrived at the company, I wrote The Internet Services Disruption in order to kick off a major change management process across the company. In the opening section of that memo, I noted that about every five years our industry experiences what appears to be an inflection point that results in great turbulence and change. In the wake of that memo, the last five years has been a time of great transformation for Microsoft. At this point we’re truly all in with regard to services.

Astronomers: A Galaxy of Dark Matter Orbits the Milky Way People used to think that the heavens were a vast clockwork, with planets and moons moving in circular orbits like a vast timepiece. Recent advances have shown us that this stellar machinery is far vaster than they ever suspected - even our galaxy has satellites, mini-galaxies orbiting the Milky Way and some of them could be very interesting indeed. We now know about two dozen of these satellite galaxies. One of the most recent is "Segue 1", uncovered by the Sloan Digital Sky Survey (SDSS), whose extremely low light-to-mass ratio makes it a particularly significant cosmic find. Despite having a mass of a million suns it is nowhere near as luminous as astronomers would expect, with only a couple of hundred stars visible.

The Future of the Internet Advertisement “In only a few short years, electronic computing systems have been invented and improved at a tremendous rate. But computers did not ‘just grow.’