Science past and future

What You Don't Know About History's Most Famous Scientists. It's easy to take the wonders of modern science—gene technology, particle physics, robotics—for granted. 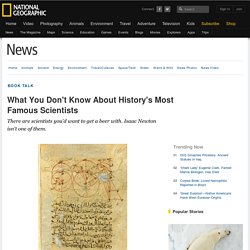 But it took a long, hard road of experiment and discovery—and failure—to make these leaps. In his new book, To Explain the World: The Discovery of Modern Science, Nobel Prize-winning theoretical physicist Steven Weinberg tells the inspiring story of science's greats and the obstacles that stood in their way. Courtesy of HarperCollins Talking from his home in Austin, Texas, Weinberg explains how the scientific revolution in Europe laid the foundations for today's science, why he watches old movies while he's doing physics, how religion has influenced Islamic science, and why joy is ultimately what drives science forward. You say this is a book about how we came to learn how to learn. Scientists today learn about nature by doing experiments and making observations. Here Are All The Crazy Ways Humans Are Changing Nature.

A new photo series titled "A Guide to the Flora and Fauna of the World" documents the ways humans are changing the natural world. 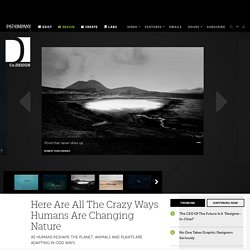 Shot and edited by Robert Zhao Renhui, whose work explores the ethics and morality of man's relationship to nature, the images catalogue how animals and organisms evolve in response to the modern world. On view at the Centre for Contemporary Photography in Melbourne, Australia, the series features both human-engineered changes—like fake meat—and some mutations that have occurred in the wild as the result of human activity—like a beetle with three eyes.

Largely, the changes are the result of human intervention, though. There are cube-shaped apples (bred to be easier to store on grocery shelves) and rhinos whose horns have been removed by wildlife conservationists to deter poachers; and a wild tiger who's been fitted with a kill switch around its neck to be activated if it shows too much interest in getting near humans. Curiosity Cabinet. Over the past 25 years I have accumulated a collection of various gizmos, devices, toys etc. which to me are excellent examples of scientific principles or things that you look at and you say "That's impossible! 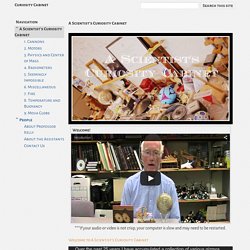 " except it's staring you in the face. In the hope that others may also find them interesting and with the help of two undergraduates, Jacy Lundberg and Omar Khan, we have created videos of many of the items in the collection. In many cases we have tried to include explanations of how they work or references to where one can find this information. Jacy and Omar are currently seniors in the Boston College pre-medical program. Omar is from Portland, Oregon and Jacy is from Los Angeles, California. In the olden days some people assembled what were known as curiosity cabinets. The Discovery of Photosynthesis. Who Discovered Photosynthesis? 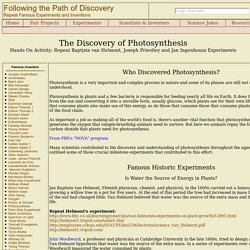 Photosynthesis is a very important and complex process in nature and some of its phases are still not completely understood. Photosynthesis in plants and a few bacteria is responsible for feeding nearly all life on Earth. It does this by taking energy from the sun and converting it into a storable form, usually glucose, which plants use for their own life processes. Animals that consume plants also make use of this energy, as do those that consume those that consume plants, and so on to the top of the food chain. As important a job as making all of the world's food is, there's another vital function that photosynthesis performs: It generates the oxygen that oxygen-breathing animals need to survive. 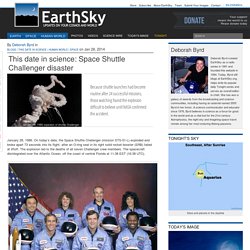 On today’s date, the Space Shuttle Challenger (mission STS-51-L) exploded and broke apart 73 seconds into its flight, after an O-ring seal in its right solid rocket booster (SRB) failed at liftoff. The explosion led to the deaths of all seven Challenger crew members. The spacecraft disintegrated over the Atlantic Ocean, off the coast of central Florida at 11:38 EST (16:38 UTC). 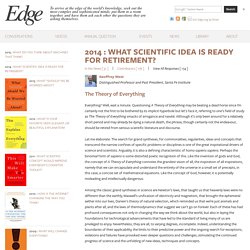 Our species could have science at the speed of thought—science at the speed of inference. But too often we run into Planck's demographic limit on the speed of science—funeral by funeral, with each tock of advancement clocked to the half-century tick of gatekeepers' professional lifespans. In contrast, the natural clock rate of science at the speed of thought is the flash rate at which individual minds, voluntarily woven into mutually invigorating communities by intense curiosity, can draw and share sequences of strong inferences from data. Indeed, Planck was a giddy optimist, because scientists—like other humans—form coalitional group identities where adherence to group-celebrating beliefs (e.g., we have it basically right) are strongly moralized.