Fastcodesign. The sound of a word like "knife" or "truck" seems totally arbitrary—it’s just a random sound we’ve assigned to a thing, right? 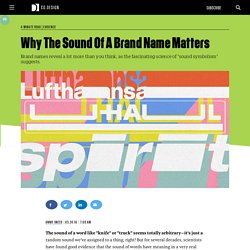 But for several decades, scientists have found good evidence that the sound of words have meaning in a very real way. Sound can convey subtle information about traits such as size, shape, smoothness, and also, according to a new study in Cognition, distance. This suggests that while the sound of company and product names—Lyft, Smuckers, Nike—may seem meaningless, it may actually quietly shape consumers' perceptions. Fastcodesign. Lyndon Neri, cofounder with his wife and fellow architect Rossana Hu of the prolific Shanghai-based multidisciplinary design firm Neri & Hu, has felt depressed for the past couple of years. 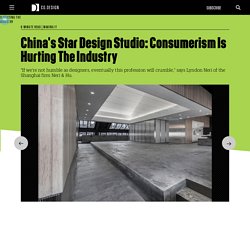 But in a seemingly contradictory way, it excites him. "I see a number of our friends who have done amazing work and I look at it and it's like, 'Oh! I should have been the one who thought of that,'" Neri says. "I look at Konstantin Grcic's work and Naoto Fukasawa, and the Bouroullec Brothers and it continually impresses us. I turn to Rossana and say, 'Wow, we suck.'"

What Architects Make When They Play With Lego. Many kids who grow up to be architects get their start with Lego, but how do architects play with Lego when they're not kids any more? 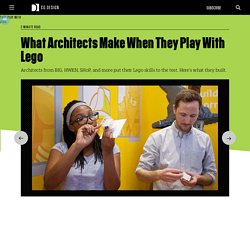 To find out, the Lego Store in New York's Flatiron District, in collaboration with Architizer, recently held an event. There, they teamed architects from BIG, SHoP, HWKN, and Bernheimer Architects with students from Manhattan's Urban Assembly School of Design and Construction to create a new New York out of monochrome Lego blocks, unbounded by pesky budgets and zoning laws. The scale of the projects that came out of the event ranged from "mere" skyscrapers to entire cityscapes. Fastcodesign. Las reglas del buen olor. Las reglas del buen olor. What Happened When I Tried To Declutter My Brain. As a designer whose goal in life is to make information easy to ingest, I am acutely aware of the burden of having too much information. 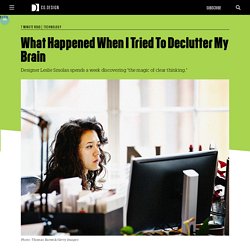 So when I heard Manoush Zomorodi, host of the tech show Note to Self on WNYC, announce that she was tackling this very topic, I decided I was in. "Infomagical" is an audience engagement and podcast series that looks at the consequences of FOMO (fear of missing out) and information overload on our brains. It's designed to help people "find focus and discover the magic of clear thinking. " Amid the deluge of information coming at me each day, I'm constantly struggling to decide what's important and what to ignore. Paraphrasing Tool - Free Online Text Rewriting Tool. Fastcodesign. Toca Hair Salon is one of the most popular apps from Toca Boca, the kids' app developer with offices in Stockholm, New York, and San Francisco. 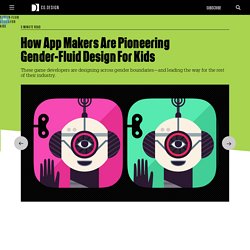 Set within a lively, candy-colored hair salon, it’s a game of endless and ever-morphing style options. Hair can be shaved off in one second, then grown back out the next. Fastcodesign. You know that nervous feeling you get when you recommend something to clients? 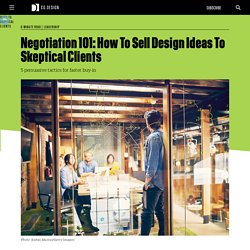 It’s because you know they’re going to wonder why, and you’re going to have to spit out some sort of explanation. And you're going to stutter through it with meaningless phrases: "That’s how it’s usually done. " "I think this is the way to go. " COOK ME – BLACK BILE - REVITAL COHEN & TUUR VAN BALEN. Synthetic biology can give detailed insight into our metabolic processes and introduce new interactions with our body. 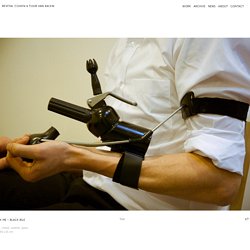 This work proposes these interactions as a new form of cooking, to tailor an emotional experience for a specific person at a specific time. Cook Me – Black Bile proposes a recipe for controlling the feeling of melancholy. Using synthetic biology, bespoke yeasts are designed that measure chemicals in the blood and alter levels of serotonin accordingly, making one feel less or more melancholic. To do so, the dish is cooked from a leech that has first fed itself on the body. An instrument specially designed for this recipe allows the leech to feed on the forearm and is then used to cook a blood mousse from the parasite’s body.

Naomi Kizhner's Parasitic Powered Jewelry. The ‘e-pulse conductor’ is a pendant without a chain, harvesting bioelectricity from the human body's neurological system, "plugged" into the spine via pincer interface. 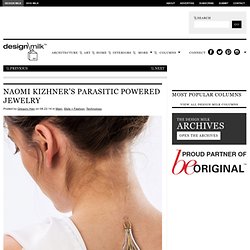 In the dystopian future of The Matrix, humanity has been converted into a renewable crop by energy-starved sentient machines, with “farms” of human bodies harnessed and harvested for their metabolic output. It’s one of those disturbing sci-fi premises which can leave one suspicious of artificial intelligence, robotic vacuums, and the whole “internet of things” trend. But maybe Agent Smith and his robotic compatriots were onto something in regards to the human body as a renewable energy source. Industrial design graduate student, Naomi Kizhner of Jerusalem’s Hadassah College envisions jewelry one day serving purposes beyond adornment, a three-piece collection connecting and converting the human body into one gigantic battery for biological data feedback.

Susana Soares: Bee's. EGGO - Light for Your Life on Behance. 2013 Day 1 – The Paradox of Design in Medicine and Inspiration from Seventy-Two Thousand Nadis. By Mike Moore, Medgadget We’re here at TEDMED 2013, excited to be part of a unique group of people passionate about the future of medicine and curious to walk the path that will take us there. 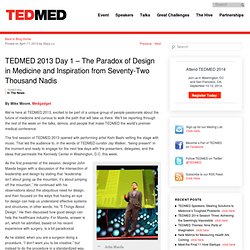 We’ll be reporting through the rest of the week on the talks, demos, and people that make TEDMED the world’s premier medical conference.