Controlling Computers with Your Mind 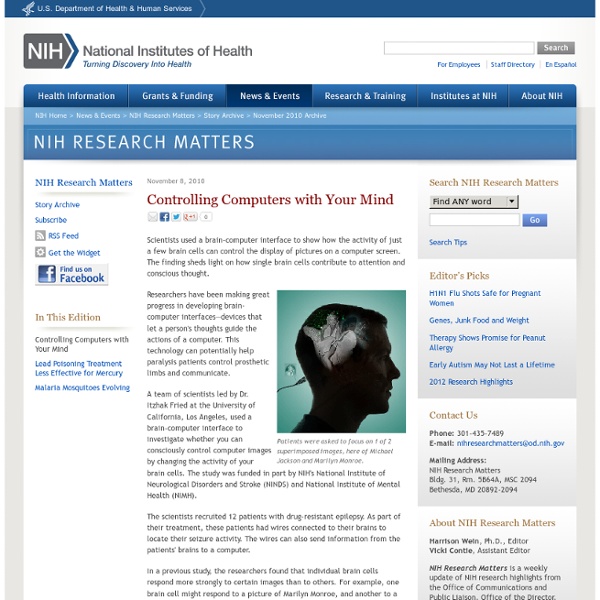 November 8, 2010 Scientists used a brain-computer interface to show how the activity of just a few brain cells can control the display of pictures on a computer screen. The finding sheds light on how single brain cells contribute to attention and conscious thought. Patients were asked to focus on 1 of 2 superimposed images, here of Michael Jackson and Marilyn Monroe. Researchers have been making great progress in developing brain-computer interfaces—devices that let a person's thoughts guide the actions of a computer. A team of scientists led by Dr. The scientists recruited 12 patients with drug-resistant epilepsy. In a previous study, the researchers found that individual brain cells respond more strongly to certain images than to others. For this study, the scientists first identified neurons in each person that responded selectively to 4 different images. The results appeared in the October 28, 2010, issue of Nature. Related:  Module 4: Screen Time and the Developing Brain

Navy: Grow Sailors’ Brains With iPhone App | Danger Room It’s not that the Navy is calling you stupid. The seafaring service just wants to actually see your brain grow. High on the Navy’s just-released wish list for designs from small businesses is a “brain-fitness training program” that sailors can use to sharpen their cognitive skills. It’s got to work on an “ultramobile platform” like an iPhone or a netbook. According to a solicitation released yesterday, the Navy wants it to produce measurable improvements in “working memory, attention, language processing and decision making,” not just in “new recruits” but aging captains, admirals and senior enlisteds. Think of it like a souped-up adult education app. Any business that wants the Navy’s cash must demonstrate that its learning program will actually change sailors’ brains. What “growth” in this context actually means is a faster brain, where synapses fire electrical impulses more rapidly in response to stimuli. But it’s far from clear how it would work. Image: Wikimedia See Also:

Nerve-Electronic Hybrid Could Meld Mind and Machine | Wired Science Nerve-cell tendrils readily thread their way through tiny semiconductor tubes, researchers find, forming a crisscrossed network like vines twining toward the sun. The discovery that offshoots from nascent mouse nerve cells explore the specially designed tubes could lead to tricks for studying nervous system diseases or testing the effects of potential drugs. Such a system may even bring researchers closer to brain-computer interfaces that seamlessly integrate artificial limbs or other prosthetic devices. “This is quite innovative and interesting,” says nanomaterials expert Nicholas Kotov of the University of Michigan in Ann Arbor. To lay the groundwork for a nerve-electronic hybrid, graduate student Minrui Yu of the University of Wisconsin–Madison and his colleagues created tubes of layered silicon and germanium, materials that could insulate electric signals sent by a nerve cell. “They seem to like the tubes,” says biomedical engineer Justin Williams, who led the research. See Also:

Daily dose of beet juice promotes brain health in older adults Researchers for the first time have shown that drinking beet juice can increase blood flow to the brain in older adults -- a finding that could hold great potential for combating the progression of dementia. The research findings are available online in Nitric Oxide: Biology and Chemistry, the peer-reviewed journal of the Nitric Oxide Society and will be available in print soon. "There have been several very high-profile studies showing that drinking beet juice can lower blood pressure, but we wanted to show that drinking beet juice also increases perfusion, or blood flow, to the brain," said Daniel Kim-Shapiro, director of Wake Forest University's Translational Science Center; Fostering Independence in Aging. "There are areas in the brain that become poorly perfused as you age, and that's believed to be associated with dementia and poor cognition." The next day, following another 10-hour fast, the subjects returned to the lab, where they ate their assigned breakfasts.

Granny army helps India's school children via the cloud 30 April 2012 Last updated at 04:33 By Jane Wakefield Technology reporter Jackie Barrow explains how she teaches children thousands of miles away No-one does love and encouragement better than a granny. Now that love is being spread across continents, as UK-based grandmothers extend their embrace to school children thousands of miles away in India. Jackie Barrow isn't a granny yet but as a retired teacher she felt she might qualify for an advert in The Guardian newspaper calling for volunteers to help teach children in India. She did and today, three years on, she is reading "Not Now Bernard" via Skype to a small group of children in the Indian city of Pune. They love it and are engaged in the experience as she holds up an Easter egg to show them how children in the UK celebrated the recent holiday. Advice and praise The Granny Cloud project is the brainchild of Prof Sugata Mitra, best-known for his hole-in-the-wall computer scheme which put basic PCs into some of the poorest parts of India.

120 Ways to Boost Your Brain Power Here are 120 things you can do starting today to help you think faster, improve memory, comprehend information better and unleash your brain’s full potential. Solve puzzles and brainteasers.Cultivate ambidexterity. Use your non-dominant hand to brush your teeth, comb your hair or use the mouse. Readers’ Contributions Dance! Contribute your own tip! There are many, many ways to keep our brains sharp. New solar fuel device that ”mimics plant life” Scientists have unveiled a prototype solar device that mimics plant life, turning the Sun’s energy into fuel. The device uses the Sun’s rays and a metal oxide called ceria to break down carbon dioxide or water into fuels, which can be stored and transported. The prototype, which has been devised by researchers in the US and Switzerland, uses a quartz window and cavity to concentrate sunlight into a cylinder lined with cerium oxide, also known as ceria. If as in the prototype, carbon dioxide and/or water are pumped into the vessel, the ceria will rapidly strip the oxygen from them as it cools, creating hydrogen and/or carbon monoxide. Hydrogen produced could be used to fuel hydrogen fuel cells in cars, for example, while a combination of hydrogen and carbon monoxide can be used to create “syngas” for fuel. It is this harnessing of ceria’s properties in the solar reactor, which represents the major breakthrough, said the inventors of the device. “It’s very much tied to policy.

How Technology is Changing the Way Children Think and Focus Thinking. The capacity to reflect, reason, and draw conclusions based on our experiences, knowledge, and insights. It’s what makes us human and has enabled us to communicate, create, build, advance, and become civilized. Thinking encompasses so many aspects of who our children are and what they do, from observing, learning, remembering, questioning, and judging to innovating, arguing, deciding, and acting. There is also little doubt that all of the new technologies, led by the Internet, are shaping the way we think in ways obvious and subtle, deliberate and unintentional, and advantageous and detrimental The uncertain reality is that, with this new technological frontier in its infancy and developments emerging at a rapid pace, we have neither the benefit of historical hindsight nor the time to ponder or examine the value and cost of these advancements in terms of how it influences our children’s ability to think. You can think of attention as the gateway to thinking.

10 Websites With Fun Tests To Gauge Your IQ Intelligence Quotient (IQ) is a term that’s related to the wattage of your brain; in short intelligence and reasoning skills measured across a few standardized tests. Before an inferiority complex starts laying its foundation, remember that I.Q is not a measure of knowledge or its practical application. To rub our egos the right way, you might take a few serious approved tests and arrive at your IQ. FunEducation Try out the array of tests on this site which include a range of serious self discovery tools and fun quizzes. 3SmartCubes If you are looking for a range of tests that measure everything from IQ to your EQ (Emotional Quotient), then this site deserves to be bookmarked. Free IQ Test Just like the name says, this site is a place for a fast, free, and accurate online IQ test. IQ League The 60 Seconds IQ Test on this site is a fun and fast test which pits you against a clock as it countdowns to the minutes on the 10 questions. own system Test Yourself Magic Mnemonic Color IQ Test IQ Test

The future is coming, in the form of internet-controlled power outlets A common theme in any form of entertainment depicting the future is the use of a remote to control everything – futuristic houses are often shown with the owner turning the lights on before they even arrive. Turns out, using the internet to control our houses is not too far away. A group of researchers from the Fraunhofer Institute for Communication Systems ESK in Munich, in collaboration with the Fraunhofer Institute for Industrial Mathematics ITWM in Kaiserslautern, have developed a new power outlet that supports the brand-new IPv6 Internet protocol. These new outlets, known as the wireless smart socket, could very well revolutionize the way we turn things on and off in our homes. “We have been able to connect the power outlets wirelessly using the IPv6 protocol,” says ESK research engineer Günter Hildebrandt. These wireless power outlets are part of the HexaBus home automation system, which is part of the mySmartGrid project. Source: Fraunhofer