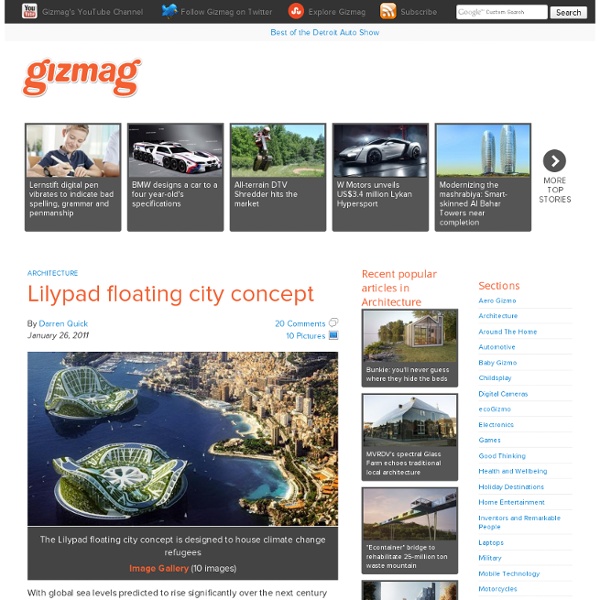 The Lilypad floating city concept is designed to house climate change refugees Image Gallery (10 images) With global sea levels predicted to rise significantly over the next century due to climate change, a lot of people living in low lying areas are expected to be displaced from their homes. Architect Vincent Callebaut has come up with a possible relocation destination for these climate change refugees in the form of the “Lilypad” concept – a completely self-sufficient floating city that would accommodate up to 50,000. View all With a shape inspired by the highly ribbed leaf of Victoria water lilies, the double skin of the floating “ecopolis” would be made of polyester fibers covered by a layer of titanium dioxide (TiO2), which would react with ultraviolet rays and absorb atmospheric pollution via a photocatalytic effect in the same way as the air-purifying concrete and paving stones we looked at last year. Via freshome. About the Author Post a CommentRelated Articles

Community Supported Agriculture Thinking about signing up for a CSA but want to learn more about the idea before you commit? Read on. For over 25 years, Community Supported Agriculture (CSA) has become a popular way for consumers to buy local, seasonal food directly from a farmer. Here are the basics: a farmer offers a certain number of "shares" to the public. Typically the share consists of a box of vegetables, but other farm products may be included. Interested consumers purchase a share (aka a "membership" or a "subscription") and in return receive a box (bag, basket) of seasonal produce each week throughout the farming season.

Vincent Callebaut Architecte LILYPAD PROGRAM : Floating Ecopolis for Climate Refugees / Mixing Uses LOCATION : Oceans SURFACE AREA : 500.000 m² PERSPECTIVES : Philippe Steels / www.pixelab.be Further to the anthropogenic activity, the climate warms up and the ocean level increases. According to the principle of Archimedes and contrary to preconceived notions, the melting of the arctic ice-floe will not change the rising of the water exactly as an ice cube melting in a glass of water does not make its level rise.

Obama Ayers Axelrod Exelon ties « Romanticpoet's Weblog Who would have thought prisoners would be used instead of out-of-work Americans for producing solar panels? June 20, 2012 Federal Prison Industries, most commonly known by the trade name UNICOR, is a wholly owned subsidiary of the U.S. Department of Justice. Established by Franklin Delano Roosevelt in 1934, UNICOR was intended as a voluntary work-training program for federal inmates. It has recently gone into business supplying federal agencies with green energy technology such as solar panels.

Giant ‘Ark’ Designed to Preserve Humans, Protect Nature In the not-so distant future, us humanfolk may have to cohabitate with a much less friendly mother nature. But such is the genius of man that he can design a home that will keep him comfortable, even as his behavior causes the climate to grow ever warmer and more prone to extreme storms, desertification to eat away the greenery, and sea levels to rise. That’s pretty much the guiding philosophy behind Russian architect Alexander Remizov’s design for ‘the Arks’ — huge, slinky-like buildings that will ostensibly preserve mankind and a few lucky plants and animals from the incoming Flood.

Peach Bottom investigation: Security officials falsified records Two security officials have been disciplined for falsifying security documents. This photo from 2008 depicts Peach Bottom Atomic Power Station. In April, a federal investigation found that two security officials at the plant falsified records. Silicon Valley's Next Disruption: Floating, Autonomous City-States A render of a future Blueseed ship, via Blueseed It’s a sunny Tuesday afternoon in Palo Alto, and seasteading entrepreneur Max Marty is trying to persuade me that putting 1,500 immigrant entrepreneurs together on a floating startup city in international waters 12 miles off the coast of San Francisco is a good idea. “The exchange of ideas and collaboration is really, really helpful in the creation of new technologies and innovations,” Marty tells me.

Limits to Growth was right. New research shows we're nearing collapse The 1972 book Limits to Growth, which predicted our civilisation would probably collapse some time this century, has been criticised as doomsday fantasy since it was published. Back in 2002, self-styled environmental expert Bjorn Lomborg consigned it to the “dustbin of history”. It doesn’t belong there. Research from the University of Melbourne has found the book’s forecasts are accurate, 40 years on. If we continue to track in line with the book’s scenario, expect the early stages of global collapse to start appearing soon. Limits to Growth was commissioned by a think tank called the Club of Rome.

Fitness Tests for Old Nuclear Reactors Photo: Amy Sancetta/AP Photo In with the new: Some components of aging nuclear plants can be replaced. This new lid for the reactor pressure vessel was installed in the Davis-Besse nuclear power station. Click on the image to enlarge. Guided-wave technology, which is rapidly maturing, is now regularly used for pipe testing in the oil and gas industry. In the nuclear industry, regulators are working to standardize the monitoring procedures. Floating Utopias for the Age of Rising Seas A two mile-thick ice sheet in Antarctica is collapsing, which all but guarantees at least 10 feet of global sea level rise. That's grim news for the 44 percent of the world's population living in coastal areas, who now face the dire prospect of preparing for the coming tides. Developing the necessary engineering solutions, as well as plans to anticipate some inevitable social and economic destabilization, will prove a daunting challenge for millions of communities worldwide. Which is why, along with the engineers, we're going to need utopianists. In 1962, haunted by the specter of nuclear annihilation, the sociologist Lewis Mumford penned a new preface to his book, The Story of Utopias. He noted that utopianism tends to thrive when civilization is in turmoil, and that far from being useless pie-in-the-sky dreaming, our utopian myths, schemes, and fictions hint at what he terms society's "potentialities."

The End of History? The short, strange era of human civilization would appear to be drawing to a close. The likely end of the era of civilization is foreshadowed in a new draft report by the Intergovernmental Panel on Climate Change (IPCC), the generally conservative monitor of what is happening to the physical world. It is not pleasant to contemplate the thoughts that must be passing through the mind of the Owl of Minerva as the dusk falls and she undertakes the task of interpreting the era of human civilization, which may now be approaching its inglorious end. The era opened almost 10,000 years ago in the Fertile Crescent, stretching from the lands of the Tigris and Euphrates, through Phoenicia on the eastern coast of the Mediterranean to the Nile Valley, and from there to Greece and beyond.

Stompy: 18 foot wide, 6-legged, rideable robot in the works Project Hexapod is aiming to make the construction of large scale robots cheaper and easier for hobbyists with Stompy - an 18 ft (5.5 m) wide, 4,000 pound (1800 kg), 6-legged hydraulic robot that you can ride. The Massachusetts-based team behind the project has already made significant progress with the giant robot and are looking to raise funds to complete the ambitious build before making it "open hardware" by releasing all of the plans, diagrams and the list of materials used in the construction to anyone brave enough to build one of their own. Hobbyist robotics is more popular and affordable than ever, but RC servos place a limit on the size of robot a hobbyist can build.

Floating Cities: 15 Last-Hope Homes for a Watery World - WebEcoist With so many visions of humanity’s future involving the devastating effects of climate change, architects are looking toward a life without land: entire self-contained cities purposefully built on water complete with housing, schools, hospitals, restaurants and shops. These floating city concepts range from recycled oil rigs to what could be the largest structure ever built (if we ever discover a material strong enough to bear the weight, that is.) Embassy of Drowned Nations (images via: oculus) As sea levels rise, it seems that some nations will inevitably sink beneath the depths, leaving behind thousands or perhaps millions of displaced residents. We may hope that the Embassy of Drowned Nations is never actually needed, but time will tell.

The future is coming, in the form of internet-controlled power outlets A common theme in any form of entertainment depicting the future is the use of a remote to control everything – futuristic houses are often shown with the owner turning the lights on before they even arrive. Turns out, using the internet to control our houses is not too far away. A group of researchers from the Fraunhofer Institute for Communication Systems ESK in Munich, in collaboration with the Fraunhofer Institute for Industrial Mathematics ITWM in Kaiserslautern, have developed a new power outlet that supports the brand-new IPv6 Internet protocol. These new outlets, known as the wireless smart socket, could very well revolutionize the way we turn things on and off in our homes.

China looking seriously at creating artificial islands that near the scale of Manhattan as they also literally level Mountains for City Space A new floating city designed by AT Design Office and the Chinese construction firm CCCC, is slated to begin development on a pilot scale next year. “When the client came to us and talked about this project, I couldn’t believe it was true until I saw their technology,” says Anthony Phan, an architect at AT Design Office. CCCC, which commissioned the design, is currently building a 31-mile long bridge between Hong Kong and Macau using the same type of floating modules that will make up the new city. Large prefab blocks join together to form the base of the 10-square kilometer island [Manhattan is 59 square kilometers], which will be filled with everything you'd expect on land.