Join our next cohort! Applications for cohort #4 are closed! 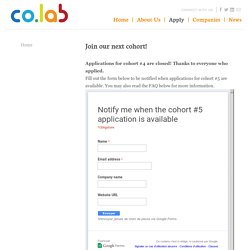 Thanks to everyone who applied. Fill out the form below to be notified when applications for cohort #5 are available. You may also read the FAQ below for more information. Is this program right for my startup? Applications for co.lab are open to any startup (for-profit or non-profit) with one or more technology products focused on using the power of games to improve academic and/or social outcomes for PK-12 students. We work with companies at a variety of stages — anywhere from company formation (pre-seed) all the way to Series B or beyond. Preference will be given to teams with innovative products, ideas or prototypes that demonstrate significant promise for producing transformative effects on teaching, learning, and/or education in general. 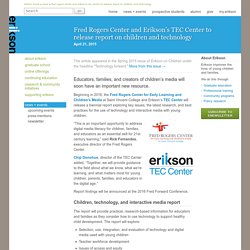 Beginning in 2016, the Fred Rogers Center for Early Learning and Children’s Media at Saint Vincent College and Erikson’s TEC Center will release a biennial report exploring key issues, the latest research, and best practices for the use of technology and interactive media with young children. “This is an important opportunity to address digital media literacy for children, families, and educators as an essential skill for 21st century learning,” said Rick Fernandes, executive director of the Fred Rogers Center. Chip Donohue, director of the TEC Center added, “Together, we will provide guidance to the field about what we know, what we’re learning, and what matters most for young children, parents, families, and educators in the digital age.” 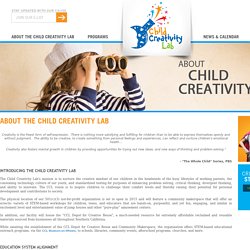 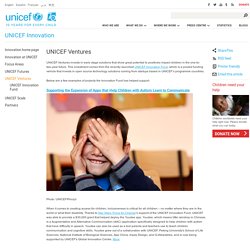 This investment comes from the recently launched UNICEF Innovation Fund, which is a pooled funding vehicle that invests in open source technology solutions coming from startups based in UNICEF’s programme countries. Below are a few examples of projects the Innovation Fund has helped support. Supporting the Expansion of Apps that Help Children with Autism Learn to Communicate Photo: UNICEF/Pirozzi When it comes to creating access for children, inclusiveness is critical for all children – no matter where they are in the world or what their disability.

Making Proprietary Software OpenSource in South Africa Photo: UNICEF/Schermbrucker MomConnect in South Africa is an SMS-based maternal reminder program for pregnant women implemented by UNICEF in partnership with the Department of Health. About Us — The Exploratory. Jean Kaneko is sought after program/curriculum developer and speaker in the world of STEAM education and Making. 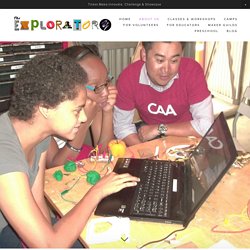 An early adopter of making as an engagement strategy, she has been teaching STEAM subjects in formal and informal education programs such as after school, in-class, camps to both children and educators since 2011. Early days of tinkering in the garage and the dark room with her father led her to a career working in media that combined science, technology and art.

She studied psychology and film in college and went on to work at the world’s first HDTV production companies in NY in the 80′s. Among many firsts, she worked on live HDTV satellite broadcasts from NY to Japan and was part of a team that developed programming that showcased the newest High Definition equipement. Max is a social theorist and martial artist by training, but a maker at heart. Lemelson Center for the Study of Invention and Innovation. First Book. Education. 1. 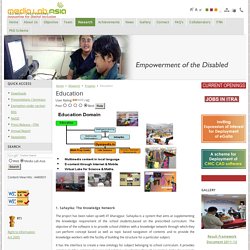 Sahayika: The Knowledge Network The project has been taken up with IIT kharagpur. Sahayika is a system that aims at supplementing the knowledge requirement of the school students,based on the prescribed curriculum. The objective of the software is to provide school children with a knowledge network through which they can perform concept based as well as topic based navigation of contents and to provide the knowledge workers with the facility of building the structure for a particular subject. It has the interface to create a new ontology for subject belonging to school curriculum. 2. The objective of the project is to train the teachers of rural schools to develop multi-media content using an open source multimedia authoring tool and to design Virtual Physics Lab (VPL) experiments for the rural school children, which do not have access to physics laboratory infrastructure in their schools. 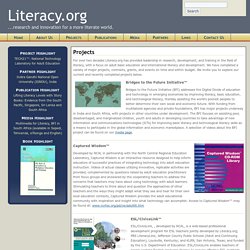 The program, with ran for about a decade up until 2000 included several weeks of training, including workshops and seminars, and a number of informative visits to local literacy centers and institutions. About Microsoft Research Asia. Microsoft Research Asia, founded November 5, 1998 in Beijing, is Microsoft’s basic research facility in the Asia-Pacific region. 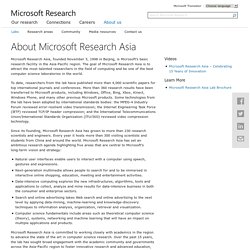 The goal of Microsoft Research Asia is to attract the most talented researchers in the field of computing and be one of the best computer science laboratories in the world. To date, researchers from the lab have published more than 4,000 scientific papers for top international journals and conferences. More than 360 research results have been transferred to Microsoft products, including Windows, Office, Bing, Xbox, Kinect, Windows Phone, and many other previous Microsoft products. Some technologies from the lab have been adopted by international standards bodies: the MPEG-4 Industry Forum reviewed error-resilient video transmission; the Internet Engineering Task Force (IETF) reviewed TCP/IP header compression; and the International Telecommunications Union/International Standards Organization (ITU/ISO) reviewed video compression technology.