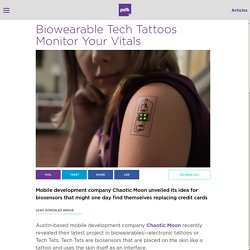 Tech Tats are biosensors that are placed on the skin like a tattoo and uses the skin itself as an interface. The electronic tattoos are essentially made up of electroconductive paint and circuitry components that all work together to collect, store and send bio data. Hack Your Mood With Chromotherapy Glasses. Crown & Flint's sunglasses lets you swap out lenses so as to improve your balance, awareness, and creativity Crown & Flint is an eyewear brand that is as concerned with your emotions as with your style. 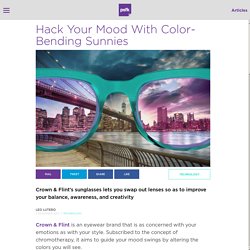 Subscribed to the concept of chromotherapy, it aims to guide your mood swings by altering the colors you will see. Chromotherapy, or color therapy, is an alternative medicine method which uses our experience of colors to achieve physical or mental changes. These sunglasses explore this concept with swappable lenses in different colors. Each color is associated with a certain mood. Color therapy might not have a lot of science to back it up, but colors and the emotions we feel are surely related. GE Smart Bulbs Adjust Light Color In the Name of Your Health.

The C Sleep light bulb changes from blue to orange to soft yellow throughout the day to support healthy sleep patterns Too much manufactured lighting at night can severely disrupt the human body’s natural sleep patterns, but not every color has the same effect. 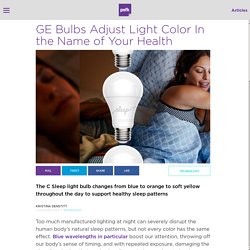 Blue wavelengths in particular boost our attention, throwing off our body’s sense of timing, and with repeated exposure, damaging the circadian rhythm that our body relies on to know when to begin shutting down for sleep. Apps like f.lux address this growing issue in relation to electronics, but the blue light emitted by energy efficient light bulbs at night still poses a problem. Based on the scientific research of light and how it affects human behavior, GE is rolling out its take on smart light bulbs, called C by GE.

While many smart light bulbs are currently on the market, the available options focus on bluetooth functionality and color variety, not healthy living. Knock Out Cancer With an Interactive Punching Bag. The Interactive Punching Bag helps you knock cancer cells out of the ring and raise funds in the process In life, we are told to pick our battles. 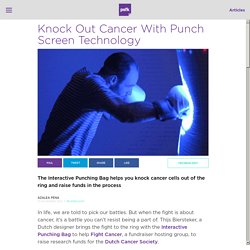 But when the fight is about cancer, it’s a battle you can’t resist being a part of. Thijs Biersteker, a Dutch designer brings the fight to the ring with the Interactive Punching Bag to help Fight Cancer, a fundraiser hosting group, to raise research funds for the Dutch Cancer Society. When it comes to fighting cancer, it is easy to band people with a common cause—taking down cancer once and for all. Microsoft Facial Recognition Guesses Your Emotions. Microsoft's beta tool guesses people’s emotions through facial recognition software. 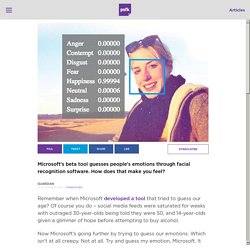 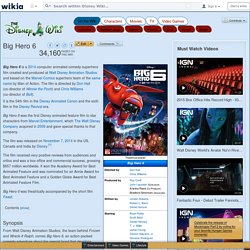 Big Hero 6 was the first Disney animated feature film to star characters from Marvel Entertainment, which The Walt Disney Company acquired in 2009 and gave special thanks to that company. The film was released on November 7, 2014 in the US, Canada and India by Disney.[1] The film received very positive reviews from audiences and critics and was a box office and commercial success, grossing $657 million worldwide. 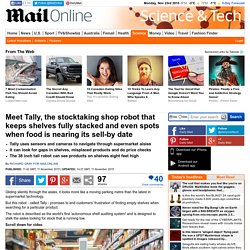 Robot hotel: inside Japan's Henn na Hotel. “I was happy to come here, it’s an exciting hotel,” he enthuses, as we take a stroll through Truman Show-perfect gardens. 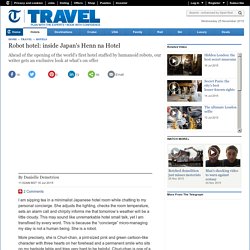 “I’ve always been interested in robots, they are the future.” • Henna na robot hotel - in pictures. Goodbye privacy, hello Alexa: here's to Amazon echo, the home robot who hears it all. Google Driverless Cars Will "Chat" With Pedestrians. A patent from the conglomerate reveals how these vehicles will communicate with people on the road such as by flashing a message when it's “safe to cross" A new patent reveals that Google driverless cars will be far more eloquent than honking when dealing with pedestrians. 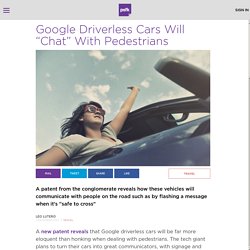 The tech giant plans to turn their cars into great communicators, with signage and verbal dictations onboard the vehicle.